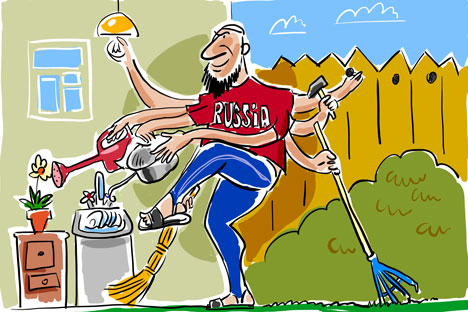 The idea that it is high time for Russia to start learning how to live without immigrants has been on all kinds of different minds lately. Russian people are trying to figure out how to rebuild the economy so that their country no longer needs imported labor.

Click to enlarge the image. Drawing by Alexei Iorsh.

This is the wrong way to frame the issue. Putting an end to immigration would mean abandoning Moscow’s status as a world-class city, while also jeopardizing many industries that would experience labor shortages after a while.

Appeal is an important criterion for a developed society that is able to attract and naturalize a fairly diverse set of people eager to come to the country to work or study. If Russia is to be a global leader and Moscow a world-class city, they must become attractive places for immigrants. Between 10 percent and 15 percent of foreigners living in a capital city is the international norm. In this sense, discussing how to cope without immigrants demonstrates a lack of understanding of the issues involved and a narrow-mindedness of Russia’s collective conscience.

Inflow of migrants to Russia - a necessity - Migration Service

Any discussion of immigrants’ wild behavior in Russia must take international experience into account. There is a huge body of psychological and sociological studies on the subject of immigration. They say that the behavior of immigrants in their host countries is the litmus test that reveals the real – rather than stated – cultural customs of the society in question. Immigrants behave the way the natives do – something that has been demonstrated over and over again in different countries.

It may surprise some, but immigration into Russia is now far from its peak. On the contrary, it is now in decline. Immigration peaked in the mid-1990s, and has been declining since 1999. The decline is so bad now that many industries have been experiencing labor shortages. This is a common situation across the world, where native populations are selective in their employment choices.

Russia started creating conditions for attracting Russian-speaking immigrants in order to resolve this problem in 2002, but their numbers had already peaked by then. Those who wanted to come had done so in the 1990s, even though no legal or organizational framework had been put in place by then. Russia lost its chance to capitalize on one resource inherited from the Soviet Union – an educated and highly skilled flow of immigrants from CIS countries that are familiar with Russian culture.

This flow – from places such as Ukraine, Moldova, and Transcaucasia – headed to Europe instead. This happened precisely because Russia lacks a naturalization system and is not a desirable place for immigrants. Statistics corroborate this conclusion: according to a Gallup poll, Russia ranks 56th in terms of relative immigration appeal.

Natives of metropolitan areas are under the impression that the number of immigrants is not regulated at all these days, even though statistical data shows that immigration is shrinking. The illusion of an invasion is due to the fact that immigrants tend to concentrate in large cities where job opportunities are available. Native residents of those cities are mostly unhappy about the low labor skills of immigrant job-seekers; but Russia has nothing to offer highly skilled specialists, because its environment is so uncomfortable. This brings up the concept of “immigration quality,” which is determined by the quality of the host country.

Experience elsewhere suggests that a country must, first of all, set a clear short-term objective, i.e., when, how many and what kind of immigrants it will need. Secondly, the process of bringing in labor resources must begin in the country of origin. For example, Americans operate a network of centers all over the world where people can take an English test, obtain information about the country and apply for a green card.

Once in America, the huge naturalization machine starts working with immigrants. They are immersed in local culture, taught American history and English language, and receive help finding a job, if necessary. Millions are involved in working with immigrants in the United States – but what about Russia? As long as the police are the only participant of the process here, it is clear that nothing constructive will come out of it.

In order to have complete control over the immigration flow, it is necessary to build a welcoming infrastructure and engage in integration and adaptation. This includes cultural integration and adaptation, such as teaching the language or cultivating social and cultural norms. Large-scale socio-cultural conditioning is a function of any capital city (or any big city, for that matter).

A big city always gives people the opportunity to get on their feet. It adapts people to a new environment and helps them move forward and go elsewhere. That is how life works. That is why Russia needs to accept that any city is a common public resource, and keeping it in order requires consensus. If Russia does not want immigrants to gather and dance in public squares, it needs to create community centers where they can go – build a synagogue for Jews and a mosque for Muslims.

Moscow has been a magnet for labor resources for years. It played that role throughout the Soviet era. Even now, people often migrate from one region to another, via the capital. Now that the mobility of Russia’s population has not substantially increased and labor is in short supply across many industries and regions, it is obvious that a portion of the flow from CIS countries has been diverted here.

As for the perception of newcomers by native Russian, this is hardly a new problem for Moscow. Everything that is said about immigrants today used to be said about people coming here from other Russian regions. Ever aggressive towards anything that is alien, Muscovites themselves are a big part of the problem.

Pyotr Schedrovitsky is an advisor to the CEO of Rosatom Corporation, and deputy director of development at the Institute of Philosophy of the Russian Academy of Sciences.

The full version was first published in Russian in Vzglyad.