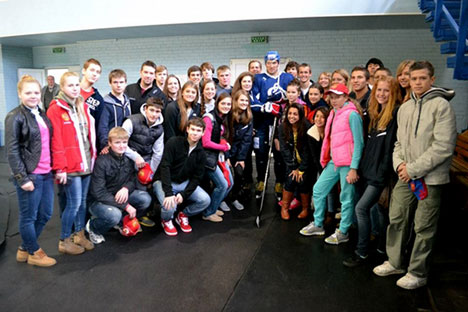 Earlier this month, a group of 20 enthusiastic young American ice hockey players and four coaches came to Moscow as Youth Sports Envoys to build stronger ties between the United States and Russia, both on and off the ice.

Over the past four years, both countries have sent and hosted high school swimmers, basketball, beach volleyball, and ice hockey players, and coaches in a series of eight exchanges under the U.S.-Russia Bilateral Presidential Commission.

We kept this group of ice hockey players very busy during their week-long exchange. At our reception in their honor, I loved hearing about their master classes conducted by Igor Tuzik, Vice President of the Russian Hockey Federation, and by Olympic Gold Medal winners Vladimir Myshkin and Vitaliy Prokhorov. The young Russian and American players got to talk with Soviet hockey legends Vladislav Tretyak and Aleksandr Yakushev about their Olympic gold medal winning experiences. They also attended team practices of two professional KHL teams, CSKA and Dynamo, and had meet-and-greets with NHL players Sergey Fedorov, Pavel Datsyuk, Ilya Bryzgalov and Alex Ovechkin.

But best of all, we saw the participants engage with each other and with their Russian peers during training sessions, in their free time, and on cultural trips. They were put through drills on edge work and agility alongside young Russian players. Local secondary school students welcomed them into their classrooms and taught them about the local sport of floorball. These young athletes have had a unique opportunity to learn more about one another’s cultures and values through their shared love of sports. As we look forward to new ways we can enhance bilateral relations with Russia, sports exchanges like this one help us to see all that we have in common, even across language barriers.