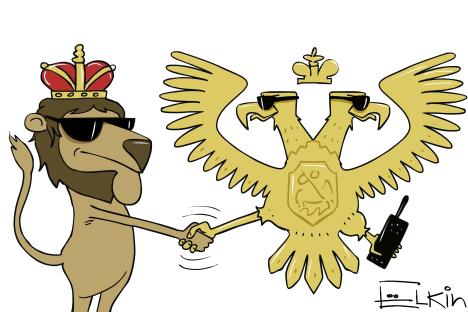 The media seems to be getting M.I. High, like in the BBC TV children's spy-fi adventure series of the same name. Now, even The Daily Mail asks, in a recent headline, if Alexander Litvinenko was killed ‘by British spooks’. Do they really mean MI6?

It's the same moral frivolity and ease with which, just a few years ago, it was suggested that ‘Russian spooks’ were involved. Well, although one may say it would suit my fellow Russians to pin the Litvinenko murder on MI6, I am relieved to see that no such conspiracy theories find much support - either in Russian officialdom or among the Russian public.

Watching the film Skyfall just a few days ago, I couldn't help but recall SPECTRE (SPecial Executive for Counter-intelligence, Terrorism, Revenge and Extortion), a fictional global terrorist organisation featured in the older James Bond movies. So, while SPECTRE has vanished from the recent Bond films, it apparently hasn't – so far – from the international arena, albeit it may not have the same name. The elements of Ian Fleming's SPECTRE can be recognised in such mafia syndicates as various gangster rings, the Sicilian Mafia, the ‘Unione Corse’ of France, the Chinese Triads, the Japanese "Yakuza" and the Mafia from the former Soviet Union, particularly the Georgian Mafia.

The role and scope of the latter, until recently, remained unknown. In order to understand it better, we have to cite the book about the oligarch Boris Berezovsky, written by the American journalist of Russian descent, Paul Khlebnikov. In 1993 ‘out of sixty thieves professing-the-code (the closest equivalent to the godfather of the Sicilian and American mafia)’, Khlebnikov wrote, ‘more than half were from the Republic of Georgia’.

Khlebnikov tells us that the Georgian Badri Patarkatsishvili, one of the co-founders of the car dealer LogoVaz, was Berezovsky’s link to that Mafia underworld.

Klebnikov himself was murdered, then Patarkatsishvili died in the UK in suspicious circumstances. Then there was the murder of journalist Anna Politkovskaya – to name but a few.

It has also been claimed that the death of Litvinenko was connected to Berezovsky. Former FSB chief Nikolay Kovalyov, for whom Litvinenko worked, said that the incident ‘looks like [the] hand of Berezovsky. I am sure that no kind of intelligence services participated’.

We can only guess at what ‘underworld’ powers, influences and characters are at work in London and elsewhere at this very moment. Suddenly, the whole world feels like "a riddle wrapped in a mystery, inside an enigma”. What about Mario Scaramella, who had a meeting with Litvinenko in the "Itsu" sushi bar before the latter met Lugovoy in the "Millenium" hotel? Scaramella, tested positive for polonium in a London hospital, was once reported to have had enough radiation in his body to die a few times over, and yet so far ... hasn't lost his hair, his life or his vigour. Can this "Don Corleone" turn to them "spooks", who "don't respect nothin'"? Does he have "intel" one can't refute?

It is reported that the candidate for the post of Prime Minister of Georgia, Bidzina Ivanishvili, said that the war in South Ossetia in 2008 was initiated by the Georgian President Mikhail Saakashvili. ‘Saakashvili and I - we are on the same side", Berezovsky told the Georgian magazine ‘Tabula’. What he means, and what other secrets he possesses (perhaps shared only with his now deceased confidant, Badri Patarkatsishvily), can only be deciphered by the very ‘spooks’ from MI6 and the FSB who themselves can become an easy target in the webs of trickery and deception created by the powerful figures of the underworld.

We do know that Russia, like the UK and the US, has its own arch-enemies in the form of terrorists and criminal masterminds, the ‘Moriartys’ of our time. Conan Doyle based his Professor Moriarty on the American astronomer Simon Newcomb. Newcomb was revered as an evil genius, with a special mastery of mathematics, and he earned a reputation for nastiness and malice, seeking to destroy the careers and reputations of rival scientists.

Quite a few of those could measure up to Newcomb's ‘talents’ among Putin's enemies. Instead of sensationalist ‘spy-fi’, trying to pin the terrible crime on British, Russian or ‘you-name-it’ ‘spies’, the media should look into international organised crime. But the latter is more likely to sue, taking advantage of the UK libel law, so ... MI6 or FSB, Putin, Cameron, Blair or Bush (the favourites among the conspiracy theorists) become far easier targets for the media.

Perhaps, MI6 and the FSB (who are now considered as "interested parties" in the Litvinenko inquest) should take clues from Ian Fleming's James Bond. He out-smarted SPECTRE’s efforts to instigate a conflict between the East and the West, hoping that MI6 and the KGB would exhaust themselves, and the superpowers become vulnerable.

So, should ‘M’ give KGB chief ‘General Gogol’ a call? Perhaps it's about time – before the sky falls on both. After all, if polonium (actually part of the trigger for the bomb that fell on Nagasaki) ended up in SPECTRE's hands, we will need the ‘spooks’ and the police on both sides to put their heads together. Please, the sooner the better.

Alexander Korobko is the producer of Russian Hour TV (London).