Nostalgia for the Brezhnev era 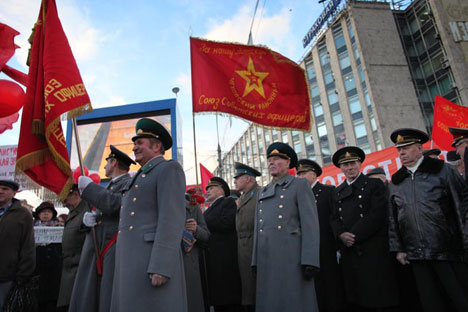 Although Brezhnev’s 18 year rule was a period of stagnation, many look back at those days with positivity.

Soviet leader Leonid Brezhnev, who ruled the Soviet Union for 18 years from 1964 to 1982, died 30 years ago, on November 10, 1982.  Russia has had its share of tyrants and bloody dictators, but the last “classical-style” leader of the Soviet times evokes feelings of condescension with a touch of warmth and nostalgia.

Many people, whose youth coincided with the times of stagnation, rue the days when everyone apparently had a good level of social security and “confidence in tomorrow.” But this era is slowly vanishing from public memory and present-day school students are more familiar with pop singer Vera Brezhneva than the omnipotent Soviet leader of that time.

Among the achievements of Brezhnev’s era, people most frequently recall his successes in international diplomacy and the nuclear detente policy, which the Soviet leadership pursued consistently. By the early seventies, the Soviet Union and the United States reached a military parity and concluded several important treaties to curb the arms race. The decisions taken in those years mainly determine modern geopolitical realities up to now.

Among the obvious advantages of the stagnation period are the achievements in space exploration, science and technology, aviation, shipbuilding, metalworking and energy. Roads were being built rapidly, the housing and public utilities sector was developing quickly and crime was being seriously combated. During the Brezhnev era, 1.6 billion square metres of housing was built with 161 million people receiving new houses during those years.

Members of the public tend to overlook Brezhnev’s use of force when five Warsaw Pact countries crushed the 1968 Prague Spring led by Alexander Dubcek. The Slovak politician was briefly the leader of Czechoslovakia (1968–1969) and was famous for his abortive attempt to reform the Communist regime during the Prague Spring.  It was also Brezhnev who sent Soviet Troops to Afghanistan in December 1979.

Brezhnev’s manhunt of dissidents cannot even be compared with the atrocities of the Stalinist times; however it created a heavy ideological and moral climate in the society. The persecution of dissidents, including the exile of human rights activist Andrei Sakharov (a nuclear physicist, who developed the first megaton-range Soviet hydrogen bomb) was a hallmark of the Brezhnev era. There was also the shocking construction of the BAM (the Baikal-Amur Mainline) railway that was launched in 1974 and is not complete to this day.

Socialism lost its historical battle to Capitalism in the economic sphere. Inefficient production led to a total deficit. But now Russians remember those times with nostalgia. Those were the days when they received special ‘food rations’ at the workplace for the holidays. These food rations included raw smoked sausages, which could not be bought at the shops. However nobody really imagines going back to those times, when people were standing in line for many hours to get ‘difficult-to-obtain’ products.  No one wants the compulsory dispatching of students and intelligentsia for potato harvesting. The nepotism among the top Communist party functionaries should also be added to the foresaid facts.

“Brezhnev’s epoch was contradictory,” Corresponding Member of the Russian Academy of Sciences and head of the Centre of Civilization Studies Timur Timofeyev told Itar-Tass. “On the one hand, this era was characterised by its stability, which was almost unprecedented in Russia. Brezhnev’s personal qualities, such as a well-balanced attitude towards the people, were particularly valuable when compared to Stalinist times. There were special successes in foreign policy and indisputable successes in the social sector. The expenditure on education and science were high,” Timofoyev said.

Timofeyev named “a non-dynamic employment policy, the stagnation in the workforce and the lack of changes in the elite” as doubtless negative phenomena of Brezhnev’s rule. A more dynamic work environment is needed and that is one of the main lessons that should be drawn from Brezhnev’s epoch, he believes.

Sociological surveys show that Brezhnev’s epoch and the personality of the leader mainly evoke positive recollections among the overwhelming majority of older generation Russians, though many people do not want to go back to this epoch.

Some 61 percent of respondents polled by the Public Opinion Fund (FOM) in 2006, when Brezhnev’s 100th birth anniversary was marked, recalled the years of his rule as good times for the country and only 17 percent - bad times. Some 50 percent of Russians believe that Brezhnev played a positive role in the history of the country, 16 percent, think he played a negative role.

Meanwhile, only 36 percent of respondents wanted “to return the country to that historical period, when Brezhnev ruled it, with all typical features and peculiarities of the life in those years,” 42 percent opposed such comeback in the past.

The VCIOM sociological survey, which was conducted five years later, in 2011, showed that most respondents (a total of 45 percent) have positive associations about the term “Brezhnev’s era”: “It was a good time, a good calm life, stability, confidence in tomorrow, the belief in a fair future, affordable and gratis services, good prices, there were some food products in the shops, there was no unemployment, a stable salary, peace and friendship between the peoples.” 25 percent of those polled have negative associations: “stagnation, deficit, long queues, speculation, food coupons, a hard life, bans, censorship and the Iron Curtain.”

35 percent of respondents could not answer the question, as Brezhnev’s epoch indicates nothing to them.

According to the recent public opinion poll conducted by the Levada Centre, 45 percent of young people in the age brackets between 16-18 years stayed undecided about their evaluation of Brezhnev’s era. 44 percent of school students are unaware about the manhunt of dissidents in Brezhnev’s era, 54 percent of respondents do not have the slightest idea about the Soviet invasion of Czechoslovakia in 1968.