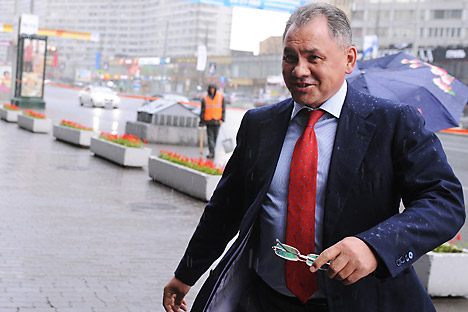 The appointment comes at a time when the Russian Armed Forces are at a crossroads, which may also prove to be an event of great importance for the future of Indo-Russian military cooperation.

The sudden dismissal of Defence Minister Anatoly Serdyukov by Russian President Vladimir Putin on November 6 took the Russian media off  the guard, creating a sort of storm, filled with likely ominous portents of never-ending power struggle at the Kremlin. Even more surprising in the whole series of dramatic events, mixed especially with “defence scams and romance” allegedly involving Serdyukov, was that Putin appointed the serving Moscow Region governor and former Russian Emergency Situations Minister Sergei Shoigu as the new Defence Minister. The President announced Shoigu’s appointment at a meeting with him at his residence in Novo-Ogaryovo, outside Moscow, the “unexpectedness” of which was openly admitted by the new Defence Minister himself.

Serdyukov’s removal and appointment of Shoigu comes at a time when the Russian Armed Forces are standing at a crossroads, which may also prove to be an event of great importance for the future of the Indo-Russian military-technical cooperation. Last month, Serdyukov visited India to co-chair the 12th meeting of the Indo-Russian Inter-Governmental Commission on Military-Technical Cooperation (IRIGC-TEC) with his Indian counterpart A.K. Antony. During the talks, the sides reviewed the progress of the bilateral defence ties with their main focus on the key problems to be urgently resolved for further development of the military-technical cooperation, ahead of the Putin-Manmohan summit in New Delhi on December 24.

After all, India is currently the top importer of Russian military equipment, with about 28 percent of Russian arms exports. Despite, delays and steep cost escalation of military equipment, Russia remains India’s largest supplier of arms, accounting for 70 percent of country’s arms imports. India plans to spend about $100 billion over the next 10 years to modernize its Soviet-era weaponry.

When Putin appointed Serdyukov as Defence Minister in 2007, he entrusted him with the job of carrying out reforms in the Armed Forces. In the past six years, he has radically changed the Armed Forces, not only reducing the staff and changing the staff organization, but also increasing the wages by five times and launching the mass-rearmament programme.

Serdyukov reformed the Russian Armed Forces, based on the mobilization of the Soviet Army, making irreversible steps towards a new army. He also terminated the old system of purchasing “obsolete weapons” from Russian military-industrial complex, rather preferring to buy French Mistral amphibious assault vessels, Israeli drones, Italian armoured vehicles and other foreign armaments.

According to some military experts, in the process of conducting the sweeping reform, Serdyukov created a strongly entrenched coterie of powerful enemies in the country’s defence establishment and military industrial complex. His control over Russia’s defence budget had also earned him foes among ambitious Kremlin figures, including Deputy Prime Minister Dmitry Rogozin, who oversees Russian defence industry, media reports said.

However, most of the media reports, suggested that Putin removed Serdyukov because he was deeply mired in an unfolding corruption scandal around Obronoservis, a Defence Ministry-owned company which has been allegedly involved in real estate scam of about $100 million. Russia’s top Investigative Committee raided and conducted searches of the offices belonging to Oboronservis on October 25, for the sale of Defence Ministry assets at prices below market value. While announcing the Shoigu’s appointment, Putin also mentioned purposively about the corruption scandal.

As Shoigu is currently busy in reshuffling the high echelon of the Defence Ministry, he has to face many challenges, including the modernisation of weapons for the army, improving the management system and controlling the wide-spread corruption in the defence establishment and defence industry.

This is where the new Defence Minister is urgently required to come to the grips of the issues which have marred the smooth functioning of the Indo-Russian defence ties recently. It also assumes significance in view of the fact that India and Russia are currently engaged in finalising several major defence deals to be signed during Putin’s visit to India. The military-technical cooperation between the two countries, is rightly considered as one of the main pillars of the bilateral strategic partnership, launched by Putin during his visit to India in 2000.

According to observers, Shoigu’s main priority, in this connection, is that he will have to acquaint himself and come to terms with the Indian side in order to resolve the  problems, the two sides are facing in the sphere of bilateral military-technical cooperation in the run up to Putin’s visit to the best mutual interest of “special, privileged strategic partnership.”

Undoubtedly, there are difficulties in the bilateral military-technical sphere and orders on the military side with many projects pending, and Shoigu may take different approach to resolve some of the problems from his predecessor, they pointed out.

Despite the recent visits to New Delhi by Serdyukov and Rogozin, India is not certain that Russia will stick to the new delivery schedule of modernised heavy aircraft carrier Admiral Gorshkov (renamed INS Vikrmaditya) or would not demand from India to cover additional expenses on its renovation, leading Russian business daily Kommersant said, stressing these problems.

Admiral Gorshkov’s handing over to India has been delayed by a year after technical glitches during its sea trials. As a result, Russian media reported, the carrier may not be delivered to India until the fall of 2013.

Russia has claimed it was the Indian Navy that insisted on brick insulation for the boilers, instead of the usual asbestos coating and would therefore claim additional expenses in the name of dry dock maintenance.

India recently indicated that it may impose a five percent penalty ($110 million) for the delay in handing over the carrier, which is being completely retrofitted at a cost of $2.3 billion.

India is also concerned about the delays in other projects such as the three Talwar Class follow on projects. It is also an open fact that there are tensions between the two sides about the implementation of another promising project, on design of the Fifth-Generation Fighter Aircraft (FGFA). According to the Kommersant, India has allegedly lost interest in the project and would like to reduce its in financial involvement, which is not in line with Moscow’s plans. India had also repeatedly expressed concern over the protected delays of the joint project to develop a multirole Military Transport Aircraft (MTA).

Last week, RIA Novosti news agency reported quoting a source close to the Indian Defence Ministry that the sides signed two contracts worth an estimated $240 million, for the delivery of Russian anti-tank missiles. Of course, Shoigu will have to immediately focus on the scheduled supply of these missiles in view of the critical shortage of ammunition in the Indian Army.

Shoigu (57), a four-star army general, is best-known for his long tenure as Emergency Situations Minister and during two decades of his public life, he has never been tainted with any corruption scandal. Moreover he has also remained a close and trusted Putin ally, but with little connection to the Russian military itself.

On his part, Shoigu’s Indian counterpart Antony is also reputed for his integrity and probity in the public life, who is trying to put into place systems for indigenisation of defence research and development and production in India.

The “personal chemistry” between the two defence ministers and cordial nature of traditional friendly defence ties between the two countries, are surely to make it easy for them to smoothly interact and operate and give an additional impulse to further boost the bilateral military-technical cooperation.