U.S. isn't a model of democracy for Russian Foreign Ministry 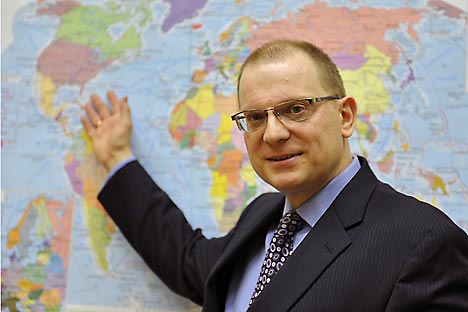 Dolgov: Russia's democracy rating is lower. But how long has Russia been on the path of democratization, compared to the United States? In terms of time, the comparison is meaningless. Source: Kommersant.

Russia's Commissioner for Human Rights Konstantin Dolgov speaks about the problems of democracy in the United States.

In late October the State Duma discussed the Russian Foreign Ministry's first report on human rights in the United States. Konstantin Dolgov, the coordinator of the report and Russian Foreign Ministry Commissioner for Human Rights, Democracy, and the Rule of Law, tells Kommersant's Elena Chernenko why Moscow has suddenly undertaken what it used to consider interference in others' internal affairs and explains why it has always been critical of Washington.

Kommersant: Why was the report about the U.S. in particular?

Konstantin Dolgov (K.D.): The Americans continue to position themselves illegitimately as the absolute authority and indisputable leader in the area of democracy and human rights. They try to instruct other countries in how to build democracy. Often, their attempts border on outright interference in internal affairs. Unfortunately, Russia is one of the countries facing this problem. Meanwhile, our report shows that the situation regarding human rights in the U.S. itself is far from ideal.

Kommersant: Where did you draw the data for these conclusions?

Russian report on human rights in U.S. indicates that American democracy is nor perfect

K.D.: The U.N. Council on Human Rights and the U.N. High Commissioner for Refugees, Human Rights Watch, Amnesty International, American NGOs, and the International Association of Journalists. In January, the renowned NGO Reporters without Borders significantly downgraded the U.S. in its annual Press Freedom Index: the country dropped 27 places to 47th.

Kommersant: But Russia lies 142nd in this ranking.

K.D.: Yes, Russia's rating is lower. But how long has Russia been on the path of democratization, compared to the United States? In terms of time, the comparison is meaningless.

Kommersant: You believe that the U.S. is not a model of democracy?

K.D.: Absolutely. No one can be a model of democracy. Not the U.S., not France, not Switzerland. There are problems everywhere – they just vary in size and nature. But no one has the right to dictate its own canon of rules.

Kommersant: Doesn't the fact that Russia is now highlighting other countries' gaps allow the West to indulge itself in even more bear-baiting?

K.D.: How can they bait Russia even more? Criticism of Russia by the U.S. and some EU countries is already so overblown that there's nowhere left to go. However, we are not afraid. Our response to the many critical reports against us is restrained.

Kommersant: We say that they are not objective.

K.D.: If they are not objective, we say so. For example, the U.S. State Department's report on religious freedom in the world repeats the same old mantra, year-after-year, that no longer corresponds to the actual situation in Russia. And, in its last report, the U.S. did in fact recognize this to a certain extent.

Kommersant: It plainly states that the Russian Orthodox Church is in cahoots with the authorities.

K.D.: That's still in there. But elsewhere the rhetoric has been toned down. And we are ready for dialogue. We expect our report to provoke a response and the Americans to draw conclusions from it.

Kommersant: Does this report not constitute interference in the internal affairs of the United States and a violation of its sovereignty?

K.D.: Russia does not say that criticism is interference. However, such criticism can indeed develop into interference. If we started to fund American NGOs with a certain political agenda, it could be regarded as interference in internal affairs.

Kommersant: Will Russia's Foreign Ministry produce any more reports on human rights in the world?

K.D.: Yes. The next may appear very soon.

The full article was first published in Russian in Kommersant.