Birds flying to the North 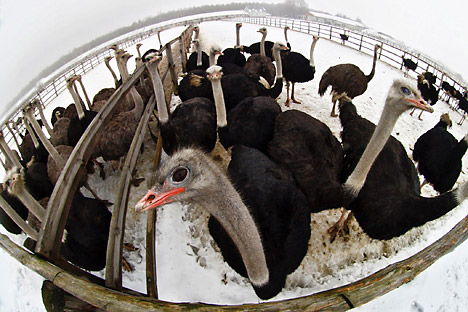 Ostriches have inhabited the planet for 70 million years and have lived through more than one ice age. Source: Ivan Rudnev / RIANovosti.

The first 15 ostriches arrived on this small farm near the village of Molochny in Murmansk Region in 2007. The Andronakis began their family business with them.

The acquaintance of an ostrich is best made with a mop in one’s hands. “The mop is your ‘argument’,” explains Artyom Andronaki, an ostrich keeper. “In a flock of ostriches, the tallest bird calls the shots. If you’re not particularly tall, don’t even try to throw your weight around with an ostrich. It could end very badly.” Making a sad face, he adds: “The ground here is frozen, it’s expensive to bury a person in the extreme North…”

A relative of the dinosaur

The birds are not exactly from Africa, but from Lithuania. “Friends thought we were crazy when we told them we wanted to raise ostriches,” says Artyom, laughing. “Most people associate ostriches with Africa and the African heat. But our beautiful birds arrived in Murmansk when there was snow on the ground.”

Catching up with the northern lights in Russia's Arctic Circle

During that polar night, the ostriches were led out of their trailer with socks on their heads: they looked more like hostages. The socks were used in an effort to lessen the shock of these guests from the sunny continent of Africa. In complete darkness, the birds took their first steps over snow in this polar region.

The birds came from Alexander Sklyar, a famous factory owner. Sklyar had been raising ostriches for a decade and had delivered birds to customers throughout Russia, Kazakhstan, Belarus, and Uzbekistan. He had even dealt with a sheikh in the Arab Emirates. But he had never sent any of his birds so far north.

Few believed in the Andronakis’ endeavor. They imagined the poor birds cooped up, shivering by electric heaters and dying of bronchitis. No one had ever tried to raise ostriches above the Arctic Circle before.

But ostriches have inhabited the planet for 70 million years and have lived through more than one ice age. Artyom’s trial birds quickly silenced the many skeptics. A few days after they arrived, the temperature dropped to -22 degrees Fahrenheit, and the farm in Molochny was invaded by people curious to see these miraculous birds with their own eyes. They saw an idyllic picture: ostriches building nests in snow drifts and spending their nights right on the snow.

At first, Artyom and his wife planned to turn their farm into a tourist attraction. Their scheme could not have been simpler: to supply fat-free poultry to restaurants in Murmansk and local gourmets. Nature has yet to invent anything more nutritional. The first bird was butchered a year later, and the poultry went to market.

For farmers, ostriches are profitable birds because almost every part of them can be put to use. Ostrich skin is valued by makers of ladies’ handbags, ostrich feathers are ideal for chic hats and boas, and even the ostrich’s cornea can be transplanted to a human eye. Ostrich flesh is low-calorie, while the fat is now being actively used in cosmetology. Ostrich eggs, too, are in great demand.

The birds are not slaughtered on a large-scale and are only butchered once a year. The rest of the time, hundreds of ostriches make themselves at home in enclosures, nibble at the scant grasses and dandelions, tear off the tops of the stinging nettles that poke through the fence and fatten up eating mixed fodders. Meanwhile, tourists come from around the world to admire the frost-resistant birds. Only recently the Andronakis had guests from Argentina and Australia.

The mystery of Putin and Medvedev

The first ostriches to be born above the Arctic Circle appeared in 2008. Two chicks hatched out of their shells the day President Dmitri Medvedev was inaugurated.

“We didn’t spend long searching for names. We named one Putin and the other Medvedev,” says Artyom, then pausing for effect. “The thing is… you can determine the sex of an ostrich only after six months, when it acquires its characteristic plumage. The males turn black, the females remain gray. Well, one of the first two chicks turned out to be a girl! But I won’t tell you which one is which – better to stay out of trouble…”

A ten-day old chick by the politically correct name of Vasya runs around in a covered enclosure under lamps. Vasya looks to be a future sprinter, deftly avoiding the hands that want to scoop him up. For now, Vasya is acting out of instinct, but in a few weeks he will lose his fearfulness – he will understand what genuine nerve is and start believing in people.

Some time ago, the Andronakis began holding real ostrich races on their farm. Artyom learned how to ride an ostrich the old-fashioned way: through trial and error. He wound up with many bruises and bumps, but today he knows how to ride an ostrich. It does not call for any special equipment. Artyom jumps onto the back of a proven mount to demonstrate.

"We named one Putin and the other Medvedev,” says Artyom, an ostrich keeper. Source: ITAR-TASS

Before saddling an ostrich, however, the bird must be caught. And to catch an ostrich requires a fair amount of running around. Once an ostrich has been caught, it must be tamed. The system of taming is not complicated; it was invented on that famous night in 2007: a sock pulled over the bird’s head. The ostrich cannot see anything; and since itcannot, it is not afraid. The main thing is to sit closer to its neck, tuck your legs under the wings and hold on tight. The exhausted bird, having already run around the enclosure for 15 or 20 minutes, will plump down on the ground all by itself, ready to be straddled.

This fall’s first chick, Vasya, has racing in his future. A year from now he will be saddled for gallops across the Murmansk snow, as if it were African grass.

First published in Russian in strana.ru.