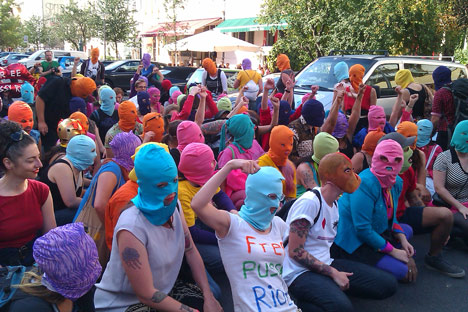 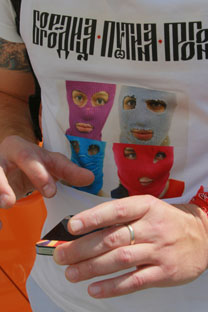 Disputes over the Pussy Riot brand name have taken a new turn after the state brand registration agency, Rospatent, refused to endorse the ownership rights, stirring fears of further provocations.

Some videos with women wearing nothing but balaclavas, the band’s hallmark, have already been found and blocked, according to Feigin.

He said he expected more attempts to denounce the band, which has no legal instruments to defend itself from detractors.

The agency claimed the name had an indecent translation into Russian, according to the official reply the lawyer posted to his twitter feed.

“I saw that Pussy Cat has been registered as a brand, but how can we prove that in this case ‘pussy’ means something else,” he said.

‘This is not business, but politics’

The Kinokompania Veb-Bio company is owned by Natalia Kharitonova, Feigin’s wife, and has acted on behalf of the three women who got sentenced for taking part in the band’s most famous “punk prayer” to “expel Putin from Russia.”

Feigin dismissed earlier reports on commercial gains made by the use of the brand, published by the influential Kommersant business daily.

“This is not business, but politics,” he said. “This is another level of protection for us.”

He said his colleagues representing Pussy Riot are to consider applying to a higher registering agency as prescribed by rules, but there was little hope for success.

Earlier, it was reported that Yekatrina Samutsevich, the band member whose jail term was replaced with a suspended sentence, disputed the brand ownership rights with Feigin.