Moscow 'too slow' for Syrian opposition 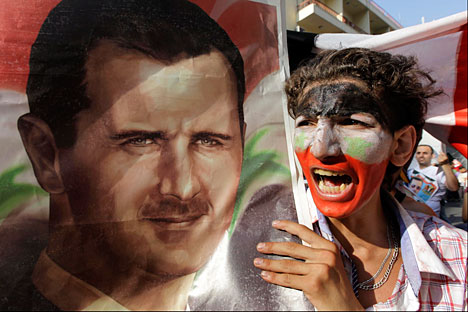 Will Russia’s policy of backing Bashar al-Asaad in Syria backfire? The new opposition coalition continues to reject Moscow’s call for negotiations with the Asaad regime.

Russia is sounding out backdoor approaches to the unified Syrian opposition, but is too slow to change its official policy on Syria and admit the serious possibility of President Bashar al-Assad’s ouster, Russian pundits said.

“We believe this [Assad’s removal] will be our moral and military-strategic defeat,” said Vladimir Akhmedov, a Syria expert at the Institute of Oriental Studies at the Russian Academy of Sciences. “And it’s hard to swiftly execute a paradigm shift.”

The Syrian opposition last Sunday established a new broad coalition that hopes to gain worldwide recognition, something previously lacked by the disjointed groups opposing Assad in the bloody 20-month-long conflict.

The National Coalition for Syrian Revolutionary and Opposition Forces is already recognised by most members of the Arab League and supported by NATO members Britain, Turkey and the United States. France became the first Western country to recognise the group as the only partner for dialogue in Syria.

Russia’s reaction was limited to calls for negotiations between the opposition and the Assad regime – a strategy that the new coalition explicitly rejected in its founding documents.

“It’s disappointing that there is still no opposition [in Syria] willing to sit down at the negotiating table,” Leonid Kalashnikov, first deputy chairman of the Russian State Duma’s Foreign Relations Committee, told RIA Novosti on Tuesday.

He called negotiations the only way of ending the conflict, which has already resulted in 30,000 fatalities as of last month, by UN estimates, and has been recognised as a civil war by Amnesty International.

The new coalition has different priorities. The alliance wants to create a unified military command for all anti-Assad insurgency groups and an interim government to oversee the country after his ouster, prominent opposition member Mahmoud Al-Hamza said earlier this week.

Missiles in the No-Fly Zone

Foreign powers may become directly involved in the conflict by helping establish a no-fly zone over northern Syria, where the opposition’s military command and the interim government plan to locate their HQ, in order to exert effective control over the situation on the ground.

NATO countries established a no-fly zone in Libya during last year’s revolution in the country, and their help proved pivotal for the rebels’ victory. Russia had the opportunity to block the operation in the UN Security Council, but chose not to use its veto.

A no-fly zone plan for Syria would leave Moscow facing a dilemma: either abandon Assad outright, or explicitly side with him, said Akhmedov from the Institute of Oriental Studies.

The Syrian branch of the Muslim Brotherhood, which is part of the insurgency, this week said that Russia was “in talks” about supplying Damascus with S-300 interceptor missiles, which would pose a serious obstacle to NATO plans for a no-fly zone.

This report could not be independently verified. It could have been intended to put pressure on Russia’s leadership, Akhmedov said.

All They Need Is Fighter Jets

Syria’s civil war has been at an impasse for months; with neither side able to get the upper hand after several large-scale battles for major cities.

But the new coalition could tip the scales, experts suggested.

The rebels claim to control 60 to 70 percent of Syria’s territory, but most of this is sparsely-populated countryside. They lack the heavy weaponry available to Assad’s regular army, which is increasingly relying on indiscriminate aerial bombardments of areas held by rebels, inevitably resulting in heavy civilian casualties.

The new rebel alliance is hoping to get its own heavy weapons thanks to its supporters, the Western and Arab countries that oppose Assad.

Western countries have been reluctant to supply military equipment to the disjointed opposition lest it fall into the hands of Islamic extremists, but a unified military command created by the coalition would, in theory, be in a better position to prevent that.

“Give us aviation, and we’ll sort out the rest ourselves,” Al-Hamza, a senior member of the Syrian National Council, an opposition group that joined the new coalition, said at a recent press conference in Moscow.

Although Russia has been viewed as backing Assad throughout the conflict – the country vetoed three anti-Damascus resolutions in the UN Security Council – it has contacts among the Syrian opposition.

Moscow and Damascus were allies for decades, and many Syrian politicians, such as Moscow-based Al-Hamza or Kadri Jamil, a former opposition leader who is now Assad’s Deputy Prime Minister, have studied, worked or lived here.

Russia is putting some effort into building connections with the Syrian opposition, both officially and unofficially, analysts said.

However, Russia’s best contacts are in the Syrian army and law enforcement agencies, which are the backbone of Assad’s regime, Akhmedov said.

Purging the leadership of Syrian security forces is one of the key demands of the new oppositional coalition.

“We’ve no means of influencing the opposition,” lawmaker Kalashnikov conceded. “We’ve always said [to the Western countries], we just get Assad to negotiate and you get the opposition to do the same.”

“Russia could always, by letting Assad leave, get the Arab world on side, in its camp,” Marzouki said in a recent exclusive interview to RIA Novosti.

But the problem is Moscow’s inability to update its official policy on Syria due to the sheer inertia of its bureaucratic apparatus, experts explained.

“We ourselves don’t know what we’ll be doing,” Malashenko said.