Petraeus winds up the Afghan war 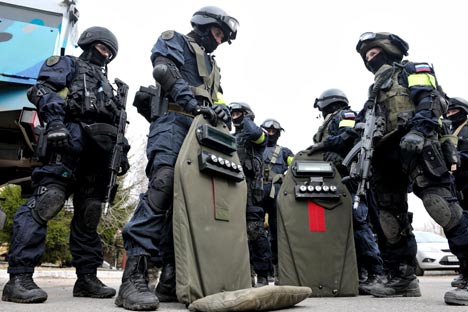 President Barack Obama is nearing the deadline for taking some big decisions on what to do with the Afghan war. Source: ITAR-TASS

The Petraeus scandal holds many dark secrets and we do not know what they portend for the US president.

A nadir has been reached when a war takes the funny turn. Like when Napoleon overslept – only to wake up in St. Helena. Generals who have sex under the table on the battlefield do not acquit themselves well – especially when young men and women they lead are dying outside their cabin. Morale begins to sap.

The David Petraeus scandal – American wisecracks are yet to come with a catching title – is unfolding with fateful rhythm. A thin line holds him back from court martial. Did he or didn’t he indulge in adultery while in the US Army? That’s the issue.

The debris has fallen on his successor, too, who is still commanding troops in Afghanistan – American as well as allied troops. Gen John Allen’s brilliant career also is in limbo with doubts appearing on his next appointment as the Supreme Commander of the North Atlantic Treaty Organization [NATO] forces.

But the focus is going to be on the Afghan war. President Barack Obama is nearing the deadline for taking some big decisions on what to do with this war that he inherited from his illustrious predecessor in the Oval Office. The good thing is that all along Obama instinctively wanted to get rid of this war but was stuck with it due to shenanigans of the Pentagon boys, especially Petraeus, who was the darling of the Republicans, especially the neo-conservative morons.

Now, Obama has the perfect occasion. Will he seize it? But then, his predicament is comparable to Prometheus Unbound. He can, arguably, take matters into his hands. But on the other hand, he also faces the ultimate cruel fate of Prometheus – being led into shackles by the pitiless Republicans in the US Congress as dusk falls and the eagles descend to sup on his bleeding heart no sooner than it regenerated. And Obama is a smart politician.

The point is, the Petraeus scandal holds many dark secrets and we do not know what they portend for the US president. Like Shakespeare wrote, how ephemeral is the fate of a politician. Mice and men are alike in their destiny, ultimately. Obama just won a magnificent election victory against heavy odds. The first question is going to be how early he knew about Petraeus’ escapades. Two, if he indeed knew as far back as the summer, as the Republicans allege, he needs to explain why he let the autumn leaves fall and then the snow and frost to arrive in the valleys before taking the lid off the can of worms.

Then, there are the sideshows endemic to all political scandals. First, Petraeus knows precisely what happened in Benghazi when the US ambassador to Libya Christopher Stevens was murdered. The really explosive question is whether the CIA was illegally holding prisoners from the world of militant Islam in secret cells in Benghazi. If there were, who sanctioned those CIA camps?

The buck stops at the Oval Office. The US Congress may want to know – unless the Republicans can be persuaded out of the subject.

But the political fortunes of Susan Rice, US ambassador to the UN, hangs by a thin thread. She was apparently more loyal to Obama than he himself was, while pooh-poohing the glaring reality that the death of Stevens was actually a tragic blowback of the US’ lethal dalliance with al-Qaeda elements in the desperate hurry in Washington to overthrow the regime of Muammar Gaddafi.

Will Rice make it as Hillary Clinton’s successor at Faggy Bottom – that’s the residual question. All of Obama’s presidential prerogatives may not be good enough to pitchfork her onto a higher trajectory of public life if Petraeus blows the whistle. And, for argument’s sake, even if Obama succeeds in getting Rice on board as the cabinet minister, she will be a wounded bird to soar high into the firmament of international diplomacy.

Suffice to say, Afghanistan is becoming the burial ground of the reputation of yet another imperial power. The Afghan war is dramatically changing course. It is going to be very difficult henceforth to inject an air of seriousness into this war, which was always futile in the way in which it was fought for ten long bloody years.

Indeed, a long checklist needs to be prepared urgently. The regional capitals like Moscow, Tehran, Islamabad and New Delhi need to sit up and take note. Obama has lost the moral ground to pillory Hamid Karzai for his failings anymore. That’s by itself not a bad thing to happen.

Obama will be hard-pressed to demand that the young men and women from North America and Europe should continue to die in the Hindu Kush in the US’ supreme national interests. The establishment of US military bases in Afghanistan becomes even harder to justify. The post-2014 security scenario looks very dangerous.

The world community and the region surrounding Afghanistan – and the Afghan people – will be watching in bewilderment as the full story of Petraeus’ rise and fall begins to emerge. It was one thing when American soldiers urinated on the Koran or got themselves photographed with mutilated Afghan corpses, or, when tough sergeants sneaked out of camps in the dead of the night to slaughter the innocents abroad.

But it an entirely different matter when the US commanders are caught ducking under the table while a war rages outside their cabin and soldiers are falling. Just consider this: What will the Afghans think of the US commanders? How can the US inspire awe in the minds of the Taliban who must be laughing their guts out upon hearing the tidings from Washington? To be sure, the Afghan war isn’t going to be the same again. This is just the moment to mothball it and cast it into the dustbin.