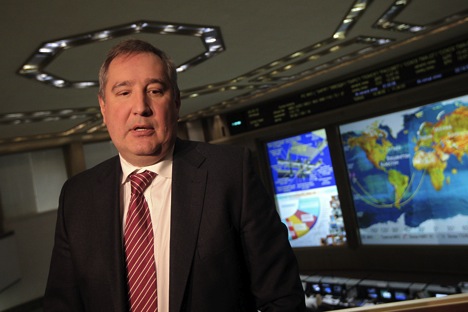 According to Mr Rogozin, “the Vostochny Cosmodrome will play a role in creating an equilibrium of population density in Russia.” Source: RIA Novosti

Vladimir Popovkin, the head of the Roscosmos space agency, announced a root-and-branch restructuring of the organisation's operational management, ground-breaking work in developing new technologies, and the modernisation of its ground operations.

After his visit in early November to the far-Eastern Amur Region, where the construction of Russia's new Vostochny (“Eastern”) Cosmodrome is in progress, Vladimir Popovkin – the head of the Roscosmos space agency – announced a root-and-branch restructuring of the organisation's operational management, ground-breaking work in developing new technologies, and the modernisation of its ground operations. However, the feasibility of building works on such an enormous scale remains an open question.

“I am delighted with the pace of construction. If we can keep going at this rate, then we can expect the first launch of space craft from here in 2015” was the assessment of the Roscosmos chief of the building work.

“Construction of facilities at Vostochny is now going on around-the-clock, involving two-and-a-half million workers and more than 600 pieces of equipment. Budgetary injection is planned at the level of 20 billion roubles this year (€500m), and 10 billion roubles higher in 2013.”

The principle objective in building the Vostochny base was outlined by President Vladimir Putin in a speech during his visit to the Russian cosmodrome. “Our goal is for Russia to get a national space centre that meets the most demanding international standards and requirements.”

“It follows that the strategic objective is ensuring the self-sufficiency of space activities over the entire range of applications – from socio-economic and scientific launches through to manned space flight. It's initially planned to lessen operations at the Baikonur cosmodrome, without replacing it entirely – at least, not until the expiry of the lease agreement with Kazakhstan.”

From the technical side of things, the bosses at Roscosmos believe the Vostochny base offers significant advantages: the initial launch trajectory would not pass over heavily populated areas, or over the territory of foreign countries; the zones in which the detachable thrust sections of the booster rockets would fall lie in international waters, or areas of low population density in Russia; and the cosmodrome's location has excellent access to existing road, rail and airport infrastructure.

However, when considering the economic side of the equation, the new space centre will be twice as expensive as Baikonur. According to Director of the Spetstroy Federal Construction Agency Grigory Naginsky - the agency entrusted with legal responsibility for the building work - the cost of building the Vostochny Cosmodrome is approaching 300 billion roubles, which approaches the outlay involved in the Russian Winter Olympics in Sochi or the APEC Summit.

Meanwhile Russia and Kazakhstan have been in long agreement over Russia's lease of the Baikonur space centre until 2050. Russia makes an annual payment to its neighbouring country of $115m dollars (3.7 billion roubles) – a lease payment which is fixed for the entire duration of the lease. This means that the cost of leasing Baikonur for the remaining 38 years of the lease agreement will total 140 billion roubles. The economic savings made could easily have been invested in the development of new space technology.

It's worth mentioning the geographic issues. Initially experts were tending towards the Primorsky Region port of Nakhodka, one of Russia's most southerly-lying points, positioned three degrees South of Baikonur. On top of this, Nakhodka is a sea port – making sea transportation available for unwieldy spacecraft, and offering extensive economic savings over having the spacecraft delivered by air from the factories which build them. They calculated exactly this level of saving in Beijing, when they completed their fourth-built space centre, at the coastal location of Wenchang.

Neverthless, the site in the Amur Region won the tender. The launch-pad will be nine degrees North of the Nakhodka location, and six degrees North of Baikonur. Such a location will result in reduced payload weights for space launches.

The political background played a significant role in the decision between the different regional options on the table. Launches from Nakhodka stood a chance of crossing through Japanese airspace. If a malfunction were to occur in the initial launch phase, fragments of the craft – possibly highly toxic – could fall within the territory of a neighbouring country. Safety reasons ruled out a third possible location for the space centre site – in the vicinity of Sovietskaya Gavan in the Khabarovsk Region. This location would have been even closer to Japan.

Overall the choice of Vostochny reflects the relentless rise in costs of transporting space hardware. The main space industry producers in Russia are located in Moscow, Samara, and Zheleznogorsk (Krasnoyarsk Region, Siberia). Space vehicles, rocket launch vehicles and staff have to be transported from there to Baikonur by air, or by rail transport, over a distance of between 1500 and 2500 kilometres. When the new facility at Vostochny opens, that distance will increase to 5500 kilometres.

The range of local temperatures impact upon the costs of the construction work – from +35C down to -40C (from 95F through -40F). Consider just the costs of building the foundations in the frozen soil?

The take-off trajectories are such that should a malfunction occur, the escape capsule is most likely to touch down in the sea. Getting to it would be difficult, and added to this, Russia has traditionally worked with land-based rescue systems.

Despite all this, the Vostochny Cosmodrome is now objective Russian reality. It could be that Vice-Premier Dmitry Rogozin was right when he spoke in April about the macro-economic significance of the new space centre. According to Mr Rogozin, “the Vostochny Cosmodrome will play a role in creating an equilibrium of population density in Russia.”  Whilst saying this, Mr Rogozin commented that the Russian Far East borders some of the world's most heavily-populated nations.