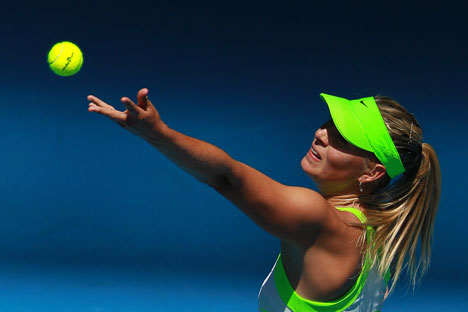 With 10 players ranked inside the top 100, and about 40 inside the top 500, Russian women have a major presence in the WTA rankings. Source: RIA Novosti

Russian tennis will be hoping for plenty of improvement next year, starting in Melbourne, as it reflects on a 2012 of very mixed fortunes.

Russian tennis fans will soon be focussing on Australia, home to the first grand slam tournament of 2013, in the hope of seeing resurgent Russian performances after a disappointing 2012.

The Russian Tennis Federation has endured a difficult year, one with significantly more downfalls than triumphs. Russian women players produced acceptable performances, but their male counterparts struggled and will have much to prove when the Australian Open begins on January 14.

The Russian men's team, which is suffering its biggest crisis in 20 years, is hoping the tournament will mark its comeback. The Russian men recorded their latest loss at the hands of Brazil in the Davis Cup. Following the 5-0 defeat, they were relegated to the zone group. Captain Shamil Tarpishchev's team comprised Alex Bogomolov Jr., Igor Andreev, Teimuraz Gabashvili and Stanislav Vovk - all good players but none appearing destined to be stars of the game.

The Russian team has only four players among the top 100 in world rankings, and only two in the top 50. Russia's best hopes in Melbourne are Nikolai Davydenko, a player nearing the end of his career, and Mikhail Youzhny, viewed as being one of Russia's purest tennis talents who has never become a champion. Davydenko, once the third-best player in the world, won the Tennis Masters twice and collected 21 ATP titles. But he now lacks the power and consistency to keep up with the likes of Roger Federer and Rafael Nadal. The same goes for Youzhny, whose recent victory at the Zagreb Indoor tournament and a semi-final appearance at the St Petersburg Open will have little relevance in the heat of Melbourne.

Aside from Davydenko and Youzhny, Russian men’s tennis has no other real prospects. The ATP seeding system suggests Bogomolov, Dmitry Tursunov, another unrealised talent, and Andrei Kuznetsov may be players of the future, but they will have to prove their seedings on the court.

One of the reasons for the critical state of the Russian men's team is its lack of funding. The federation has insufficient resources to invest in young players and, as a result, many go abroad. For example, Russians Andrei Golubev, Mikhail Kukushkin and Yury Schukin have played for Kazakhstan in recent years and, while they are not giants of the game, they have produced consistently good performances.

“It can cost up to $2000 per year for an under-16 player. Tennis is the only sport in which players have to pay out of their own pockets to play,” Shamil Tarpishchev, Russia's Davis and Federation Cup captain, said.

It will be up to the Russian women to uphold the country's honour in Australia. With 10 players ranked inside the top 100, and about 40 inside the top 500, Russian women have a major presence in the WTA rankings. But numbers do not always reflect quality. With the exception of Maria Sharapova, Russian women performed disappointingly at the grand slam tournaments this year. Sharapova remains Russia's brightest hope at The Open, although there is always the chance she will come up against her long-time rival Serena Williams, who defeated her at Wimbledon and at the London Olympic Games. At 25, Sharapova is in her tennis prime. She played in two grand slam finals this year, winning at Roland Garros, and she reached the semi-finals of the US Open. Winning the Australian Open could be the beginning of a new chapter in the story of Sharapova’s tennis career, a victory that would underline her maturity as a player.

Another player to watch is Maria Kirilenko. Although better known as the girlfriend of Russian ice-hockey superstar Alexander Ovechkin, Kirilenko enjoyed a fine season this year. She narrowly missed out on a bronze medal at the London Olympics; she lost to Sharapova in straight sets in the semi-final, and then to Belorussian Viktoria Azarenka in the bronze-medal match. Nadia Petrova is another Russian hopeful at the Australian Open. She is ranked inside the top 20, but if past performance is an indication, she is unlikely to reach the final stages of the tournament. While two other well-known players, Vera Zvonareva and Svetlana Kuznetsova, are suffering from injuries, there is depth in the women's contingent. This may be the year for Anastasia Pavlyuchenkova. At 21, she is talented and powerful, was ranked 13 in 2011, but fell to 35 after a disappointing 2012.

Meanwhile, the Australian Open has given itself a boost to make it as attractive a destination as the French Open, Wimbledon and the US Open by increasing its prize money by 15 per cent to a record $31 million, making it the richest tennis tournament in the world. The $4 million increase in prize money is the biggest single increase in the history of the event.

Every player will receive more money, including those who exit in the first few rounds. The decision to increase prize money was taken to discourage players unhappy about their share of revenues from boycotting the tournament.

The tournament organisers have also introduced new practice facilities for players, including eight new clay courts, and they have expanded the use of the cutting-edge Hawk-Eye technology, used to check line calls, to show courts two and three.