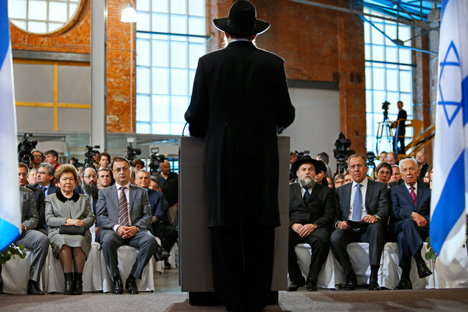 In the thematic galleries, viewers can sit in a 19th-century Odessa cafe and leaf through newspapers, or view the Moscow apartment of a Jewish family in the 1970s.

With a 4D theatre, video projections and countless iPads, Moscow’s new Jewish Museum and Tolerance Centre turns the turbulent history of Russian Jews into a multimedia extravaganza. But underlying the museum’s flash-bang approach is a serious desire to establish the Jewish people as a vital part of Russia’s past and future.

“It was very important for us to create a museum not about how things used to be, not a museum of a destroyed, forgotten people, but about how Jews lived, live and hopefully will continue to live,” said Boruch Gorin, head of the public relations department at the Federation of Jewish Communities of Russia, as he led reporters past a virtual recreation of 19th-century Jews gathering for a meal.

The museum is located in the 8,500-square-metre space formerly occupied by the Garage Centre for Contemporary Culture. According to organisers, it is the largest Jewish history museum in Europe. Israeli president Shimon Peres attended a special opening of the museum and a luncheon in its honour hosted by President Vladimir Putin. Putin has offered public support for the museum, donating a month’s salary for its construction.

Jewish Museum and Center of Tolerance was opened in Moscow. Source: Emmanuel Grynszpan

The museum begins with a film that broadly recounts the history of the Jewish people from the ancient world through the present day, complete with spray mist, 3D projections and moving seats. Visitors then progress to the centre hall, which is filled with multimedia exhibits about everyday life in the shtetls (Yiddish word for town) of the 19th century; with the click of a button, they hear a voice reading the Torah, or the clack of hooves on cobblestone streets.

In one virtual display, they can even try on the garb of a contemporary rabbi, blacksmith or merchant.

“It’s attracting people to Jewish history who are very distant from it, who’ve never been to a synagogue or other Jewish centres,” Alexander Boroda, head of the Federation of Jewish Communities of Russia, told The Moscow News. “Hopefully they can learn something through this style of presentation.”

The project was headed by American architect Ralph Appelbaum, who also developed the U.S. Holocaust Memorial Museum in Washington. “We wanted to make sure that we had a scholarly trail that was chronological and deeply researched, supported by thematic galleries that would connect the museum together,” Appelbaum told The Moscow News as he tapped on a screen with biographies of Soviet Jews.

Related: Take a virtual trip to the museum

The chronological overview encircles the main hall, beginning with Jews’ incorporation into the Russian Empire under Catherine the Great and continuing through the emigrations of the late Soviet era and the present day. Custom-made maps illustrate Jewish population shifts across Russian territory.

In the thematic galleries, viewers can sit in a 19th-century Odessa cafe and leaf through newspapers, or view the Moscow apartment of a Jewish family in the 1970s. Woven throughout the displays are 13 hours of oral history interviews with Jews from Russia and abroad.

The fulcrum of the museum is a panoramic display about World War II, which combines archival footage, interviews with survivors and historical artefacts such as letters and medals. While it includes information about the wartime massacre of Jews within the Soviet Union, including several harrowing photographs, its primary emphasis is on how Jews contributed to fighting “The Great Patriotic War.”

There are sombre moments, such as a Memorial Gallery where visitors can light a candle in memory of the war dead. But the museum’s focus is on reconciliation rather than mourning.

“The idea is to let people who are not Jewish realise that modern Russia is devoted to becoming a pluralistic society, where you can have a lot of personal freedom, pray the way you want and be the way you want,” Appelbaum said. To this end, the museum concludes with the “Tolerance Centre,” in which visitors watch short films about various kinds of discrimination on iPads and then respond to discussion questions.

In addition to the permanent exhibition, organizers say the museum will host three to four temporary shows per year about different aspects of Jewish history. “You can’t say that the entire 2,000-year history of the Jews is one big drama,” Boroda said. “There were good times, and there were bad times.”