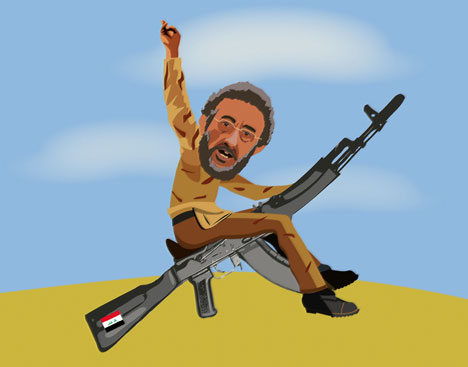 A genuine detective story is unfolding around deliveries of Russian arms to Iraq.

On the afternoon of Nov. 10, the Iraqi prime minister’s official representative announced that his boss had decided to cancel a substantial deal for the delivery of arms and military hardware to Baghdad. The deal had been signed in October, during a visit to Moscow by the Iraqi government of Nuri al-Maliki.

According to the government official, after Maliki returned from his trip to Russia, he began to suspect possible corruption in the contract, which was the reason stated for the deal’s cancelation.

Then, on the evening of Nov. 10, according to the Arabic TV station Al-Jazeera, Iraq’s acting Defense Minister, Sadoon al-Dulaimi, announced at a press conference in Baghdad that the deal would go ahead.

Clarity with respect to this proposed delivery of Russian arms worth $4.2 billion will no doubt appear in the coming days. Still, one can analyze the reasons for the emergence of this non-standard situation even now.

According to the information in press reports, after Nuri al-Maliki’s meetings in Moscow, the sides agreed on deliveries of 30 Mi-28 attack helicopters and 42 Pantsir Zenit missile-launch systems to Iraq. This deal would have made Russia the second largest military supplier (after the United States) to Iraq, which spent a total of over $30 billion on purchases of weapons in the Soviet Union under a previous regime.

The results of the October negotiations were perceived as almost sensational. At a time when Moscow’s relations with Arab countries were becoming more difficult because of Syria, Iraq, which has maintained a guarded position because of its proximity to Iran, is a convenient opportunity for proving Russia’s ability to preserve a presence in the region.

Moreover, a tilt toward Moscow on the part of Baghdad would be one more vexing confirmation of the failure of U.S. foreign policy in Iraq.

The news out of Moscow a month ago left American journalists scratching their heads and asking the U.S. State Department spokeswoman, Victoria Nuland, what the U.S. had been fighting for if the Iraqis could turn around and do business with a dangerous competitor. Nuland feigned indifference and, of course, had nothing to say: to pull a sovereign state aside and forbid it to have dealings with another equally sovereign state would provoke a major scandal.

However, judging from current reports out of Baghdad, the United States cares very much about with whom the Iraqi leadership deals. One does not need to possess inside information to suppose that strong pressure was brought to bear on the willful Maliki and that he was told who should be Iraq’s most important fiend.

Seven years of occupation have shown that America will not be able to retain Baghdad under its protectorate, although one must give U.S. strategists credit: they extinguished a catastrophic flare-up of violence in Iraq in the middle of the last decade and created the conditions for a new political construction. The elections in Iraq, in spite of all the difficulties, were perfectly democratic; that is, their results reflect the arrangement of forces and preferences in that country. They also showed that, given a free choice, people in the Middle East will not vote for those candidates considered optimal by Washington.

Iraq’s Shiite majority, which was suppressed under Saddam Hussein, has begun to look toward fellow Shiites from Iran. This is not to say, of course, that those officials now in power in Baghdad are Iranian puppets; but Maliki and his comrades listen very carefully to the voices in Tehran and Qom.

The Syrian conflict crystallized Iraq’s special position among Arab nations. It is not by chance that Russian President Vladimir Putin declared after talks with Nuri al-Maliki that Russia’s and Iraq’s views concerning the Syrian crisis nearly coincide.

Iraq’s need for closer relations with Russia is a function of precisely this intermediate position among the various regional camps. The United States, which expects loyalty from Baghdad, views its agenda with growing displeasure.

The leading Arab states, which have united against Syrian President Bashar Assad, are beginning to see Maliki as a new edition of a pro-Iranian “fifth column.”

At the same time, a definitive drift toward Iran on the part of Baghdad would be fraught with major problems. In the first place, a loss of independence is hardly pleasant, even for the sake of a close partner. In the second place, Shiites do not make up an absolute majority in Iraq, and the government must consider the opinions of other segments of the population in order to preserve stability.

Under these conditions, the appeal to Russia is an ideal solution. Moscow does not have clear political ambitions with respect to Iraq. No one in the Russian capital would like to see a return to the model that existed under Saddam Hussein. Russia is interested in broadening its markets (especially since the changes in Libya and Syria have diminished its opportunities) and, in exchange, it is ready to offer political support.

The “Arab Spring” showed that Russia is not a key player in the Middle East; but it also made clear that, without the participation and support of the Kremlin, it will not be possible to seriously influence the course of events in the region.  And, in a situation where you need an equalizer – someone who cannot change the whole game, but who can promote this or that scenario – Russia is a highly suitable variant.

Here, however, matters are complicated by major foreign interests. The United States cannot again allow itself to lose Iraq, which is regaining it leading positions in world oil production. This would be unacceptable politically and a loss economically, since the future of other oil-producing nations in the region is now far less clear than it was a couple of years ago.

Washington is using all means to convince Baghdad that only America can play the role of key partner.

It looks as though Iraq and its future lot are becoming entangled in a new knot of contradictions that had seemed severed, once and for all, by the American invasion in 2003. And Russia is again becoming a participant in the big game.