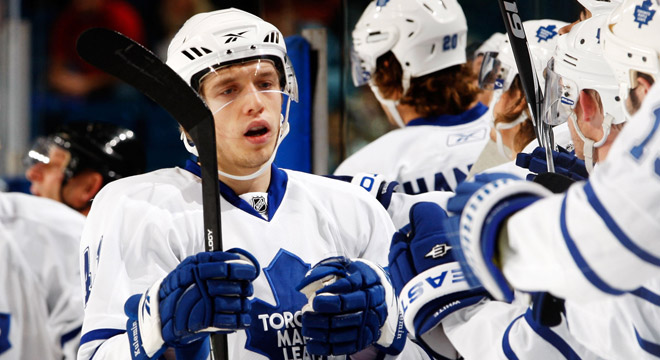 Road to the NHL: From Magnitogorsk to Toronto

Kulemin represents the Magnitogorsk school of hockey. For a long time, he did not stand out from the rest of the team; he was average. But, when the time came to be promoted to the adult team, Kulemin raised his game. His powerful throws and sharp view of the arena attracted the attention of Metallurg, the city’s top team. The debut season was extremely successful for Kulemin. Scoring 13 points (5+8) in 30 games, Nikolai caught the eye of leading NHL clubs.

This strapping player from the Urals was drafted at age 20 — two years later than usual. This was a result both of Kulemin’s status as a relative unknown and of rapidly deteriorating relations between the NHL and the Russian Superleague. It was only in 2006, during the junior world championship, that Kulemin raised his stock with rough and decisive play (4 goals and 25 penalty minutes in 4 matches).

He was the fifth Russian to be selected in the 2006 NHL Entry Draft — after Semyon Varlamov, Ivan Vishnevsky, Igor Makarov and Yuri Aleksandrov. The last three have yet to play in the NHL. Kulemin became a leader on the Metallurg team in the  2006/07 season, following Evgeni Malkin’s desertion to go overseas. Kulemin scored 27 goals and made 12 assists.

His team won gold medals and Kulemin earned some good press and an invitation to play for the Russian national team. Fyodor Konoreikin, Metallurg’s head coach, predicted a great future for him. “Nikolai is the most talented Russian hockey player. Look how confident he is on the ice, in spite of his age. He is a born leader, I am sure he will make an excellent career with the NHL.”

At the end of the season, Kulemin signed on with Toronto, but this did not lead to a new tug-of-war over him between the NHL and Russia: the Maple Leafs agreed with Metallurg that Nikolai could play one more season in the Superleague.

By the end of his first season in the NHL, Kulemin was the “Soviet link” in a line with Ukrainian Alexei Ponikarovsky and Belarus Mikhail Grabovski.

Ponikarovsky, an NHL veteran, befriended the rookie and helped him adapt to life in North America.

Being a strong fighter

In terms of mentality and manner of play, Kulemin is more of a laborer than a superstar. He’s not afraid to fight for the puck, to get into a power struggle with contact on the sidelines. At the same time, he stands out for his well-balanced skating and very good speed. He’s a strong fighter and not averse to going back to defense.

All these “North American” qualities are what drew Toronto’s coaches to Kulemin. Now wrapping up his fourth season with the blue-and-whites, Kulemin is the most important old-timer on the team: he has more matches for Toronto to his credit than any other of the club’s current members. During the 2010/11 season he scored 30 goals, but this year that number dropped drastically to only seven goals. Nikolai’s season ended prematurely — with a broken finger in March 2012.

“The puck just wouldn’t go into the goal”, the phrase Kulemin uttered back in November was an accurate description of his play throughout the regular season. Kulemin was still playing with Grabovsky and MacArthur, but unlike them, he did not come into his own. Toronto’s number 41 scored only a quarter as many goals and won half as many points as in his previous season, and had a run of 23 goalless matches. In the summer, Kulemin will be a partly free agent. There is no question of a higher salary; he will be lucky if he stays in the NHL.

“Here people are never in a rush, everyone smiles. Fans recognize you on the street, wish you success, there’s no negativity. The team hasn’t won the Stanley Cup in 40 years, but the stadium is always full.”

Keeps stuffed rabbit in his locker

During the 2010/11 season, Kulemin kept a stuffed rabbit in his dressing room locker — a talisman given to him and Grabovski by their agent on the eve of 2011, the year of the rabbit. The stuffed animal was lost at the end of the season, and the next season Kulemin’s results were dramatically worse.

He is married and has two children. His son Alexei began skating at the age of two.