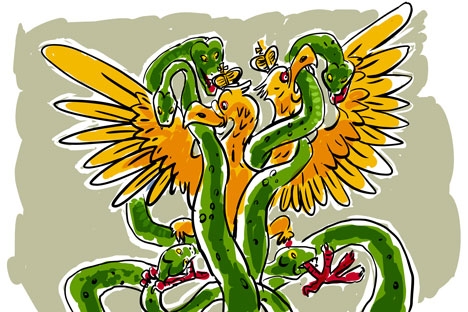 The Kremlin is looking to capture the corruption card for itself, presenting itself as the force able and willing to clean up the country.

That corruption is a serious challenge for Russia has long been acknowledged, not least by President Vladimir Putin and Prime Minister Dmitry Medvedev. There has been a regular trickle of arrests and dismissals connected with abuse of office, but generally of smaller fry or of those connected with wider political struggles. On the whole, it has been hard to see any will to seriously address the problem. If anything, there seemed to be a culture of impunity: those with power enriched themselves as a matter of course.

Suddenly, that seems to have changed. Defense Minister Anatoly Serdyukov was dismissed following allegations that the ministry’s Oboronservis Corporation sold off $95 million of property at below-market prices. Former Deputy Regional Development Minister Roman Panov has been arrested after claims that $470 million was embezzled as facilities were built for September’s APEC Summit in Vladivostok. New investigations are being opened within the Health and Social Development Ministry and the Glonass satellite navigation system.

Why the apparent change of heart? First of all, there is ample evidence that the government has truly come to appreciate the costs and risks in allowing corruption to fester. For example, the government’s ability to continue to spend on military armament is under pressure given the need to allocate money to developing everything from education to pensions.

A step towards squaring this circle would be to address the way that, according to Chief Military Prosecutor Sergei Fridinsky, some 20 percent of the State Armament Order is misappropriated. Likewise, as it becomes clearer how far high-profile projects from the 2014 Sochi Winter Olympics to the APEC Summit in Vladivostok have been beset with embezzlement then not only does it drain the treasury, it also deters foreign investors.

There is a further impact on Russia’s standing in the world. The irony that the APEC Summit released a declaration on fighting corruption from a building whose construction was the opportunity for fraud is hardly a comfortable one for Moscow.

There is also a domestic political dimension. While attitudes range from resignation to outrage, the public is aware of and dismayed by the persistence of corruption. As a result, it has become one of the relatively few rallying cries able to unite the disparate opposition.

It also provides an issue that middle class, metropolitan radicals might be able to use to stir up and mobilize support among the masses. Aware of the danger, the Kremlin is looking to capture the corruption card for itself, presenting itself as the force able and willing to clean up the country.

To lighten the burden of corruption on people’s day-to-day lives, it is largely bribe-takers at the bottom or middle ranks of the apparatus who must be targeted. However, to have a political impact, more exalted heads must roll. This is not just a stunt, it also allows a president who seems at present to have concerns about his position within the elite to reassert his authority. When so many powerful people have guilty secrets, an anti-corruption campaign is also a great opportunity to oust a few in order to cow the many.

Of course, there is also a fourth dimension to the process. Just as the crackdown on the opposition this year has allowed various security agencies and their chiefs also to try to raise their profile and strengthen their positions, so too an anti-corruption campaign provides excellent opportunities to settle old scores and build bureaucratic empires. Serdyukov’s enemies were glad to see him go under any pretext, and if the campaign continues and deepens, expect to see some mud-slinging and whispering campaigns within the elite.

How far will the campaign go? No one among Putin’s true inner circle yet appears to be at risk. Dismissing Serdyukov carried relatively little political cost, especially given his unpopularity within the high command and defense industries. Glonass and APEC, for instance, were supervised respectively by Sergei Ivanov, the chief of staff at the presidential administration, and First Deputy Prime Minister Igor Shuvalov, both Putin men. There has been no suggestion that they may have to answer for any failures in supervision: there are definite limits to the present campaign.

It is hard to know how credible the campaign will be, though. If it is envisaged as little more than a political marketing campaign – a couple of months’ rhetoric, a few high-profile arrests, then back to business as usual – then it may well prove counter-productive. Truly fighting corruption means a dramatic reshuffle of the elite, a comprehensive change in the administrative culture of Russia. This would be a phenomenal legacy to leave Russia, but it is not yet clear whether Putin has the enthusiasm, determination and authority for the job.