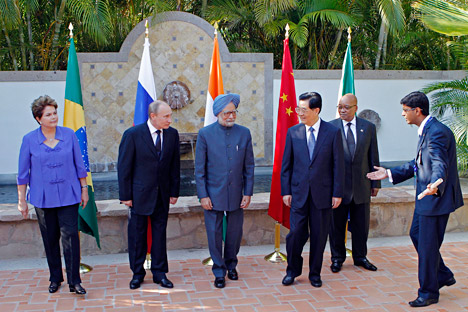 The BRICS countries are going to create own relief fund and a joint development bank to withstand economic instability in future. Source: AP

Russia's Finance Minister Anton Siluanov announced that the BRICS countries plan to set up their own regional bailout fund, which could be worth $240 billion.

The recent election of leaders to the International Monetary Fund and the World Bank showed that, despite the growing economic clout of emerging countries, the “old guard” of the U.S. and Europe is in no hurry to hand over the reins of power to newcomers. In response, the latter decided to establish their own regional crisis fund. Its exact scope remains unclear, but Russia's press has leaked information that the financial pool may well be very large indeed.

It could be comparable in size to the Chiang Mai Initiative, which is a crisis fund set up between China, Japan, South Korea, and the ASEAN economies. That mutual credit pool is now worth roughly $240 billion.

The funds would, of course, be insufficient to save the countries from catastrophe; but they are enough to provide temporary relief, says Daria Zhelannova, a senior analyst at Alpari.

The fund will allow the BRICS to create their own system of mutual lending. Moreover, in the event of a liquidity shortage, any BRICS member will be able to draw from the fund in an amount equal to its own contribution, multiplied by an as-yet-undefined coefficient.

The mutual fund will give the group its own financial reserve and preclude the need to go hat in hand to the IMF and World Bank, whose charity comes with strict obligations on the borrowing country, says head of investment operations at ACB Lanta Bank, Oleg Poddymnikov.

It could even be used to address large-scale economic development issues faced by the BRICS countries, as well as to fund financial operations (e.g., currency interventions, loans to companies).

Finally, the fund may also be utilised to assist other nations to develop ties with the BRICS, notes Investkafe analyst Ilya Rachenkov. After all, the world contains around 150 countries whose total GDP (calculated at purchasing power parity) is less than the mutual fund's slated budget.

The fund was conceived by a special working group set up under the BRICS on June 10, 2012. This same group, incidentally, is in the process of framing another joint organization — a development bank to be used to fund infrastructure projects. The exact framework of the bank and the fund is likely to be on the agenda for the next BRICS summit in March 2013, according to Russian online newspaper Gazeta.ru.

A few years ago, it was fashionable among experts to predict a change in the line-up of the BRICS, if not a quick death. However, the members themselves took an interest in the group's survival and began seeking ways to forge closer economic ties.

Despite their status as the fastest developing economies in the world, the global crisis could sabotage growth ‒ especially since most of them are dependent on raw materials, asserts Poddymnikov.

This is not just the case for Russia, whose growth has crashed from 7.5 to 4.5 percent due to Europe's ongoing malaise: China and India are the world's top agricultural producers; Brazil produces more sugar and coffee than anyone else; Russia is a global leader in oil and gas production, as China is in coal.

Experts surmise that, if such initiatives as the mutual fund and the development bank become a regular feature and succeed in bringing about the desired effect, the bloc's role in the global economy will increase even further.

It is not yet known which currency or assets will be used to store the reserves. The U.S. dollar is an option, as is the use of special drawing rights (SDR). The Chinese yuan would play into China's hands, but this is likely to be opposed by the other members of the BRICS. Moreover, the Chinese currency is not yet fully convertible.

The next step in strengthening cooperation between the BRICS, according to the Investkafe analyst, could be to extend the role of national currencies in settlements between member countries.

“However, the process could take a while. Relations could also develop through foreign trade, although there might be some overlap with the WTO,” Rachenkov said.