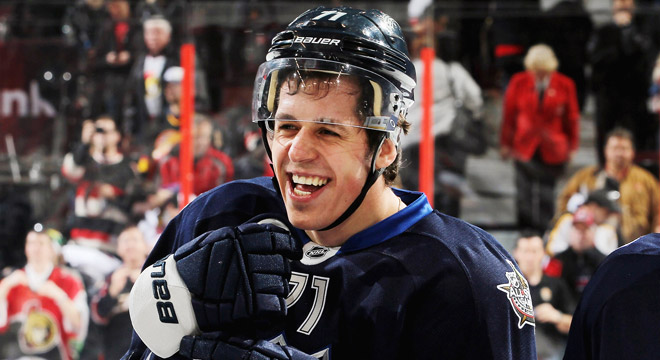 Road to the NHL: From Magnitogorsk to Pittsburgh

Evgeni’s father, Vladimir Malkin, also played hockey professionally and taught his son to skate when he was just three years old. Evgeni Malkin’s first coach on the Magnitogorsk Metallurg team was Yuri Tukaserov; he was followed by Sergei Vitman. “When Evgeni joined the team, I thought he would not last long. He was weak physically and lacked drive. His father always watched him training and supported him. On the team, he always played second fiddle, was in the third or fourth string. Who could have imagined that he would grow into an NHL star,” said Vitman. But it wasn’t until Evgeni turned 15 that hockey experts all began to notice his potential — at one point he was even rejected by a junior team in the Urals.

Playing for Russia in 2004 at the Junior World Championships in Minsk, Evgeni became a world champion. He played his first adult hockey match on Sept.12, 2003 at the age of 17 against Dynamo Moscow. He scored his first goal just three months later, on Dec. 12, in a guest match against Lokomotiv Yaroslavl. Malkin distinguished himself with a double, and Metallurg won with a score of 3:1. In 2004, he was selected second overall in the NHL Draft by the Pittsburgh Penguins. Evgeni Malkin spent three seasons – 2003/2004, 2004/2005 and 2005/2006 – playing for the Magnitogorsk club.

During this time, he grew from being a promising rookie into one a team leader. He won silver and bronze at the Russia championship in the 2003/2004 and 2005/2006 seasons, respectively). During his first season, he was named the best rookie of the season and, in the 2005/2006 season, won the Golden Helmet as the best center forward. He was also the second-highest scorer of the season after Alexei Morozov.

Malkin’s contract with Metallurg was good until April 30, 2008, but his salary was not commensurate with his level of play. Metallurg offered Malkin a new contract at three times the salary and Metallurg general manager Gennady Velichkin visited Malkin at home in an effort to persuade him. Finally, on Aug. 7, 2007, Malkin put his signature to a new contract with his old team, “under strong pressure to him and his family”, as he later said.

With Malkin on its team, Metallurg left for training camp in Finland. On Aug. 13, Malkin “got lost” in the Helsinki Airport, met his agent J.P. Barry and disappeared in the city. The next day he requested a meeting at the U.S. Embassy, and by Aug. 16, he was in the States.

Metallurg filed suit, but to no avail. Though the Arbitration Committee of the Russian Hockey Federation ruled that Malkin was not permitted to play for any other team besides Metallurg Magnitogorsk, their decision did not scare Malkin, the Pittsburgh Penguins or the NHL. In November 2006, the United States District Court for the Southern District of New York denied the motion for an injunction filed by Metallurg.

Malkin played his debut match in the NHL on Oct. 19, 2006. It was a Penguins home game at Mellon Arena against the New Jersey Devils. In play for 18 minutes and 15 seconds, he sent two pucks into the opponents’ goal. The Pittsburgh Penguins made it to the Stanley Cup playoffs in 2007. In the first round against the Ottawa Senators, the Penguins lost series 1:4. Malkin had racked up 4 points in five matches. At the end of the season, he was awarded the Calder Trophy for best NHL rookie. His performance filling in while Penguins captain Sidney Crosby was out with an injury, earned Malkin a spot in his first All Stars Game. In January 2008, after a game against the Washington Capitals, Malkin claimed that Capitals winger Alexander Ovechkin was playing dirty and trying to injure him. The players traded accusations through the press, which only increased fans’ interest in their conflict.

Pittsburgh won its division and was pronounced a favorite for the 2008 playoffs. In the first round, as in the previous year, the Penguins played against Ottawa, but this time the Penguins beat the Senators in four matches. After that, they knocked out the New York Rangers and the Philadelphia Flyers with a score of 4:1 both times and for the first time since 1992, the Penguins made it to the finals where they faced off against the Detroit Red Wings, but were unable to capture the Stanley Cup. By the end of the season, Malkin had signed a five-year contract with the Penguins worth $43.5 million. The regular championship season of 2008/09 was uneven for his team, but thanks to a new coach, the Penguins again made it to the playoffs. This season ended up being the best of Malkin’s career. Scoring 113 points, he won the Art Ross Trophy (awarded annually to the hockey player with the highest number of NHL championship points according to the goal + assist system). At the All Stars Game Malkin was in the starting lineup. In the first round of the playoffs, Pittsburgh beat Philadelphia, and in the second round it overpowered Washington in seven matches. After that, the Penguins made short work of the Carolina Hurricanes (4:0). In the final series, Pittsburgh met Detroit. As in the previous year, the Red Wings won the first two matches, but then the Penguins managed to even the score.

After that they traded victories and met for a decisive seventh match. Pittsburgh won (2:1) and avenged its defeat from the year before. Malkin racked up 36 points in the playoffs. He won the Conn Smythe Trophy (awarded annually to the best player in the playoffs) and the Stanley Cup.

“I’ve never been in any long fights, maybe 10 or 20 seconds. Adrenaline is pounding in your head, you don’t notice anything, don’t feel pain, you’re just swinging your fists and wanting your opponent will fall down. In the NHL my first fight was with [Swedish forward Henrik] Zetterberg. In Russia I got into fights once or twice, but they pulled us apart pretty quickly.”

“It’s my bad luck that I joined the Pittsburgh Penguins late and Mario Lemieux had already finished his career. More than anything, I would like to play on the same team with him.”

About Sochi 2014 “If the NHL does not let the players go to the Olympics, I will go to Sochi and pay the fine. Disqualification for a couple of years? I can play the two seasons in Russia.”

Malkin’s next season was weaker due to injuries and an unsuccessful showing at the Olympics in Vancouver. During the 2010/11 season, Malkin played only 43 games and had to sit out the rest of the regular championship and playoff season because of serious injury to his right knee. By the 2011/12 season, however, Malkin was back to his old form. The Pittsburgh forward was the highest scorer in the regular NHL championship, with 50 goals and 59 assists. Malkin won the Art Ross Trophy for a second time.

Hockey aside, Malkin’s favorite sport is ping pong. He spent his whole childhood, after hard training sessions on the ice, playing ping pong. Malkin owns a restaurant in Magnitogorsk which is designed to look like the inside of a prison. In the U.S., Malkin lives with a cat that he picked up on the street. In Russia he had a dog, which is now in the care of his parents.

Malkin drives around Pittsburgh in a Porsche Cayenne. He loves vintage automobiles, but so far has not had time to buy any. His dream is to ride a motorcycle, but for safety reasons, he is putting this off for some later date.

Malkin has a girlfriend, Oksana Kondakova, whom he met in a nightclub in Magnitogorsk. Kondakova was delayed in joining Malkin in the U.S. because she had to wait for a visa, but when she finally arrived, it was to a $1.5 million mansion in the Pittsburg suburbs. When her visa expired, Kondakova returned to Russia. She lives in Moscow and studies at the Institute of Television and Radio Broadcasting.