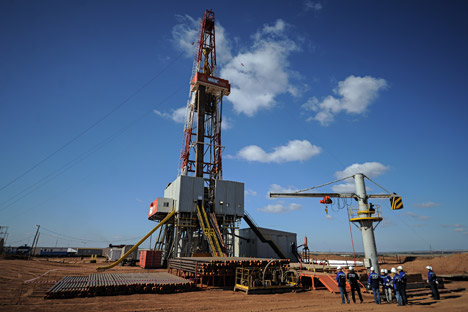 Decaying infrastructure, extreme weather conditions, a decreasing population and the legacy of Soviet economic planning all blight the Far East.

Decaying infrastructure, extreme weather conditions, a decreasing population and the legacy of Soviet economic planning all blight the Far East.

As part of a recent drive to reverse the decline — highlighted by Vladivostok's hosting of the Asia-Pacific Economic Co-operation Forum in September — the Kremlin has sought to create a series of new state organisations with a strictly regional mandate.

But there is room for another player, Bazhenov said in a recent interview. The Far East Development Fund that he manages was itself set up in 2011.

“It's essential to have one body empowered to act in the name of the state to formulate investment project proposals,” Bazhenov said, adding that there is currently no organisation capable of balancing regional and federal interests.

“While we go from one to the other, our lives will slip away.”

An idea to create a $17 billion state-run Far East development corporation was discussed within the government earlier this year, but it came to nothing. Reports at the time suggested that then-Emergency Situations Minister Sergei Shoigu and Deputy Prime Minister Igor Shuvalov were candidates to lead such an entity.

In April, Shoigu even suggested moving the country's capital to Siberia.

Russia's northern and eastern regions have always demanded special political and economic management, which was visible under the Tsars and the Soviet Union, said Sergei Sanakoyev, president of the Russia-China Centre for Trade and Economic Co-operation.

But until the creation of the government ministry and funds like Bazhenov's, this had been lacking in modern Russia.

“History shows that there are a lot of places that require a special approach,” he said. “And [in Russia's Far East] it has always been like that.”

The figures are enormous. Up to 3 trillion roubles ($94 billion) will be required to develop the Far East over the next 10 to 15 years, Bazhenov said.

The Far Eastern Development Fund, a subsidiary of the national development bank Vneshekonombank, or VEB, is expected to receive allocations of up to 2 trillion roubles through 2020. Prime Minister Dmitry Medvedev said last month that the Fund could get up to 15 billion roubles via a re-capitalization of VEB.

The area that the fund covers — including the Zabaikalsk region, the Irkutsk region and the republic of Buryatia — includes 45.5 percent of Russia's territory, and just 7.6 percent of its population.

The overwhelming need is for transportation infrastructure. Bazhenov estimated that 70 percent of the development required in the Far East is related to road, rail, port and air facilities.

“If we talk about the development of infrastructure,” he said. “Then the state must take on the risks.”

Last week the Far East Development Ministry submitted a list of over 90 priority projects to VEB. The majority of them were infrastructure projects and the most ambitious included the modernization and reconstruction of the Baikal-Amur mainline, the modernization of the Trans-Siberian railway, linking the Trans-Siberian with the Trans-Korean railway and the building of a bridge that will connect Sakhalin to the mainland.

Despite the huge demand for Siberia's natural resources from neighbouring China, however, much of the proposed infrastructure development will service East-West routes linking the Far East to European Russia.

Diversified development should be the state's priority, Bazhenov said. “Just because there is big demand for natural resources in China does not mean that the Far East should turn into one big mine.”

The Fund lowers risks for investors by becoming an equity investor, or providing shareholder loans. It also helps municipal authorities to formulate investment proposals and trains local officials in the art of attracting investors. Bazhenov described it as an organisation that can initiate a “chain reaction” in terms of stimulating investment and development.

“We need a re-branding of the Far East so that investors view it as a Klondike,” he said.