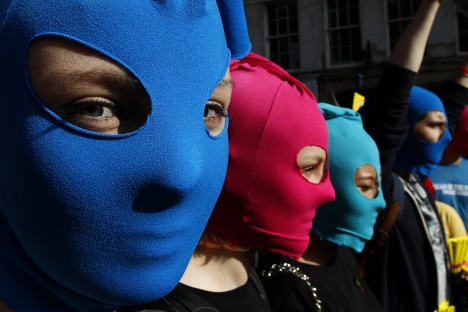 A new book, “Pussy Riot: What was it?” went on sale on Russia’s major online stores this week. Source: Reuters / Vostock Photo

A new book, “Pussy Riot: What was it?” allegedly written by Nadezhda Tolokonnikova, a jailed member of the feminist punk group, went on sale on Russia’s major online stores this week.

While the book could easily become a bestseller, Moscow-based publisher Algoritm may face copyright infringement charges after supporters of the band accused the publishers of lifting material from already published interviews and Internet posts by Tolokonnikova and other Pussy Riot activists without their consent.

“Nadya didn’t write a single text for “N. Tolokonnikova’s book” and has no idea what kind of book it is,” Pyotr Verzilov, Tolokonnikova’s husband and an activist with the controversial performance art group “Voina” (War), wrote on his Twitter page Tuesday.

“It’s a hellish story,” Verzilov told Gazeta.ru. “Algoritm actually compiled texts from blogs and [Pussy Riot] activists’ interviews published before, and passed it off as a book by Tolokonnikova.”

Algoritm’s director, Sergei Nikolayev, confirmed to Gazeta.ru that the publisher brought out the book but refused to provide further comment, saying he needed to “think it over.” Verzilov told Gazeta.ru that Nikolayev contacted him a few days ago to “settle it.”

“We had one strict condition: they should remove all announcements and ads and then at least ask the activists who are in colonies, for starters,” Verzilov was quoted by Gazeta.ru as saying.

Tolokonnikova is currently serving a two-year sentence on hooliganism charges with another Pussy Riot member, Maria Alyokhina, after dancing and singing the song “Holy Virgin, chase Putin out” in Moscow’s Christ the Savior Cathedral last February.

Tolokonnikova and Alyokhina were sentenced in August with a third band member, Yekaterina Samutsevich, who was freed by a Moscow court in October on appeal after the judge ruled that she had played a lesser role in the performance.

On the publisher’s website, the book is marketed as “the story of Russian activism through the eyes of an active member of the Voina art group and the leading thinker of Pussy Riot.”

According to the publisher, the edition “provides answers to many questions spawned by the performance at the Christ the Savior Cathedral, including the main question that everyone is definitely concerned with: ‘What was it?’”

A spokeswoman for Eksmo, Tatyana Kashirina, confirmed the publishing house’s involvement, but declined to comment on the issue of copyright. “We published this book with Algoritm,” Kashirina told Vzglyad daily. “But we have little to do with this.”

The story is based on materials from Lenta.ru, Vzglyad and Gazeta.ru