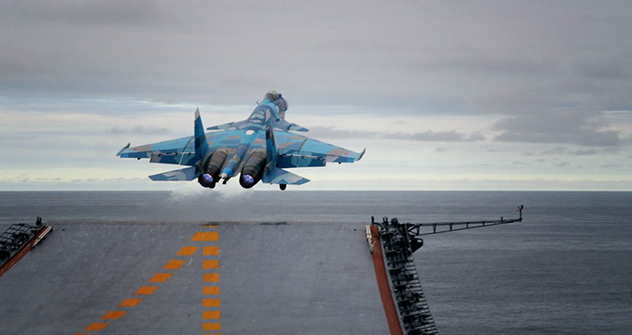 Negotiations for upgrading Sukhoi Su-30 fighters are at an advanced stage, according to Indian defence sources.

Even as a $3.77 billion Super Sukhois deal is likely to be signed between India and Russia during Russian President Vladimir Putin’s much-awaited visit to New Delhi next month, India is at an advanced stage of negotiations with Russia for clinching another deal for upgrading its fleet of Sukhoi Su-30 fighter planes.  This deal may be worth $1 billion, depending on the negotiations, defence sources here said.

The Russians would obviously like to see this deal coming to fruition but are not acting desperately. The Indians, on the other hand, are weighing their options closely and are cleverly using a newly acquired card: there are other players as well in the market. The negotiations are currently believed to be very delicately poised and neither of the two sides is giving it up just yet despite the complexities and intricacies.

The ongoing negotiations are significant as India is scheduled to raise its eighth Sukhoi SU-30 squadron by December 2012. The squadron will be based in Sirsa in Haryana, close to the Pakistan border and will be the IAF’s third Su-30 squadron to be deployed close to the Pakistan border in 14 months. The previous two newly raised squadrons are located in Jodhpur in Rajasthan and Halwara in Punjab.

The plan envisages upgrading the Indian Air Force’s fleet of Sukhoi Su-30s with a new radar and avionics to make the fighters more lethal. It will cover the initial batch of Su-30s that Russia delivered to India from 1997 to 2004. Some 40-odd aircraft will be upgraded once the deal is signed. The upgradation work is likely to begin in 2015.

The two countries may also decide to upgrade MKI-series of Su-30s with new avionics. These aircraft are comparatively newer acquisitions for India. Though the MKI-series aircraft are already upgraded, fitting these with new avionics would increase their lethal power. The entire deal for the upgrades, if the MKI-series is also roped in, may cost India one billion dollars. The Su-30MKI sports a Russian radar and optic locator, French navigation and heads-up display systems, Israeli EW and weapon-guidance systems, and Indian computers.

Should the ongoing negotiations fructify, an important take-away from the Indian point of view would mean India getting full access to all software and equipment design of the new systems that will be integrated on the upgraded planes. Once new radars and avionics are fitted on the Su-30s the planes will get a new lease of life and their strike power would be enhanced substantively.

The Su-30 system is meant to be a fighter aircraft family system outside of Russia, tailor-made for Indian requirements. Though almost two decades old, several squadrons of this Russian aircraft form an integral part of the contemporary India’s air defence. As a basic platform for the multirole heavy fighter aircraft, the Su-30MKI is remarkable primarily for its universality, the IAF has officially acknowledged. It boasts a so-called “open architecture”, making it relatively easy to add new systems in the basic electronic equipment and to use advanced guided weapons (supplied by different manufacturers).

'Su' stands for a production fighter designed by the USSR/Russia's famed Sukhoi Experimental Designed Bureau. Su-30 derived from the Su-27UB, which is the twin-seat trainer-combat version of the Su-27. Therefore all Su-30 versions are twin seaters (except for Su-30KI). 'MK' is a Russian acronym for Mordernised-Commercial (not 'Multirole') while 'I' stands for Indiski(India) in the Su-30MKI, while 'K' stands for Kitei(China) in the Su-30MKK. Names apart, there are many central differences between the Su-30MKK and Su-30MKI.

According to the data released by the Indian Air Force, the sheer number of Su-27 variants is bewildering. Many developments have been made in 'parallel' over the decades, and hence there is no single timeline for the MKI. The first Su-27 variant with TVC was a Su-27UB designated "T-10-16" or the "LL-PS" (flying test bed - flat nozzle), built by Sukhoi in 1989.

The Chief Designer for the export Su-30MK is Alexcy Knyshev. According to Knyshev, the Su-30MK is capable of performing all tactical tasks of the Su-24 Fencer deep interdiction tactical bomber and the Su-27 Flanker A/B/C air superiority fighter while having around twice the combat range and 2.5 times the combat effectiveness (Sukhoi numbers).

Russia vigorously promoted the Su-30. It has made regular air show appearances after its debut at Paris AirShow 1999. However, initially the displayed aircraft was a Su-27UB which only carried a wide variety of air to ground missiles (which it could not launch). The weapons were KAB-500KR TV guided bomb, Kh-29T and Kh-59M. At that moment, there was no Su-30M or Su-30MK, only the Su-27PUs were renamed as Su-30 (probably for marketing purposes).

The SU-30MKI is the first Russian aircraft designed in collaboration with a foreign customer. It was born when the IAF decided to acquire the Su-30MK and include modifications according to its needs. Its competitor was the Mirage-2000-5, an excellent multirole aircraft in its own right. It had the advantage over the Su-30 given that the IAF was extremely satisfied with the results from the Mirage-2000H. However, the SU-30MKI was found to be a lot cheaper than the Mirage-2000-5, which ultimately proved to be the deciding factor.

The induction of the Su-30 into the IAF is a bit confusing for some. This is due to the fact that three different deals where signed, delays in the program and also due the fact that IAF has been operating Su-30s (since 1997) which are not Su-30MKIs but Su-30MKs. However, since they are being operated by the IAF, they are referred to as Su-30MKIs by some. Here Su-30MKI refers to the final version of the aircraft, and not those which saw service with the IAF since 1997.

The last word is yet to be out on the outcome of the ongoing negotiations. Perhaps it should before December 24 when Putin is now scheduled to arrive in New Delhi.

The Indians have learnt over the decades that the Russians are very hard bargainers. India’s master card is that the Russians are no longer the solitary suppliers of defence equipment to India. At the same time, the Indians are mindful of the fact that the deal perhaps needs to be sweetened further to ensure that Putin’s proposed India visit is productive from Moscow’s point of view as well.