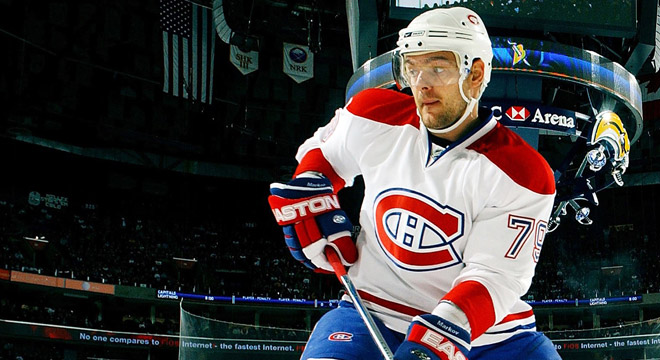 Extremely successful on all arenas

Road to the NHL: From Voskresensk to Montreal

Andrei Markov began playing hockey on his local team in Voskresensk, Khimik, where he was a regular from 1995 to 1998. After playing three seasons with the main Khimik tea, he entered the NHL draft. Every Russian hockey fan was aware of the his powerful slap shots, accurate passes and risky offensive raids. Yet the scouts weren't convinced by Markov's status as the best defenseman in the 1998 World Junior Championship.

At that time, the tone was set by big guys like Bred Stuart, Brian Allen and Vitaly Vishnevsky, and Markov did not fit.

Not selected for the NHL, Andrei decided to try Dynamo Moscow. He stayed with Moscow’s top club for three years. It was obvious that the player had a bright future ahead of him: he was compared with the best NHL players in his position. With Markov on the team, Dynamo won the national championships twice and reached the European League final, where Markov scored the goal that nearly ruined Boris Tortunov’s career, and earned a silver medal.

After being named Russia’s No. 1 defenseman in 2000, Markov moved to Canada where he spent two seasons getting acclimatized, including a few months in a Quebec farm club.

The 2007/08 season was the best of his career to date: Markov was selected to his first NHL All-Star game as a starter, and was extremely successful in the international arena as well. Together with his Russian teammates, Markov helped to achieve a stunning victory over the Canadian host team (5:4) in the World Championships final.

“How could I ever forget it? Of course I was phenomenally lucky. There were 10 seconds remaining in the third period, and I just wanted to hit the puck into the zone and let them take it from there. I only realized I’d scored a goal when the whole team rushed up to congratulate me. I still remember those happy seconds.”

“It was fantastic! We beat one of the best teams in the league. It felt so good.

During the first few shifts, I had to get used to the speed of the game, but then everything went just fine. I still need a little time to feel completely comfortable with the speeds and get back my old skills for reading the game. I don’t know how much time I’ll have off in the next match. I just like playing.”

“I’m not a quitter. If there’s a chance, you have to take it. I wasn’t going to give up. It wasn’t easy, but everyone gets injured in the course of their career. Some hockey players have even bigger problems with their health than I do. But they returned to the NHL. I’m not the first to do it, and not the last.”

During the 2010/11 season, Markov played only seven games. On Nov. 13, 2010, as the result of a knee-to-knee collision with Carolina Hurricanes Captain Eric Staal, Markov suffered a serious injury requiring surgery. It took him nearly a year and a half to fully recover. Andrei first returned to the ice on March 10, 2012 in a game against the Vancouver Canucks.

Being a media darling

Now vice-captain of Montreal, Markov is known as one of the best hockey players today. His outstanding play and devotion to Montreal have made Markov a media darling. After a childhood spent playing center forward, Markov is now a leader of the Canadian club where his superior passing skills are always on display — he has racked up more that 250 assists. As a member of a team not likely to try for the Stanley Cup anytime soon, Markov is at the top of his game. At the 2007 World Championships, Markov was named the tournament’s best defenseman. At the 2008 victory forum, Markov demonstrated world-class hockey and he was thanked by the president of the Russian Federation for his great contribution to the victory of Russia’s national hockey team at the World Championships. Markov considers the highlight of his career the goal he scored playing for Dynamo Moscow Dynamo against Mettallurg Magnitogorsk in the finals of the 1999 Euroleague tournament. He skated down the whole length of the arena and evened the score just eight seconds before the end of the match.

Markov keeps his private life strictly private. He loves to travel. He has a son.

In spite of having seen many different countries, Markov’s favorite place remains Sochi, the resort city on the Black Sea; he goes there almost every vacation. Markov is also very fond of soccer. He supports the Italian team Juventus and never misses a single match of their Serie A tour. Markov’s favorite player is the Juventus midfielder Andrea Pirlo. His closest friend is his former teammate from Dynamo Moscow, Lev Berdichevsky.