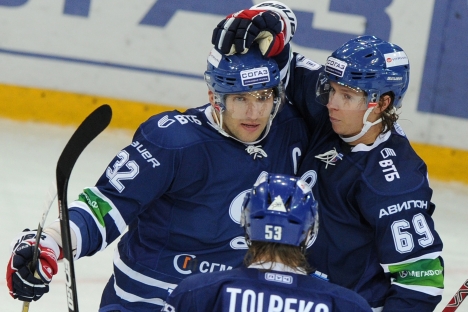 Nicklas Bäckström is the NHL’s brightest star to move to a Russian KHL club since the start of the NHL lockout. The 24-year-old Swede is now playing for Dynamo Moscow, in the same line with his Washington Capitals mate Alexander Ovechkin.

Dynamo signing the Swedish forward is part of the plan to reunite the super-scoring Bäckström-Ovechkin duo. Bäckström gave an interview to Rossiyskaya Gazeta against the backdrop of a life-size cutout of Ovechkin in the lobby of the Dynamo headquarters. “The perfect backdrop,” Nicklas said, smiling right before the interview.

Ovechkin was the first to call

Rossiyskaya Gazeta: Nicklas, they say Ovechkin is the main reason you have come to Dynamo…

Nicklas Bäckström: Right, he called me and asked whether I wanted to play for Dynamo. I was glad he called. But I had never played for a Russian club before, so I thought about it for about two weeks. When I realized that the NHL season may not start for a while, I decided to accept the offer. So, Alex was the first one to call. He also translated during the negotiations. 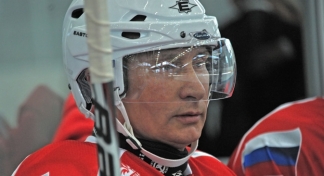 RG: Are you and Alex close? Can you call yourselves friends?

N.B.: We can. We played in the same line for Washington for five years. Naturally, we spent lots of time together off the ice, too – we went to restaurants together and so on. We have our personal lives and interests, but we are quite close.

RG: You scored three goals against Vityaz Chekhov in your first game following the break. Are you happy with your form? Do you think you’re making progress?

N.B.: I played five good games before the break, but I can do better. I need time to get used to it. I hope that I’ll be able to play better now, after the break.

RG: Ovechkin has just come back after an illness. That has to make you feel better.

N.B.: Of course it does. He is a great player, and I love playing alongside him.

RG: When do you think the NHL lockout will be over?

N.B.: I have no idea. Talks are underway, but no one knows how long the lockout will last, except the club owners.

RG: Don’t you have some insider information?

RG: First you wore number 99 in Dynamo, but American fans said that if your name isn’t Wayne Gretzky, then you have no right to wear number 99. Was that the reason you changed your number to 69?

N.B.: In a way it was. You can understand the fans. To be honest, it never really occurred to me. When I realized, I tried to change the number. But it was too late, I was signed under this number and I had to play a couple of games with number 99 on my jersey. They’ve changed it now. I’d just like to forget about it and never talk about it again.

RG: But number 99 is not sacred for Russian fans…

Lucky to get to Moscow

RG: What are your first impressions of Moscow?

N.B.: It is a nice city. We have an excellent base and perfect conditions for practice. I’m lucky to be here. Many people speak English here, so there are no language problems. There are fewer English speakers in other Russian cities, so it’s easy here.

N.B.: I’ve seen your traffic jams – it’s not something you’d like to see every day. I don’t drive in Moscow. On the other hand, it’s quite understandable. There are so many people living in Moscow ‒ it’s only logical that there are so many cars out there.

RG: Where are you living right now? At the Dynamo base?

N.B.: No, I’m still living in a hotel. We’ll see where I’ll go next, but I have no intention of moving any time soon.

RG: How do you like hockey in the KHL? I mean, not only the size of the rink, but also the speed of the game and the atmosphere?

N.B.: In many ways, it is very similar to the NHL. The main difference is the size of the rink. It is smaller in the NHL, and the game is slightly faster there.

RG: There is another difference ‒ the stands at KHL arenas are often half-empty. What should be done to improve attendance?

N.B.: It’s hard. There are three teams in Moscow, and people work late and often can’t get to the arenas in time because of the traffic.

RG: But traffic is bad in New York. There are two teams there and every game is a sellout.

N.B.: It is a difficult question, and I don’t have an answer. I guess the Russian clubs need to focus on publicity. They do everything they can for fans in the NHL – they meet with them, visit schools and attend various events. They pay attention to promotion, and that’s what you can learn from the Americans in order to make hockey more popular here.

RG: Why aren’t the Americans and Canadians coming to the KHL during the lockout?

N.B.: I don’t really know. Maybe it’s because they don’t know this country and are afraid of going into a strange environment. It is hard to give reasons for them, because I’m Swedish, not American. We have different perspectives.

RG: How did your family react to your decision to go to Russia?

N.B.: They were fine with it. I told them that I hadn’t seen all of Russia, but I liked Moscow, and I wanted to play there. My parents and my brother wished me luck.

RG: Your father played ice hockey in Sweden. Has he heard about Dynamo? The name should be more recognizable to him than it is to American players.

N.B.: We haven’t spoken about it. My dad played his whole career for a small Swedish club. Brynäs is different. When you come here and see the jerseys of the former Dynamo players at the base and its trophies, you can feel its history. You get the idea that you’re playing for a big club.

RG: Do you know a lot about the history of the club?

N.B.: I haven’t researched it, but I sense this history around me. I see the great players that used to play for Dynamo. Ten championship titles – that’s impressive.

RG: Do you have plans to bring your parents and brother to Moscow?

N.B.: I do. They are flying to Moscow next weekend. I will show them Red Square and take them to a game. I don’t know what else to show them. Do you have any pointers?

RG: It may take a while. I know that another Swedish player for Dynamo, Richard Gynge, has had a tour of Moscow. He will surely have some advice for you.

RG: Will your girlfriend be coming as well?

RG: What did she think about this twist in your career?

N.B.: It is what it is. She understands that I want to play hockey, even though there is no season in the NHL. So she supports me. When I told her about Russia, she agreed to move here with me. There were no problems. On the contrary, she sees it as a new and valuable experience – to see how you, Russians, live here.

RG: What do you do when you’re not playing hockey? Do you go out? Do you have any places you like?

N.B.: During the first two weeks, I hardly saw anything. There were many games and trips. During the break, I went to the center of Moscow, checked out Red Square and did some shopping. I bought some stuff in GUM. I like it.

Don’t think about the lockout

RG: You became Sweden’s youngest ever world champion back in 2006. Do you often think about that victory?

N.B.: It was a great experience. I was 18, I played a few games and we won. It was just a great feeling.

RG: The next world championship will be held in your native Sweden. Would you like to play there?

N.B.: It depends on many things – whether the lockout continues, what kind of form I am in. We’ll see. No one can say for sure now.

RG: Is it hard for you to play when you know that everything can change any minute, that the NHL lockout could come to an end and you’ll have to leave?

N.B.: I’m trying not to think about it too much. I’m focusing on my game and doing my best for the team to win. Whatever happens, happens.

N.B.: I like football. I played when I was a kid, but now I watch other people play. I support Arsenal.

RG: Do you watch Arsenal games in Russia?

N.B.: I don’t. I don’t have any time to watch TV. I normally practice and take rest when I’m not playing.

N.B.: If I have time. You catch some words from guys during practice, in the locker room.

RG: Not all of the locker room words are good enough to use in public…

N.B.: Yeah, I know plenty of those. I heard them from Ovechkin when we played for Washington.