Why a military coup is impossible in Russia 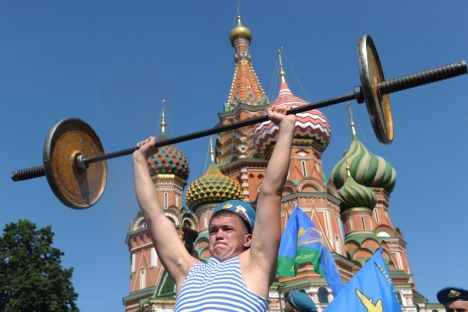 Why a military coup is impossible in Russia. Source: RIA-Novosti

Russia is a nuclear power and its forces are heavily guarded by the intelligence services, and even if riots start brewing among servicemen and women, the FSB will doubtless react before it reaches boiling point, experts believe.

Two senior officers are currently on trial in Russia for attempting to organise coups, but few believe a military-led uprising could succeed in the country in the foreseeable future.

“There are no grounds for any such nonsense as a military coup in Russia,” said Igor Korotchenko, military expert and editor of National Defence monthly magazine.

Tough-talking President Vladimir Putin, under whom tens of thousands of servicemen were handed apartments and enjoyed substantial salary raises, enjoys a certain popularity among the military, something no potential military coup plotter can hope to equal, he said.

A retired special forces colonel and a popular nationalist figure, Vladimir Kvachkov, 64, is on trial in the Moscow City Court over charges of organizing a group of military servicemen, arming them with crossbows and training them to seize a tank division in the town of Kovrov, 270 kilometres west of Moscow, in order to overthrow the government.

Petraeus winds up the Afghan war

Two years ago, Kvachkov was acquitted of organising an attempted assassination of Anatoly Chubais, an architect of the country’s market reforms which impoverished millions of Russians in the turbulent 1990s.

The day after a higher court upheld the acquittal, a Moscow court sanctioned his arrest on mutiny and terrorism charges, which carry a prison sentence of up to 20 years. Kvachkov denies any wrongdoing.

In a separate case, Afghan War veteran and retired colonel Leonid Khabarov, 65, was arrested last year in the Urals city of Yekaterinburg after the Federal Security Service (FSB) accused him of plotting an armed mutiny.

According to the charges, Khabarov and his alleged accomplices planned to break into the local offices of the FSB, the Interior Ministry and Emergencies Ministry, kill the top officials there, and blow up several electricity stations, causing a city-wide blackout, in order to provoke rebellion in the army. Khabarov is also suspected of heading the local cell of Kvachkov’s front.

Khabarov denies the charges and is currently on trial in a Yekaterinburg court. If found guilty he faces over 20 years in prison. Even if the allegations against the two retired military commanders are found to be grounded, a crossbow mutiny seems more than unlikely to succeed. The same can be said of a rebellion triggered by a blackout. But these cases raise the question: Is a military coup even possible in Russia?

Russia’s military has a rebellious past, the Decembrists’ failed coup of 1825 being just one of the best-known episodes. Less than a century ago, a significant proportion of those in Russia’s army were swayed by the vision of Communism aggressively promoted by the Bolsheviks in the trenches of the First World War, and supported the 1917 revolution that overthrew the Tsarist regime.

In the following decades, Stalin purged the top brass of its most popular leaders, some historians have suggested, because he feared a military coup.

But thousands of Russian soldiers switched sides during WWII, opting to fight alongside the Nazis against the Red Army. In 1991, Communist hardliners seeking to oust reformist Soviet leader Mikhail Gorbachev called on the military for support. This support, however, did not materialize.

Through most of the 1990s and early 2000s, quite a few political underdogs, particularly those in the nationalist and Communist camps, have raised the spectre of a budding coup launched by disgruntled servicemen, unhappy with the living conditions they ended up with even after serving their country in two Chechen wars. But not a single military unit has ever been reported to have rebelled or disobeyed their commanders’ orders.

As Putin started pouring money into the Russian Armed Forces, this talk all but disappeared from the public discourse.

“The majority [of the officers] support Putin,” said Korotchenko, who is also head of the Defence Ministry’s public council. “Putin is a great authority for them.”

But this is only partially true. Analysts at the Institute of Globalization Studies and Social Movements, a Moscow-based think tank, recently published a report saying that some of the prerequisites for a successful military coup scenario are present in Russia.

Related: A ban on Nazi symbols and propaganda

They predict that if there is a military revolt in Russia, “it will develop from the bottom, without generals, but including retired servicemen.”

“Many in the military are leaning to the left, and vote for the Communist Party,” said Ivan Shchyogolev, a military analyst with the institute, highlighting the fact that they are not loyal to the government. But, as yet, they stop short of openly protesting against it yet, he said.

Another researcher at the institute, Vasily Koltashov, wrote that “even though the military are depicted as pro-nationalist, they are not happy with the government’s rightist social and economic course.”

This study is based on a comparative analysis with countries such as Portugal, Spain, Greece and Latin America, Shchyogolev explained.

Recently, thousands of soldiers in civilian clothes marched through Lisbon to protest against next year’s austerity budget. There has never been a military protest on that scale in Russia.

Russia is a nuclear power. Its forces are heavily guarded by the intelligence services, and even if riots start brewing among servicemen and women, the FSB will doubtless react before it reaches boiling point, experts believe.

The authorities simply do not fear the possibility of a military coup, and are confident that the intelligence services would be able to contain any mutinous activity, Shchyogolev said.

In addition, the recent replacement of unpopular former tax official Anatoly Serdyukov as Defense Minister with well-perceived former Emergencies Minister Sergei Shoigu will further appease the top brass. Serdyukov was ousted from his post on November 6, shortly after a probe was opened into suspected massive corruption deals within the ministry that cost it in excess of 3 billion roubles ($95 million).

Former lawmaker with the State Duma security committee, Gennady Gudkov, who served with the KGB, said that the military will not join the protests in the near future. However, he added, the potential remains that, further down the line, they may decide otherwise.

“Putin is Putin. But why should they side with corrupt officials?” Gudkov asked rhetorically in an interview, referring to the series of corruption scandals in the Defence Ministry. “The servicemen cannot tolerate this situation indefinitely,” he added.

Shchyogolev agreed that “a military coup is plausible, but it cannot happen today” and requires more discontent with the government.