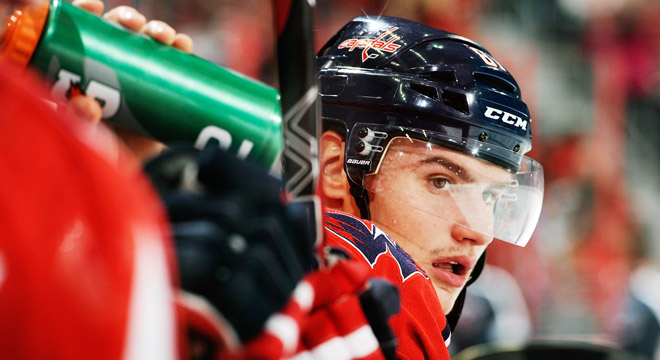 Road to the NHL: From Novokuznetsk to Washington

Orlov is a product of the Novokuznetsk ice hockey school. On all of the junior teams for which he played, he was the leader in every category, so it's no wonder he made his debut in the Russian Superleague at just 16. During the first two years, he trained rather than played with Metallurg Novokuznetsk – he appeared in only 22 games and scored only a single goal. But the following season, everything changed. Under the lead of head coach Dmitry Parkhomenko, Orlov became an indispensible defender. He was never scared of tough play, despite his modest physique, and his opponents often lost concentration.

The team was short of forwards, and Orlov often joined the attack, even though this sometimes prevented him from performing his main job properly. During that season, Orlov scored four goals and three assists in 41 games. “I only have good words to say about defender and now forward Dima Orlov. At the age of 18, he is already playing using his head,” said former Metallurg coach Sergei Nikolayev. The young defender’s game impressed NHL scouts.

In 2009, Dmitri Orlov was thought to be one of the best young defensemen in the NHL draft, but 19 others were chosen before him until Washington, known to have a soft spot for Russian players, recruited the kid from Novokuznetsk. The trouble, of course, was the “Russian factor,” fear of drafting Russians because they might prefer making much bigger and easier money in the KHL. Orlov was only the second Russian player picked in 2009. Florida had picked defenseman Dmitri Kulikov in the first round, who then played in the Quebec Junior League and was thought to be “reliable.”

If Washington’s fans had any doubts about the choice of Orlov, he erased them during the 2011 Junior Championship, when he became one of the heroes of the Russian team. Orlov earned 9 points in 7 matches, and the U.S. capital was abuzz with anticipation. Immediately after the end of the season with KHL, Orlov signed a contract with Hershey, the Capitals farm club, and made his North American debut in February 2011.

His very first appearance brought rave reviews. A local journalist wrote after the first period: “these were the best 20 minutes played by a rookie I have ever seen.” Orlov began the 2011/12 season with the Hershey, but was recalled to the main team after scoring three points in a single match. He has never left the main team since then.

In Russia, Orlov was one of the most talented defensemen, with an inclination to attack: his actions in power play and powerful shots from the blue line assured the success of his junior team.

In the 2009/10 season, Orlov won the Vitaly Davydov Prize for the most valuable MHL (Russian junior hockey league) play-off player, after winning 19 points in 17 matches for Kuznetskiye Medvedi. He won the honor even though Medvedi lost the Kharlamov Cup final.

“I like it although it will take a bit of getting used to. In Russia, I never saw fans wearing jerseys with my name.”

“Yes, the smell is there. In some places a very strong smell. But that is OK. In Novokuznetsk, we have steel plants. Sometimes the city is shrouded in smoke. I am used to it. I have no problems with chocolate.”

“There are fights in the NHL, but they are mostly between tough guys. I don’t mind fights – if you can fight, you should. If you can’t, you should play.”

In the U.S., the Russian defenseman is more cautious, concentrating on his own zone and body checking. In his second match for the Capitals, he used a powerful body check against Winnipeg’s forward, proving that he felt comfortable playing North American style. In the KHL, Orlov played as number 9 but, in Washington, he was given an unusual number – 81. Dmitri hopes to get back his favourite number in the future.

After the Russian victory at the world junior championship, Orlov found himself in the midst of a minor scandal. As a reward for the victory, the hockey star’s family were promised a new apartment and Orlov and his parents were even taken to see it.

But then things ground to a halt, either through negligence or the usual bureaucratic red tape. It was only after the Kemerovo Region authorities stepped in that the housing issue was resolved.