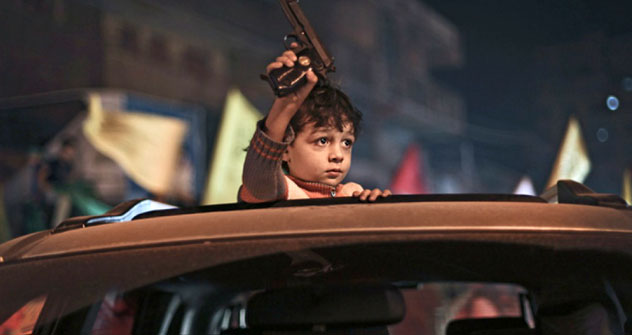 The growth of radicalism is not only a matter of concern for India or Russia, but rather a concern for all multiethnic and pluralistic societies.

Russia’s Interior Ministry last week revealed that it arrested 9 suspected extremists, out of which five were related to the outlawed organization Hizb ut-Tahrir (party of Islamic liberation), whose stated goal is to establish Islamic state. As per the revelation, the police discovered firearms and explosives, and counterfeit currency worth $1 million and €2 million, and unearthed the plans of the groups to orchestrate attacks in busy places. The ministry stated, “nine citizens of Russia and the Republic of Tajikistan have been charged... on suspicion of organising activities of the international terrorist organisation Hizb-ut-Tahrir and having in their possession explosives, weapons, and ammunition.”

Though the organisation was banned by the Russian Supreme Court in 2003, its strength has appeared to grow in past few years particularly in the republics of Tatarstan and Bashkortostan. Its role particularly in distribution of extremist literature and mobilising the youth has become a matter of concern for Russian authorities.

The organisation founded in 1953 in the Middle East has an overt agenda of preaching Islam. Preaching Islam per se may not be illegal or ethical as was done by Sufis of Central Asia or India through methods like devotional songs and dances. Some of the great Sufis like Kabir had followers from different religions. The shrines of Sufi saints are visited by followers of different faiths. One of the most famous Sufi shrines in Indian city of Ajmer is thronged by thousands of Hindus and Muslims every day. The question is not the issue of religion, or its preaching, but the issue of means of preaching. Promoting one’s religion at the cost of degrading other’s religion is not only dangerous to the other religion, but also dangerous to multiethnic pluralistic societies like India and Russia. One of the landmark bilateral agreements in this context is the agreement on the protection of multiethnic and pluralistic societies between Narasimha Rao and Boris Yeltsin in Moscow in 1994.

As the Sochi Olympics are approaching, the concerns in Moscow are expected to be high. Already a volatile south, the rising menace of Hizb ut-Tahir in some of its republics, not very far from Sochi, is a matter of concern. Extremists will rejoice at every prospect of derailing the event, and targeting Russia’s image and prospects. There is every possibility that this organisation has links with other radical organizations and their leaders like Doku Umarov, who dreams of a North Caucasian caliphate and was responsible for the deadly attack in a Moscow airport in January 2011. Another concern is these radical organizations also target moderate Muslims, who do not follow their radical agenda. The deadly attack on the mufti of Tatarstan in July this year was allegedly carried out by Hizb ut-Tahrir. In India too there are many cases when moderate and reformist Muslim leaders fall into victims of bullets of militants. One of the highlighted cases was the case of Abdul Ghani Lone, who was killed by the militants as he advocated participation in electoral process in Kashmir.

The growth in radicalisation is not only a matter of concern for India or Russia, but rather a concern for all multiethnic and pluralistic societies. This radicalisation process must be tackled through a two-pronged process. First, some of the causes of violence such as poverty, underdevelopment and alienation need to be addressed by the authorities at the federal level in collaboration with the authorities at the local level. Russia has taken some positive steps in this regard by offering federal largesse to North Caucasus. Reportedly, it is investing to the tune of $18 billion to develop seven ski resorts in mountains regions, and three beach developments on Caspian Sea costing $4.6 billion. These developments will lead to promotion of tourism, resulting in revenue generation in the region. This can have a sober impact on extremism and terrorism. Economic development needs to be promoted in conflict region. Second, the radical leaders must be brought to justice. They can be addressed by the government to the effect that they must change their minds and live as peaceful, contributing and democratic citizen of the state. Any deviation from the rule of law must be dealt with stringently. It is indeed difficult for a multiethnic and pluralistic state to succumb to demands of an extremist leader, whose aim is the destruction of the very structure of pluralistic society.

In case of India, last week’s execution of Ajmal Kasab, the lone surviving gunman involved in the 26/11 attack, may bring the legal process to a close and be viewed as a victory of rule of law, but the larger symptoms of extremism still persist. The banned extremist organisations assume new forms to dupe law-making agencies. For instance, the banned Students Islamic Movement of India was later absorbed by another organization named Indian Mujahideen. The organisation, largely drawing its cadres from disgruntled Muslim youth in India, is involved in many violent activities including the blast at German bakery in Pune in 2010. This organisation has links with other extremist organizations like Lashkar-e-Toiba, which openly preaches violence against India and was the mastermind behind the Mumbai attack of 2008. Though Indian government may take the high moral ground in following the procedure established by law in executing Kasab and may showcase the incident to opposition parties, which were long demanding execution of Kasab, as its success as a strong state the threats to India from radicalism remain large.

This concern brings forth the urgency of cooperation between pluralistic societies to tackle this extremism menace. The target is not religion but extremism, which cannot run in salience with the ethos of secularism and pluralism. Resources need to be diverted to address the issue subtly, while at the same time adopting tough postures to dreaded extremists, who have shun grounds for reform of their mind. Cases like Nord-Ost theatre siege of 2002 or Beslan tragedy of 2004, where extremists were unmindful of targeting school going children, or the Mumbai attack of 2008 signal increasing threat from extremist violence that needs to be tackled with all apparatuses, available at the disposal of multiethnic and pluralistic societies.