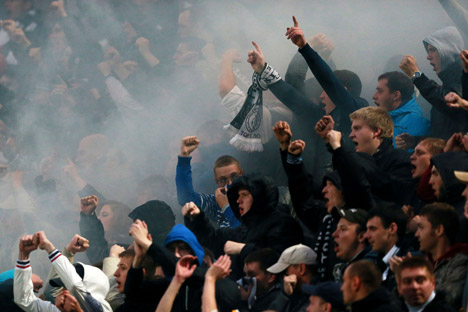 Russian soccer saw nine cases of fan hooliganism with more or less grave consequences over the past year.

The Russian authorities and sports functionaries are wondering again what can stop soccer fan violence after the domestic football public was shocked by yet another high-profile act of hooliganism committed by extremist supporters during a soccer match. Experts are uncertain that tough sanctions and even the adoption of a special law on fans may resolve the problem of violence that has swept Russia’s sports stadiums.

A recent national championship match between Moscow’s Dynamo and St. Petersburg’s Zenit in the Khimki suburb had to be stopped after a fire cracker, hurled from the group of St. Petersburg fans, exploded at the feet of Dynamo’s goalkeeper Anton Shunin. The player suffered eye and ear injuries and had to be taken to hospital.

The Khimki incident was a second over a very brief period of time (six weeks) in which the use of firecrackers by soccer fans disrupted a national championship. At the end of September a national cup encounter between Torpedo and Dynamo had to be stopped for the same reason. The sole difference was the firecrackers did not harm any of the players.

In all, Russian soccer saw nine cases of fan hooliganism with more or less grave consequences over the past year.

The Khimki row spilled over far beyond purely sports bounds. The injury Anton Shunin suffered proved a reason strong enough for opening a criminal case over an act of hooliganism. Recordings retrieved from CCTV cameras were studied and three young women supporters of the Zenit club were detained. Presumably one of them hurled the firecracker onto the pitch that injured Dynamo’s goalkeeper.

The Russian Interior Ministry has drafted a message to the Russian Football Union to demand a probe into the causes that “contribute to a situation in which spectators commit unlawful acts.” The Interior Ministry pointed to the growing rate of such incidents at Russia’s soccer matches and the fact that the rules of the Russian Football Premier league establish the responsibility of organisers for maintaining security at sports competitions. The Interior Ministry argues that the latter often distance themselves from performing their duties and as a matter of fact provide no assistance to the law enforcement agencies.

Prime Minister Dmitry Medvedev on Monday told the government to draft legal amendments for the purpose of preventing such emergencies.

“Such cases should not be treated lightly. In general, those who commit such things deserve going to jail,” Medvedev said at a meeting with deputy prime ministers.

A former general manager of the football club Rostov, Yuri Belous, is quoted by the daily Kommersant as saying that time is ripe for the adoption of a special law on fans. “There have been precedents. Britain has established ideal order. In Britain whole families now go to soccer matches and the sport is developing. But take us – who will invite one’s girlfriend or wife to a soccer match, who will dare go there with children? It’s just unsafe. The more so, since in the run-up to the 2018 Soccer World Cup in Russia some very effective decisions must be taken to prevent the sort of incidents that took place at the Dynamo-Zenit match.”

In the meantime, a bill on fans has been worked on for nearly two years. At the beginning of November it was approved by the Russian government and it is expected to be adopted by the State Duma in the near future. The bill suggests establishing administrative responsibility for the owners and users of sports facilities, who carry out preparations for and hold official sports competitions, in case of the venues of sports events fail to meet the established requirements, and to tighten the rules of fans’ behaviour. For instance, fans will be able to buy tickets to sports events only upon the presentation of identification papers; fines for hooliganism will be very heavy; and very daring escapades will be punishable with administrative arrests up to 15 days and with bans on visits to sports competitions.

The general secretary of Russia’s Trade Unions of Footballers and Coaches, Nikolai Grammatikov, doubts that the law on fans will manage to stem the tide of hooliganism. “All the necessary instruments, both technical and legal, for exposing, preventing and punishing abusers are already in place,” he believes.

Grammatikov described the Khimki soccer row “a natural outcome in the context of the relations that have taken shape between the football authorities and fans over years.” Their attempts to control fans, to “flirt with them” – say, by creating a national society of fans – have had the reverse effect. The fans have gone out of control.

“Time is ripe for tightening responsibility, for exposing crimes against the law and against morality,” the head of the State Duma’s committee for physical culture, sports and youth affairs, Yuri Afonin, is quoted by the daily Komsomolskaya Pravda as saying. “The clubs are to be made to contact their fans in earnest. And hooligans must begin to be punished... With the help of amendments to the Criminal Code.”

Renowned Soviet footballer Yevgeny Lovchev says emotionally, “All clubs should make a decision to play at vacant stadiums and this should continue until these semi-thugs have put their own ranks in order.”