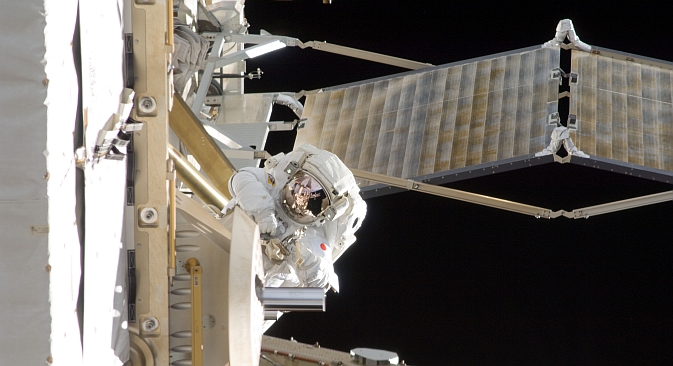 The International Space Station (ISS) was launched 14 years ago, on November 20, 1998. This week can be a good opportunity to contemplate all that has been achieved and discuss the future of this unparalleled manned program in space. Yet its two principal operators - the U.S. and Russia - seem to drag their feet over further collaboration.

The ISS has been on the orbit for just over 5,000 days. More than 200 individuals from 15 countries have been to the station since 1998, when the station’s first module was launched into space.

“The space station program has been in progress for 40 years,” said Sergei Krikalyov, head of the Yuri Gagarin Cosmonaut Training Center. “The first Salyut station was launched in 1971. And the experience we had obtained with the Salyut station was utilized when the Mir station was built. This core module has become the prototype of what would eventually become the International Space Station.”

“We learned so much when we worked at Mir. I cannot fathom how we would have built the International Space Station without all the knowledge we acquired. When that project started, both the Russians and the Americans knew how to cooperate, how our equipment worked together, and even how all of us would have a rest together,” said American astronaut Michael Barratt.

“I believe that space research in the global prospect of outer space exploration must be an international effort,” NASA astronaut Peggy Whitson said. “We are doing something for the benefit of the whole world, as one global community; but, in reality, the most complex thing we have done together is the space station. That is the indisputable proof that together we are stronger.”

Today, despite some minor, routine technical problems and one serious problem caused by the accident of the Russian freighter spacecraft Progress, the manned program is still running. Unfortunately, absence of hardware problems is not enough to consider the International Space Station program a success.

It is difficult to tell who will board the ISS of tomorrow, but this is what will determine the future of the unique international orbital complex.

At the same time, there is little chance that the current lineup of the station’s operation team will continue taking part in the program. The two principal operators of the ISS – Russia and the U.S. – both, for their own reasons, have no interest in further work within their common orbital home.

Furthermore, both Russia and the U.S. are gradually developing new projects for manned flight programs. What is going to replace the ISS?

According to the NASA operations program published on July 5, 2011, the low Earth orbit where the ISS is currently operating will be reserved for private companies that will be bringing tourists, carrying out their research, etc.

The first private spacecraft Dragon has already successfully docked at the ISS. The public funds thus saved will be used to finance outer space research â€’ i.e., the Moon and Mars exploration projects.

Will the U.S. have any motivation to continue its cooperation with Russia within the ISS program? The joint research program is negligible, but what about independent scientific experiments?

Even today their number is insignificant. And now the U.S. is commencing preparation for the Lunar-Mars exploration, which our American partners seem to consider their private business. At this rate, having access to the ISS is not among American priorities, to put it mildly.

On the other hand, the ISS remains an important factor for Russia in the development of its manned space exploration. Loss of the station is literally a critical blow to development of the entire industry.

Nonetheless, in May 2011, the head of the Central Research Institute of Machine Building, Gennady Raikunov, said that the ISS is a closed chapter for Russian science, and that the future of science lies with exploration of the Moon.

“We have hit the limit of the capacity of the ISS and now we need to start thinking about something bigger, something more significant," he said. "We are thinking, theoretically for now, about using our natural satellite – the Moon – as a satellite, where we could set up many more experiments and make use of far more opportunities. These opportunities are absolutely immense.”

It seems that the head of the main Russian space enterprise and member of the ISS program has discarded the station already.

So what awaits the ISS in the end? It seems that this question remains open for now. What is known is that, according to Krikalyov, the International Space Station will continue its orbital work until 2020, at the least.