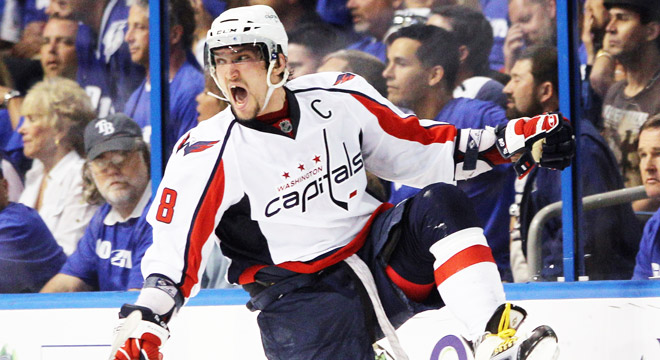 Road to the NHL: From Moscow to Washington

Alexander Ovechkin was born in Moscow into the family of legendary Soviet basketball player Tatyana Ovechkina and Mikhail Ovechkin, who was no stranger to sports either. Mikhail played professional soccer, although not at the top level, and then worked at the Dynamo women’s basketball club, which his wife coached. Alexander took up ice hockey at the age of 9. He was brought to the Dynamo hockey school by his elder brother Mikhail.

Alex Ovechkin was considered a hockey prodigy from a very early age. At 12, he beat Pavel Bure’s record for Moscow championships, with 59 goals. Ovechkin began playing for Dynamo Moscow at the age of 16 and, one year later, became the youngest skater ever to play for the Russian national team, making his debut in the Česká Pojišťovna Cup and scoring a goal.

No one had the slightest doubt that Ovechkin would be the first overall pick in the 2004 NHL Draft. The Florida Panthers actually attempted to draft him in 2003, although he was not 18 and therefore too young to be drafted. The Panthers argued that his birthday was only two days after the cutoff, but the NHL refused to listen and Ovechkin ended up with the Washington Capitals.

After the 2004/05 NHL lockout, during which Ovechkin played for Dynamo and won the Russian Championship, he signed a contract with Avangard Omsk, causing a dispute between the two clubs. The court ruled in favor of Dynamo, but Ovechkin decided instead to leave for the United States

Ovechkin is one of the brightest stars in modern hockey and is generally considered one of the best players – if not the best – in the world. His speed and deadly shots, combined with a magnificent physique and awesome ability to play tough, were ideal for the NHL.

In his first game with the Capitals, Ovechkin scored twice, giving his new American fans a clear picture of what sort of star was playing in the league. During the same first season for the Capitals, he played in Phoenix against the Coyotes (coached by Wayne Gretzky) and scored one of the greatest goals of all time: falling on his back and flipping over, he was able to hook the puck with one hand on his stick over his head and scored. During his first season, he hit the 100-point and 50-goal mark, winning the Calder Memorial Trophy, awarded to the NHL’s best rookie. He achieved the same highs three times more and once scored 65 goals during a single season, setting a new all-time record for NHL left-wingers.

Ovechkin became the first player to capture the Art Ross Trophy (awarded to the player who leads the league in scoring points), the Maurice Richard Trophy (awarded to the leading goal scorer) and the Lester B. Pearson Award (as the top player voted by the NHL Players’ Association); moreover, he did so in a single season – 2007/08.

Ovechkin was named to the NHL First All-Star Team five times, becoming the first player to be thus honored during each of his seasons in the NHL. He ranked first with most shots on goal – 528 – in the 2008/09 NHL season, the Capitals’ record and second-best of all time after Phil Esposito’s impossible record of 550 shots, and was among the NHL’s leading forwards in body checking.

In January 2004, Ovechkin scored four goals against Montreal, including the overtime winner, after Alexei Kovalev accidentally broke his nose with a stick at the start of the game. It was Ovechkin’s fifth nose fracture during his hockey career.

“The things they write about me are more exciting than the real life. For example, Russian papers have turned me into a lady-killer… Once you come to Moscow, go to a party and sit at the same table with someone – they immediately write about Ovechkin’s new affair.”

“I miss the pace of life in Moscow. When I get there, I have no time to rest. I come home, sleep for four hours and get ready for a new battle. Hanging out, going to parties… What else. When you work 24/7 for nine months of the year, what else can you do – come home and watch TV with water and chips?”

“All motorists here are drivers with a capital “D.” In Russia, they would shoot any one of them. You drive on an empty road with two lanes – it is perfectly clear that the left one is for faster vehicles. But they seem to have no idea and keep driving side by side- there is no one ahead and a jam behind them. Why do they drive slowly in the left lane? Who knows? They just do.”

Ovechkin became the only player to be named for the NHL First All-Star Team in each season that All-Star Games were played and was awarded three times for the best penalty shot. During the last few seasons, Ovechkin has been suspended on three occasions for body checking. In 2011, the book “The Ovechkin Project: A Behind-the-Scenes Look at Hockey’s Most Dangerous Player” was published in Canada.

A superstar in hockey and beyond

Alexander’s mother Tatyana Ovechkina is a two-time Olympic champion, whom Sport-Express newspaper called the best playmaker in Soviet/Russian basketball of the 20th century. His father Mikhail played for the Dynamo reserve soccer team. Ovechkin is a Dynamo kid to core – his parents not only both played for Dynamo teams, but also met at the Dynamo metro station.

His older brother Sergei died in a car accident at the age of 25, when Alexander was only 10. Ovechkin does his signature move (he kisses his glove and points to the sky) every time he scores, to salute his brother.

During the 2007/08 season, Ovechkin was reportedly involved in a feud with Evgeni Malkin, because Ovechkin had allegedly punched Malkin’s agent. The two made peace in public during an All-Star Game in 2009.

Ovechkin is a superstar in hockey and beyond. His personal life is a popular subject for discussion in the press and his latest girlfriend is tennis player Maria Kirilenko. In 2011, the Alex Ovechkin wax figure appeared at Madame Tussauds in Washington, DC – he is the first hockey player in the gallery.