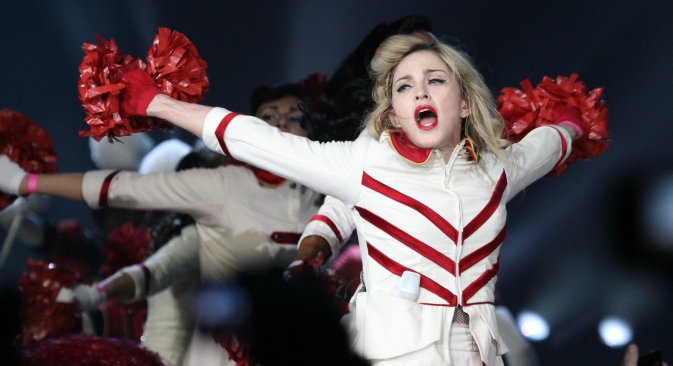 A St. Petersburg court ordered claimants to pay the court fees of the concert’s promoters, while the singer herself did not appear in court.

St. Petersburg’s Moskovsky District Court dismissed the petitions of nine social activists in their attempt to sue the singer Madonna for 333 million rubles ($11 million). The claim was based on allegations that her concert advocated homosexuality.

On top of this, the court ordered the entire sum of court fees incurred by the concert’s promoters be paid by the claimants.

In mid-August 2012, the joint petitioners lodged nine claims of abuse of public morals against the singer and the promoters of her concert in St. Petersburg. The claimants alleged that they had been morally violated by the performer’s remarks in support of the gay and lesbian community during her performance. Each individual claim sought compensation in the form of 37 million rubles.

Before the concert, the singer had also posted remarks on her Facebook page, calling St. Petersburg’s legal statutes against the promotion of homosexuality and pedophilia absurd. During the concert, she asked audience members to support the LGBT movement by wearing pink bracelets that had been distributed to them earlier.

Those accused in the case, along with Madonna herself, were the St. Petersburg Sport and Concert Complex, the venue managers Planeta Plus and the concert’s promoters.

Madonna and her legal counsel were overlooked by the Moskovsky District Court, although they did send a summons to her New York address. According to the RAPSI Russian Legal Information Agency, defendants at the hearing testified that Planeta Plus is a commercial organization that had a contract with Madonna's promoters, and the contract only obliged them to organize the technical side of the show without responsibility for ideological content.

The petitioners rejected the position put forward by the concert organizers. In their opinion, the managers of the St. Petersburg Sport and Concert Venue were legally obliged to accept full responsibility for control of the admissions process, as well as what took place at the venue.

Alexander Nedoshivin, legal counsel for the petitioners, claimed in court that Madonna had promoted anti-Russian values in her concert.

“We are talking about the sullying of propriety and family values, about the violation of social order,” Nedoshivin said. “A great many children saw the concert and its propagandizing of homosexual values. Some went to the concert; others saw it on the internet.”

“Propaganda for homosexuality inevitably leads to a smaller number of children being born. There will be no one to fill jobs. Pensioners will suffer. The country will be plunged into crisis. And I mean a military and political crisis,” Nedoshivin said in a statement to Gazeta.ru.

The accused insisted that they had no role in deciding the concert program. They further stated that they had advised concertgoers the show was for adult audiences, and laws about protecting children from the promotion of gay values did not, therefore, apply. Anyone who chose to wear the pink bracelets did so voluntarily.

The hearing dragged on for over five hours, at the end of which Judge Barkovsky announced that the claim was rejected. The petitioners were ordered to pay the defendants’ legal fees – about 60 thousand rubles (about $ 2,000) for the three accused parties.

The petitioners are now preparing to appeal to the City Court.

“No, of course we’re not happy with the Court’s verdict,” said Darya Dedova, press secretary for one of the petitioners. “We’re going to appeal to the City Court of St. Petersburg. We’re standing firm that a crime was committed ‒ it was real homosexual propaganda aimed at the kids who went to the concert,” Dedova told Kommersant FM Radio.

“The thing is – and it's no secret – that even as we speak, our most valued institution of the family is being assaulted. It’s in crisis. And one of the main reasons is the propaganda of values which contradict our instincts. I’m talking here about the spreading of filth: the spreading of information about sexual deviations, specifically about male buggery and lesbianism,” Dedova said.

The accused, on the other hand, were entirely satisfied with the verdict. “The court did its work with the utmost professionalism,” Artyom Dikarev, counsel for Planeta Plus, told Gazeta.ru. “We’re very happy with the verdict. And we have no plans to appeal, because this verdict upholds the law.”

The story is based on materials from Gazeta.ru, Kommersant and RAPSI News.