Why did Russia snub the East Asia Summit? 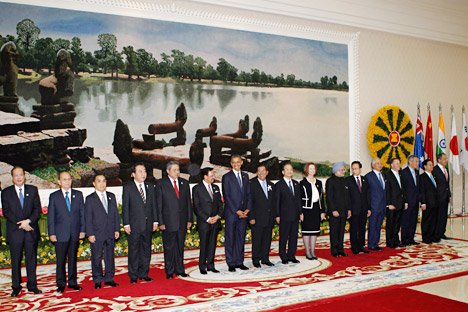 The East Asia Summit (EAS) – an annual forum whose participants represent the 18 most significant states in the Asia-Pacific region. Source: AFP

Questions arise over the fact that neither Russia’s president nor prime minister attended the recently concluded East Asia Summit in Phnom Penh.

As is expected at such summits, each country was represented by its head of state or governmental leader. Well, all except one. The Russian delegation was headed by Foreign Minister Sergei Lavrov. Neither President Vladimir Putin nor Prime Minister Medvedev thought it necessary to turn up in Cambodia. And in fact it is the second time in a row that Russia’s leaders have snubbed the summit; Lavrov also represented Russia at last year’s summit in Bali.

This kind of attitude seems especially puzzling when we consider that Russia lobbied long and loud to be invited to join the EAS. Vladimir Putin participated in the first summit, held in Kuala Lumpur in 2005, as a special guest – but even then Russia didn’t get an invitation card. It was only in 2010 that both Russia and the USA were invited to become fully fledged members of the EAS, and this was puffed up as a victory for Russian foreign policy in Asia. Yet somehow it seems Russia has no interest in partaking fully of the fruits of this victory. With all due respect to the head of Russia’s Foreign Ministry, he is unlikely to be able to fill in for a head of state at an event of this magnitude. This was rapidly brought home by the ASEAN countries, which look on the EAS as their brainchild, and pay special attention to the representation of member countries at the summit.

According to Komersant, ASEAN Secretary-General Surin Pitsuwan could barely conceal his resentment, noting that Moscow could have cooperated with the summit’s members more closely. “For us, Russia is an important and appreciated partner. I’d mention the fact that Russia was given full membership of the EAS simultaneously with the USA as proof of this,” he told Komersant. “This is the second year in a row that we have invited Russia’s leaders, and it is the second year in a row that they have failed to turn up.”

Had Putin travelled to Cambodia, it might have allowed Russia to build on the success of the Vladivostok APEC summit. But no such visit took place.

So why did both Putin and Medvedev not travel to Phnom Penh?

Version 1: The presence of both the “tandem” leaders was needed in Russia, because of some kind of domestic policy issues. But frankly, there is nothing of that nature brewing in Russia at the moment; there is no crisis or emergency, except for heightened measures in the battle against corruption. Of course, it may simply be that we don’t know nearly enough about what’s actually going on in the Kremlin.

Version 2: Rivalries in the Asia-Pacific Region between the USA and China are intensifying, and EAS has turned into a regional stomping-ground for their tug-of-war. Perhaps Russia is trying to lower its presence in the EAS in order to avoid being caught in the potential fallout from discussions about controversial issues at the summit. On the one hand, Russia is obliged to support its “privileged strategic partner” China in its altercations with the USA, and with some other countries in South East Asia as well. But on the other hand, that kind of support would risk compromising relations with Washington, Hanoi and other countries who are not entirely thrilled about an increasingly assertive China. And on top of that, if Moscow moves in lockstep with China on such incendiary issues as the South China Sea, it risks being perceived by Asian countries as China’s lapdog – something which is clearly most undesirable. There are obvious risks at EAS for Russia. However, we believe Russian diplomacy ought to be able to overcome them. Thus, this kind of explanation remains unconvincing.

Version 3: Russia has become disenchanted with EAS as a regional institution. This disenchantment may well arise from the USA’s persistence in running the whole show and to exploit the EAS simply as a tool to do its bidding in the Asia-Pacific Region. Could it be that in Moscow they’ve resolved that if Russia can’t get the top chair at the EAS table, then they’ll put a spoke in America’s wheel by undermining the summit’s significance – and so Russian leaders will simply stay away from it? This, however, leaves us struggling to interpret Lavrov’s words at Phnom Penh: “The East Asia Summit is the pivotal element for us in the formulation of inter-state cooperation in the Asia-Pacific Region. Today, it is the single available mechanism of its kind for top-level dialogue on strategic development questions in the region.”

If you want, you can think up some more versions of your own. But the fact remains: Russia has skipped out of full involvement in the Asia-Pacific region’s most important summit for the second year in a row. This policy of “reduced involvement” is hardly likely to bring Russia any dividends in South East Asia, a region which Moscow trumpets as being of greatest importance to its foreign policy.

Artyom Lukin, Dr of Political Science, Dean of the Faculty of International Relations and Deputy Director of Research at the School of Regional and International Studies, Far-Eastern Federal University (DVFU), Vladivostok, Russia

Sergei Sevastyanov, Dr of Political Science, Professor of the International Relations Faculty, Head of the Laboratory of International Institutes and Multilateral Cooperation of the Asia-Pacific Region, at the School of Regional and International Studies, Far-Eastern Federal University (DVFU), Vladivostok, Russia