Bomber patrols: Why Russia is pulling back

Rakesh Krishnan Simha
The number of Russian long-range bomber patrols has come down as American adventurism in Moscow’s near abroad is put on hold.

After five years of sustained long-range bomber patrols, Russia is easing off the pressure on NATO air defences in the North Atlantic. Strategy Page reports that the number of such patrols dipped to 34 last year from 47 in 2007, when Russia announced it was ramping up patrols to Cold War era levels.

Bomber patrols are conducted by both the United States and Russia (the only countries that have intercontinental range bombers) for a variety of reasons, including maintaining air worthiness, pilot training and morale, probing air defences and maritime reconnaissance. 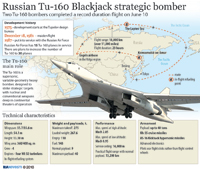 The most spectacular patrols were conducted during the superpower standoff, when dozens of aircraft participated in colossal exercises. It involved a bizarre game of cat and mouse over the North Atlantic. Dozens of Soviet strategic bombers – sometimes accompanied by support fighters, refuelling aircraft and AWACS – from several bases such as Saratov and Ostrov, would come screaming over the Outer Hebrides, just northwest of Scotland.

In response, NATO would scramble fighters – first from Norway, which was the first country in the path of these bombers, and then from England. The Tu-95 Bears and Tu-160 Blackjacks would either turn back after merely probing NATO air defences or fly further out to the open expanse of the ocean. There were occasions when they flew close to American airspace, resulting in fighters being scrambled from the continental United States.

Often the Russian bombers would be back the following day, and again the day after. And then suddenly there would be a pause in the flights, before the ritual was re-enacted all over again. The idea was to keep NATO guessing so it was never quite sure if it was the real thing – a doomsday run aimed at America's heartland.

The aircraft carry dummy missiles and nuclear warheads during training, but in war each bomber is armed with nuclear-tipped cruise missiles. Just a couple dozen of these aircraft could end urban life in the United States, without approaching closer than 2000 km from American shores. The Arctic route dramatically reduced the time required for these aircraft to fly from Russia to the Atlantic from where they could fire their missiles unopposed by American air defence. That’s not counting the Bears, Blackjacks and Backfires in the Pacific, where they are known to buzz Japan and the American military base in Guam.

Fearful of Murphy’s Law the two sides decided to curb these aggressive manoeuvres and declared an unofficial moratorium on these flights. However, bomber patrols returned in 2008 as a Russian strategic countermove to the unprecedented concentration of US and NATO warships in the Black Sea – regarded by Russia as a private lake for 250 years since the time of Catherine the Great.

Days after the Russians took apart Georgia’s American-backed military, Moscow launched its most impactful patrol yet. On September 10, 2008 at a strategic air base in Saratov, around 1000 km south of Moscow, Dmitry Kostyunin, deputy commander of the Russian Air Force’s long range bomber division, held a secret briefing for his elite crews. After the briefing, two Russian Tupolev Tu-160 Blackjack supersonic bombers took off on a mission that was known only to a select few. As usual, NATO aircraft shadowed the aircraft over Norway and Iceland, but soon realised they couldn’t keep up.

It was anything but usual, as the Blackjacks flew non-stop for over 15 hours, in the process setting a world record by accepting 25 tonnes of fuel during aerial refuelling. Finally, late in the night the Russian jets landed at the Libertador air base in Venezuela, where President Hugo Chavez personally welcomed them. “The Yankee hegemony is finished,” he said on national television.

For once, the “Yankees” weren’t calling it yet another rant by the fiercely anti-American Chavez. For, the Tu-160s are strategic game-changers. Five times heavier than the largest American bomber, the B-52 Stratofortress, the Blackjack is a formidable nuclear bomber. Capable of bursts of flight at Mach 2, or 2250 kmph, it can carry stand-off, nuclear-capable X-555 cruise missiles with a range of 2,000 miles.

Joint development the way ahead for Russia-India military ties

The upshot: even a couple of Tu-160 aircraft – with 40,000 kg of munitions on board – could loiter safely 24/7 in international air space and still have the capability to hit multiple targets across the US. Historically, the main US air and missile defence forces orientated towards the North Pole – as the shortest route from Russia to the United States is via the Arctic. The southern direction is much less protected, and the emergence of a potential threat from the Caribbean and the Gulf of Mexico gave a serious headache to the Pentagon brass.

Sending the beautiful, gigantic aircraft to Venezuela marked the most aggressive strategic challenge the Kremlin had laid down in the western hemisphere in at least a quarter of a century.

The US, which is deploying an anti-missile system in eastern Europe, now has to deal with the risk posed by Russian combat aircraft appearing in its own backyard. Moscow-based military commentator Ilya Kramnik wrote in a column for UPI: “Geopolitically, this step is designed to remind Washington of the need to listen to what other countries have to say. After all, if the US is deploying more and more military sites near the Russian borders, it would be strange not to expect an adequate response from Moscow. The landing of Tu-160 bombers capable of carrying considerable nuclear ordnance shows that such a response is possible.”

Politics may or may not have something to do with the Russian hazing of Britain over a diplomatic tit-for-tat. On the night of July 7, 2007 two Russian Tu-95 bombers briefly entered British air space. Even as the British were recovering from the shock, three hours later two Tu-160s came close to the edge of British air space. The incidents occurred amid high tensions between Britain and Russia, as each country ordered the expulsion of four diplomats from the other side. Britain got the message.

With American adventurism in eastern Europe and Caucasus on hold for the moment, Russia is giving the bomber pilots a break. Under United States president Barack Obama things have improved considerably since George Bush, whose messianic zeal threatened to freeze relations.

Russia's 2000 Military Doctrine and subsequent documents set forth a de-escalation strategy, which stressed on training rather than permanent patrols. “Our pilots are restless. We have aircraft, but they do not fly,” Putin said while announcing Russia’s reinstating of the patrols. Izvestia quoted Commander of Long-Range Aviation Major-General Pavel Androsov as saying that Russian heavy bombers would be flying "air patrols" rather than "combat duty" missions.

Seeking to allay the "unhealthy sensationalism" about these flights, Russia's Independent Military Review says the new policy is not close to the Cold War pattern, when Soviet and American heavy bombers, often with nuclear weapons, maintained an almost permanent presence in the air. It agrees this is an opportunity for heavy bomber crews to restore qualifications that had been lost in previous years.

Meanwhile, the strategic flights continue over the Atlantic, Arctic and the Pacific oceans. The good natured Kostyunin, who once flew strategic aircraft from the Baltics, says when Russian bomber pilots are intercepted by fighter jets, the feeling is one of camaraderie. “I think the European fighter jets are also happy. The young pilots can see our planes, see how beautiful they are.”

The mood at the Saratov base may be upbeat, but on the other side the watchword is caution. At Norway’s Bodoe air base, above the Arctic Circle, a young Norwegian captain told the media he is one of the fighter pilots who is regularly sent up to face-off with the Russians. “We avoid any provocation,” he insisted. “We come from the back and we keep our distance all the time, no less than 500 feet from them. They proceed with their mission normally. They don't do anything special just because we’re there.”

Kostyunin signed off: “The Blackjacks are a symbol of power but also a symbol of goodwill. The more you know about us, the more you’ll love and respect us.”