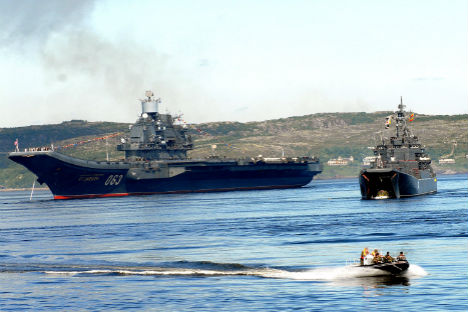 A new aircraft carrier will combine the properties of a command and control vessel with that of a powerful defensive ship.

Russia intends to strengthen its maritime security with a heavy air-capable new generation cruiser, which is expected to be put to use by the Russian Navy in 2020.

The new aircraft carrier will combine the properties of a command and control vessel with that of a powerful defensive ship. It is also planned to fit up this cruiser with the most advanced equipment that has no analogues in the world.

The main purpose of such a ship is to deliver strikes at targets in the air, on water, on land and even in space. The latter task will be achieved if the ship works in a tandem with a group of orbital facilities.

At present, Russia has only one heavy air-capable cruiser, called Admiral Kuznetsov, which is drawing its duty in Russia’s northern waters. There are plans to modernise it by 2020, but Russian Navy commanders have long been saying that Russia needs more heavy cruisers as well.

In an interview with the Voice of Russia, analyst Ivan Konovalov said: “There have been certain misunderstandings between the Russian United Shipbuilding Corporation and the Defence Ministry concerning this issue. But when the country’s top leaders announced that Russia needs new aircraft carriers, there are no more misunderstandings. The Russian navy has 4 subdivisions - thus, it is planned that Russia will have 4 battle groups headed by aircraft carriers.”

These groups will consist of the aircraft carrier itself, at least 6 more other battle ships and 1 or 2 submarines.

On November 23, the Russian Navy’s Commander-in-Chief Admiral Victor Chirkov said that works on the project of the new aircraft carrier should be finished by 2020. Money on this project has already been allocated.

The conditions which the commanders have put forward for the new ship is that it should spend a very long time without being reloaded with any energy from outside (it is planned that this will be reached by equipping the ship with nuclear reactors), be workable at any weather and have a high combat viability.

The editor-in-chief of the Russian magazine “Export Vooruzheniy” (Export of Arms) Andrey Florov says: “For Russia, having such a cruiser would mean more than just having another military ship. If Russia has it, it will be able to claim for the status of a superpower from the point of view of navy – although, of course, the cruiser will be not only a symbol of power, but be used for practical aims as well. It will defend Russian submarines and land-based marines from air attacks.”

The displacement of the new aircraft carrier will be more than 50,000 tonnes, which is bigger than that of the Admiral Kuznetsov but smaller than that of its modern US analogues. It will be able to take about 80 airplanes on its deck.