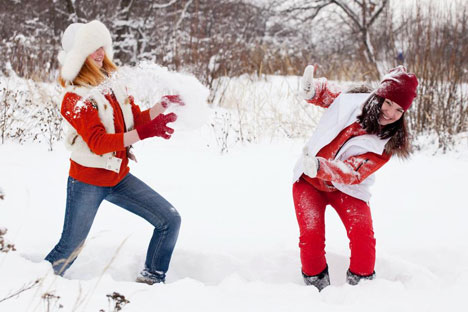 Russian hearts are warmed by the frost. Source: Lori/Legion Media

The last few winters in Moscow have delighted residents with plenty of snow, glorious sunshine and Jack Frost nipping at their nose. Everything is in place to make the most of the leisure opportunities the season has to offer!

The most glamorous ice your skates can slice has for the past few years been in the GUM-Katok ice-rink, which is located right on Red Square. Even so, a major new contender appeared last year – the ice rink in Gorky Park, the largest in Europe. The 18,000 square metres of ice are divided up into different areas; one for kids, another for ice hockey and a third for ice dancing. There are cafes scattered around the rink, where you can get served without even taking your skates off. The rinks in Gorky Park and on Red Square maintain their operation – even during possible thaws – up to early March.

Related: Take a spin on the ice

The abundance of snow last year that both delighted kids and riled city street-clearing services – just as the Urals-born new mayor was taking up his job – prompted fresh interest in cross-country skiing. If this year’s snow turns out as good as last year’s, then ski-trails will be laid out in all of Moscow’s parks. Traditionally, the boldest ski-trail is through the Aleshkinsky Woods at Tushino, which has been set up according to professional standards.

Related: Take a virtual trip to the museum

From 23 November, the Tretyakov Gallery will be presenting a large new exhibition of Russian graphic print design from the mid-19th century to the early 20th century, where examples of all the different art movements of the time – from “the Wanderers” through to “World of Art” and “Turquoise Rose” – will be shown. It’s also worth popping in to the Museum of Private Collections of the Pushkin Fine Arts Museum. From 13 January, there will be an exhibition of etchings and drawings by Old Dutch Masters, including 50 of Rembrandt’s etchings. The exhibition is taken from the collection of the Mosolov family, prominent Muscovite art collectors.

Related: Why I gave up ballet for sheer bliss of snowboarding

If summer and early autumn are the time for high-decibel pop and rock concert tours, then December and January are the season for enjoying classical music. On 29 and 31 December, the famous diva Ljuba Kazarnovskaya will be giving concerts in the Great Hall of the Moscow Conservatoire.  On 29 December, Vladimir Spivakov, Daniel Kramer and the State Chamber Orchestra the Virtuosos of Moscow orchestra will be presenting the “From Mozart to Jazz” programme at the Tchaikovsky Concert Hall, while on 31 December Yuri Bashmet will be performing his traditional New Year concert. December at the Bolshoi Theatre sees one of the most anticipated premieres of the season, La Traviata, staged by Francesca Zambella. On 31 December, the Bolshoi will, as ever, present the ballet Swan Lake. The main role will be played by Nikolai Tsiskaridze, who celebrates his birthday on New Year’s Eve.

Take a Wander through the Christmas Bazaars

This European festivity has now reached Moscow. They’re already up and running by the end of November; on 24 November there is a Christmas Fare held at the German Embassy, with gingerbread houses, musical boxes, nutcrackers... the classic line-up! Tickets to the event will be entered into a lottery, with many different prizes to be won. The baton is then taken up by St Andrew’s Anglican Church, which has a Christmas Bazaar on 1 December, the first day of Advent. Every weekend, there will be a seasonal market around the ice-rink, offering Christmas decorations, toys, hot Belgian waffles, mulled wine and all the other goodies associated with the festive season. The pre-holiday shenanigans come to an end on 22–23 December, when the magazine Seasons holds its traditional Christmas Fare. Here you can find seasonal gifts, buy decorations for your Christmas tree, try some seasonal sweets, ride on some enormous swings, go ice-skating and watch a re-enactment of the Nativity.