A leap of faith in India-China ties 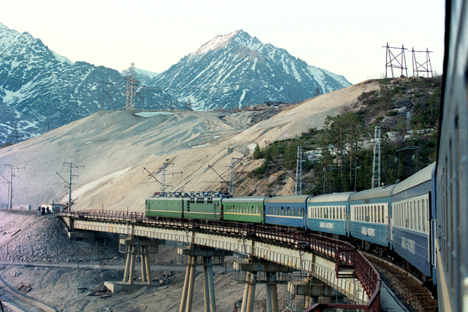 The Indian side envisages three major areas of collaboration with China – development of high-speed rail networks, expansion of heavy freight haulage and the upgrading of major railway stations. Source: ITAR-TASS

In many ways, 2012 promises to stand out as the year when the India-China discourses changed course in a historical sense.

India is an ancient civilization, which is why probably it takes so much time for the wheel of life to turn one full circle. Six years ago in August 2006, amidst much brouhaha, New Delhi refused to approve the award of a contract to a consortium consisting of two Chinese companies – Kaidi Electric Power Company and China Harbour Engineering Company – and their Mumbai-based Indian partner company Zoom Developers for the development of an international trans-shipment terminal of the Vizhinjam port in the southern state of Kerala.

The project is of extreme importance not only for the development of a sizeable region of Kerala but it also has great techno-economic potential for the national economy. The Vizhinjam Terminal is expected to substantially cut down 11.4 percent of the freight costs of Indian exporters. The port has huge advantages since it needs no dredging (unlike other Indian ports) with a natural depth of 24 metres, which is a fantastic asset by world standards.

The Chinese bid was by far the most competitive. However, the Neanderthal men presiding over national security in Delhi at that point in time said ‘Nyet.’ How preposterous that Chinese companies could be allowed to enter India’s port sector! This was the refrain. They rudely ignored a demarche made by the veteran leader from Kerala, A.K. Antony (presently India’s Defence Minister) not to hold up the Chinese tie-up for the project. Antony was quoted as saying, “The Vizhinjam port project with foreign investment and technology participation is the best thing to happen to the country's port sector. All the political parties in Kerala have now requested the Central government to approve the project fast.”

He was spot on. Even Antony’s political adversaries, the notorious communists, endorsed his plea. The leader of the Communist Party of India (Marxist) Prakash Karat said, “The tenders had been cleared, the prime minister was expected to lay the foundation stone and the work was about to begin. But suddenly they found that Chinese companies could not be given security clearance.”

“Are the US companies, which have projects in Pakistan, disallowed to take up port projects in India? If you are allowing other countries to bid, why stop China? If American companies can take up work, both, in India and Pakistan why bar the Chinese companies?” Karat asked in exasperation. But, the Neanderthal men remained unmoved, insisting that their ‘Nyet’ is always a ‘Nyet’.

Alas, some things take time. While the officials who stopped the Chinese consortium moved on in their scintillating careers, Vizhinjam project still languishes in the backwaters, struggling to take off.

Therefore, suffice to say, it is nothing short of a leap of faith on the part of the Indian leadership (which was the same, incidentally, in 2006) to choreograph with China this week a joint economic strategy for increasing trade and investment and ensuring the economic growth of the two countries amid the global economic slowdown. The setting was the second session of the India-China Strategic Economic Dialogue, which took place in New Delhi on Monday (November 26). The strategic dialogue forum decided to significantly open up the opportunities for Chinese investment in India, which the Indian leadership estimates could be one of the most feasible ways in which to offset the balance of trade between the two countries that is currently skewed in China’s favour.

However, the mother of all ironies is that the flagship of the Sino-Indian economic strategy is a Memorandum of Understanding signed between the Indian Railways and its Chinese counterpart. The Indian side envisages three major areas of collaboration with China – development of high-speed rail networks, expansion of heavy freight haulage and the upgrading of major railway stations. Indeed, New Delhi trusts that China has the big money, the advanced technology, the requisite expertise and the vast experience that is needed to inject new life into India’s dilapidated railway system (which is touted as the largest network in the world). After all, China is offering capital and technology to build high-speed train networks in the United States, as an Indian commentator slyly pointed out.

The decision to bring in the Chinese railways to invest in India obviously carries the imprimatur of Prime Minister Manmohan Singh. It signifies a leap of faith that has immense significance for the India-China relationship and the Asian power dynamic as a whole. So far, India’s invitation to China to invest in India’s infrastructure sector has remained an expression of hope. Now it is poised to move to the practical plane.

Equally, the private sector in India has been China’s pre-eminent economic interlocutor so far. Now, a major Indian public sector undertaking is entering the fray. Indeed, the business spin off is expected to be massive once the cooperation begins to gain traction. (India has an estimated railway network of 65000 kilometres.) The amazing part is that New Delhi knows fully well that China’s railway companies are inextricably linked to that country’s national security – just as it is in India – and that doesn’t deter the policymakers. Obviously, the Neanderthal men have given way or been cast aside – depending on how one looks at the mysterious ways in which Manmohan Singh’s mind works in his obsessive drive to modernize India.

This brings us to an intriguing aspect of the India-China discourse. The backbone of the Indian economy is, and for a very long time will continue to be, the railway system. In the Indian reality, it also happens to be the one sphere of economic activity where so many crucial templates of national development converge – industrialisation, employment, environment, urbanization, inclusive development, national integration, national security, etc. That a vital infrastructure sector which impacts on national security has been chosen as the area of cooperation signifies a certain maturing of the India-China political discourse.

New Delhi seems to be finally grasping the intuitive truth that deeper economic collaboration with Beijing can unlock the door of political parity. The cooperation in the field of railways is not a flash in the pan. In many ways, 2012 promises to stand out as the year when the India-China discourses changed course in a historical sense. The Indian policymakers are at their creative best in a very long time, steering the India-China discourse with its complex interplay of competition and cooperation, interlaced with differences and disputes, at a near-optimal level through an extremely fluid corridor of time in the international system.

India’s National Security Advisor Shivshankar Menon said earlier this week that the two countries have “made progress in dealing with” the border dispute and that they are in the process of agreeing on a framework to reach a settlement.

Menon said, “We are in the process of agreeing on a framework to settle the boundary and the next step, hopefully the third stage, is to actually agree on a boundary. Right now, we are at the second stage.” Menon is due to travel to Beijing next month for the next round of talks on the border dispute with his counterpart Dai Bingguo.