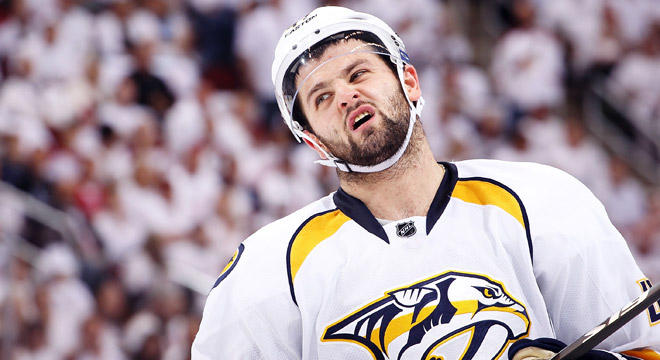 Adored by the fans

Road to the NHL: From Nizhny Tagil to Nashville

Alexander Radulov was born and grew up in Nizhny Tagil. He was an active child and his parents decided to enroll him in an ice hockey school. Radulov was greatly influenced by his elder brother, Igor, who played professional hockey for the Ufa team Salavat Yulayev. Alexander Radulov’s first coach was Alexander Veingardt, who spotted the boy’s huge potential.

At 16, Radulov’s styleo of play was noticed by Moscow Dynamo. Radulov had been playing for Dynamo’s second team for two years. He played only one match in the 2003/04 season in the Russian Superleague (RSL). Yet, during that season, Radulov made a big splash in the second-highest league in Russian hockey, when he was on loan from Dynamo to THK Tver. He scored 31 goals in 42 games, and the young star was adored by the fans in Tver.

Radulov did not stay in Russia long. In the summer of 2004, he was chosen 15th in the NHL Draft by Nashville. He was the third Russian player in that draft, after mega-stars Alexander Ovechkin and Evgeni Malkin. Two months before, Radulov had won the world junior championship playing for the Russian national team, racking up the third-largest number of goals after Malkin and Roman Voloshenko.

Radulov was still two years away from playing in Nashville. He spent those years in the Quebec Major Junior Hockey League (QMJHL), quickly making his mark and becoming one of the key players in the Quebec Remparts. The following year, he swept the boards of individual and team prizes as the best player and the best scorer (tying the results achieved by Sidney Crosby the year before).

The following season, he made up one of the Canadian Hockey League’s strongest attack duets with Angelo Esposito. On Oct. 28, 2005, he set the club’s record by scoring six goals and winning seven points in a match against the Drammondville Voltigeurs (11:3). On March 19, 2006, he bested his own record, scoring 7 goals and 4 assists in a match against Rimouski Oceanic (16:3). He became the finalist in the play-off (President’s Cup) and holder of the Memorial Cup.

In the 2005/06 season, he set yet another club record, winning points in 50 matches in a row, the second-best result in the League’s history after Mario Lemieux (62).

Scoring a goal within 6 seconds

Radulov made his debut in the Nashville main team on Oct. 21, 2006. But that season the Predators only managed to make it to the first play-off round. Nashville’s only star in 2006/07 was its coach Barry Trotz, while all the others, from forward Jean-Pierre Dumont and center Jason Arnott to young defenders Shea Weber and Ryan Suter, were either thought to be fading veterans with their best behind them or young talents about to be grabbed by top clubs. Radulov stood out from the crowd and won very good press. The teenager was much sought after by journalists. In his first NHL season, Radulov played 64 matches, winning 37 points (18+19). While the press reports were positive, Radulov was headed toward a serious conflict with Coach Trotz. In the summer of 2008, Radulov left the U.S. and signed a contract with Salavat Yulayev of Ufa.

NHL fans immediately accused Radulov of defecting, while patriots cited Radulov’s squeaky-clean love of the Russian ice and dislike of foreign ice. Both sides were grossly exaggerating, but the move had repercussions for both the NHL and KHL. Before Radulov, no NHL team leader with a contract in his hands had ever dared leave for another league without permission. Theoretically, any number of sanctions could have been applied to Radulov, but the three seasons that followed have been the best in the player’s career so far.

In the 2008 World Championship, Radulov won gold medals as a member of the Russia team. The following year, during the World Championship in Switzerland, Radulov clinched Russia’s victory over Canada by scoring a goal. In the 2009/10 season, Radulov was declared the most valuable player in the regular KHL season. With 24 goals and 39 assists, he was close to winning the Gagarin Cup, but the Ufa team was stopped by the AK Bars of Kazan. Radulov had his revenge a year later. In the 2010/2011 season, he made 60 assists (KHL record) and scored 20 goals.

Salavat beat AK Bars in the quarterfinals. In the semifinals, Radulov’s team managed to outplay Metallurg Magnitogorsk only in the seventh match. In the final series with Atlant, Radulov was the best player, winning his first Gagarin Cup and the Best Striker Prize.

“They have absolutely different hockey across the ocean. It cannot be compared to the KHL. We have different rinks. There, it’s more dynamic. That changes the game. You cannot act wide; there is no time to handle the puck. This is bad for some and good for others.”

“Malkin is an excellent player, just excellent. Last season he had an injury and he missed many games. But he is really on fire this season. A fantastic hockey player.”

About his stats “I don’t follow personal statistics. I finish a match and I try to forget it. Tomorrow will be another day.”

During that season, Radulov won many individual prizes and scored the fastest goal in the history of Russian hockey, within 6 seconds (in a Salavat Yulayev match versus Ugra).

Radulov also had a very successful 2011/12 season. With 25 goals and 38 assists in 50 matches, Radulov lodged a serious claim for being the player of the year, but Salavat dropped out of the Gagarin Cup race at the first playoff stage. After that failure, rumors began circulating that Radulov might return to the NHL. A week later, Radulov resigned from the Russian club of his own accord, thus losing his KHL salary. Yet the Ufa club retained its right to the player. Starting from July 1, he will be a free agent at the NHL and there will be no shortage of teams wanting him.

Radulov has  appeared in a clip with the popular Russian singer Nyusha and posed for pictures for the Russian edition of Playboy. Many media outlets claim that the 26-year-old hockey player is involved with Russian TV presenter Valeria Kudryavtseva. His favorite food is steak; his favorite place to vacation is Italy. His favorite actor is Al Pacino and his favorite film, naturally, Scarface. Radulov has been a fan of the American band Metallica since childhood.