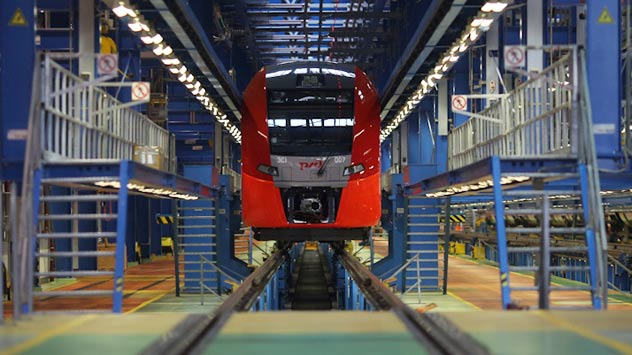 The proposed corridor is meant to serve as a corridor of peace as a bulk of the trading in the region would be handled by a well established railway link that starts from India and eventually connects to Russia via Iran.

Indian Foreign Secretary Ranjan Mathai put his finger last week on the most under-performing aspect of Indo-Russian bilateral relations: trade. Mathai described the laggard much- below potential bilateral trade (currently pegged at just $10 billion) as “a major disappointment” but also proffered an effective solution: The North-South Transport Corridor, which can link Mumbai to St. Petersburg; with a 40 percent cut in cost and time.

Underdeveloped trade ties must be of equal concern to the Russians as well. Much smaller countries have double or more than double annual trade with India as compared to the Indo-Russian trade. In 2011-12, India’s trade with South Korea touched $22 billion (target $ 40 billion by 2015), while with Singapore it was almost $22 billion (target $50 billion). With Japan, the bilateral trade became a major victim of the March 2011 tsunami and knocked up a figure of just about $15 billion, yet the two sides have fixed the trade target at $25 billion by 2015.

While addressing a select gathering on the occasion of the sixth Indo-Russian dialogue promoted by the Observer Research Foundation and Russkiy Mir, Mathai articulated his concerns on the inability of Indo-Russian trade and economic ties, led by the two countries’ private players. He said: “The fact that our private sectors are still not enthused enough to make major forays into each other’s trillion plus dollar economies, defies reason. The Governments keep trying to create the right enabling conditions.”

In terms of logistics the Government of India has been vigorously pursuing the idea of streamlining the North-South Trade Corridor, Mathai pointed out.

The North–South Transport Corridor is the route involving moving goods from India to Europe through Central Asia, the Caucasus, and Russia. The multi-modal route involves transportation of merchandise through ship, rail, and road route for moving freight from South Asia to Europe. From Iran, the freight moves by ship across the Caspian Sea or by truck or rail to Southern Russia. From there, the goods are transported by truck or rail along the Volga River through Moscow to Northern Europe. In 2001, Russia, Iran, and India signed an agreement to further develop the route.

The main reason why India lapped up this project was it opened a very important window for boosting trade relations between South Asia and Central Asia. One of the important signposts of this project was signing of a Memorandum of Understanding between Indian and Iran over the development of port of Chah Bahar port and transhipment facility at Bandar Abbas, Iran.

JNPT Mumbai is the starting point of the International North–South Transport Corridor which is meant to reach Bandar Abbas near Straits of Hormuz from where the goods would be carried to Russia by rail through a specially developed railway link between Iran, Turkmenistan, Kazakhstan. The project ensured all-round development of Afghanistan too as there is well established surface route from Chah Bahar port to Zarang Lake on the border of Afghanistan.

In other words, the proposed transport corridor is meant to serve as a corridor of peace as a bulk of the trading in the region would be handled by a well established railway link that starts from India and eventually connects to Russia, meandering through Pakistan, Iran, Afghanistan, Turkmenistan and Kazakhstan. Even China would have benefited from this corridor of peace and opportunities but alas this has not happened yet.

There is plenty of scope for innovative IT

As Mathai pointed out, India and Russia have already identified a few sunrise industries to focus on, including pharmaceuticals, information technology and space-based navigation systems for civilian purposes.

“We are pushing for a joint investment fund that could promote infrastructure projects in both countries. The Inter-Governmental Commission on Trade and Economic Cooperation as well as the B2B India-Russia Trade Forum, which meet annually, have been making efforts to come up with such creative solutions to meet the increasingly stiff task of raising our trade levels from the current around $10 billion to $20 billion by 2015,” Mathai said.

Another very promising sector of cooperation between India and Russia where the two sides are constantly making incremental but slow progress, as flagged by Mathai, is the hydrocarbon sector, where immense potential lies buried literally under the ground. Indian companies have proven their technical competencies in the past and are currently operating in many corners of the world. With over a decade of joint operations, Indian oil and gas entities are ever keen to explore Russia’s vast energy resources which is bound to prove vital for both sides’ future energy supply security, and equally, for Russia’s energy demand security.

Another promising area of Indo-Russian cooperation from the Indian stand point is using Russia’s vast experience and expertise for better understanding of geology, the development of gas reserves in India, and as a partner for pipeline development. India needs to give urgent importance to our own energy sources. The good thing is that India is talking to other countries about new possibilities of reserves in the Indian Ocean basins and research on exploration of gas hydrates.

Mathai’s relevant remark in this context is as below. “We need to work closely together with our Russian friends to push some major investment projects. While we seek to constructively engage on some investment episodes which have become irritants, we must ensure that they do not become deterrents for further forays.”

Also, India needs to look beyond and capitalise on the opportunities which will come with Russia’s accession to World Trade Organization (WTO) and by the expansion of the Eurasian Economic space, a vision which is close to the heart of Russian President Vladimir Putin himself.

A potential game changer in this context would definitely be a Comprehensive Economic Cooperation Agreement (CECA) with the Customs Union between Russia, Kazakhstan and Belarus. Mathai said India intends to start “focused discussions” with all relevant players much too soon.

All this is expected to be high on the agenda of President Putin during his talks with the Indian leadership in New Delhi on December 24.