The advance of political Islam 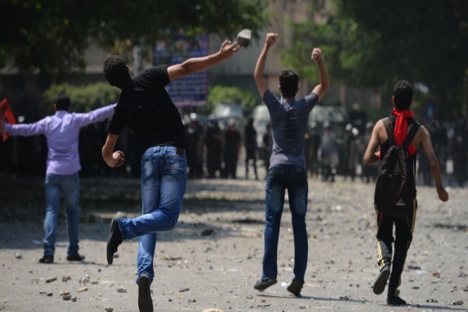 The Arab Spring moves forward, engulfing one country after another, even though the overthrow of authoritarian regimes that brings political Islam to domination instead of prompting Western-type democratization has bogged down in the Syrian Arab Repu

The situation in the Middle Eastern theater of operations is, as usual, far from optimistic.

But political optimism hardly is an appropriate category for the region that at the end of the second decade of the XXI century has to go through changes that are as rapid and as extensive as the changes that Europe experienced in the late 1920s.

The Arab Spring moves forward, engulfing one country after another, even though the overthrow of authoritarian regimes that brings political Islam to domination instead of prompting Western-type democratization has bogged down in the Syrian Arab Republic (SAR). Over the one and a half years, the civil war in the country has grown into a conflict between ethno-confessional communities with active participation of foreign players, each of whom pursues their own objectives. The main facilitators and sponsors of the war are Qatar, Turkey and Saudi Arabia, supported by the West.

Syria gradually turns into the primary target of international jihad volunteers which, should Assad’s government fall, makes it more than likely that the country either ends up as a failed state or collapses. Formation of yet another united opposition group in Doha is the demonstration of the alliance between Qatar, Turkey, the US and France with the Kingdom of Saudi Arabia (KSA) playing an independent role supporting radical Salafi groups in Syria. No compromise with the acting regime is acceptable for the opposing sides. Any projects, including Russian projects, aimed to end the conflict in the SAR will be decisively blocked. The visit by the head of the Russian Ministry of Foreign Affairs Sergei Lavrov to the Arabian Peninsula has shown that the local players have no desire whatsoever not only to consider the Russian position regarding Syria, but also to discuss it with Moscow in any constructive way at all.

This shows the efficiency of the tactics adopted by Russia and China, who in the UN Security Council keep blocking the resolution that would enable the intervention following the Libyan scenario. It wouldn’t rule out the possibility of the creation of no-flight zones, formation of territory enclaves on the border with Turkey and beyond the control of Damascus, where a revolutionary government would be formed as the alternative to the Assad’s government, and participation of special assault groups in operations against the Syrian army and security forces without facilitation from the UN.

The renaissance of political Islam in the Middle East is fraught with its possible spread outside the region.

For instance, there is an extremely high chance that the Central-Asian Spring could be organized in Uzbekistan and Kazakhstan during the imminent change of their governmental generations, launched from Kyrgyzstan and Tajikistan. That would mean expansion of “democratic Islamization” to the Chinese XUAR (Xinjiang Uyghur Autonomous Region), Russian Volga Region and the Caspian Sea Region.

Technically, there is nothing impossible about organizing riots and provoking conflicts between Islamists and local authorities in the internal regions of Russia and on the north-western border of the PRC under the banners of freedom of religion and social justice and with the support of the “global community”. Salafi groups in the Central Asia and Russia and the Uyghur separatists in China can be easily recruited to carry out this scenario given that they receive their financing and support from the same powerhouses that support the development of the Arab Spring.

Russia has a fairly good chance of dealing with the Islamist menace at its own territory, even though the operational situation in the North Caucasus (particularly in Dagestan, and in Tatarstan and Bashkortostan) shows that there’s no room for complacency. The counterterrorist operation in Kazan has demonstrated how deep-rooted the problem is. Cooperation with Central Asian governments and the government of China is especially important in light of the approaching withdrawal of the US occupational troops (and smaller units of other countries of the coalition) from Afghanistan.

It should be noted that Russia’s opportunities to influence the countries that make the biggest contribution to the expansion of the Arab Spring and the political Islamic renaissance are rather limited, if existent at all, at least in their own territory. The only country in the region interested in negotiating with Russia due to its economic interests is Turkey – and it holds these negotiations on its own conditions and by its own rules, balancing between the West, the Arab countries, China and Russia.

The Gulf monarchies demonstrate their growing hostility towards Moscow, the rhetoric of their print and digital media is reminiscent of the times of the Afghan war in the 80s, the only difference being that they used to fear the Soviet Union, while Russia they choose to ignore.

The Islamic Republic of Iran (IRI) feels no gratitude to Russia for the many years of support in the UN or for finishing the Bushehr Nuclear Power Plant despite the international pressure, even though the Iranian lobby in Moscow keeps trying to find support in Russia in its confrontation with the West. At the same time, contrary to the expectations of the proponents of the Iranian-Russian cooperation, the IRI keeps insisting on redistribution of the spheres of influence in the Caspian Sea Region, not to mention the suit against Russia it filed to the International Court of Arbitration for cancelled shipment of S-300 complexes after imposition of international sanctions against Iran. Given that Gazprom feels the ever-growing pressure in the European market from Qatar and Algeria whose gas supply is expected to reduce EU’s energy dependence on Russia, the oil and gas restrictions imposed on the IRI are not a big problem for Russia – quite the contrary, actually.