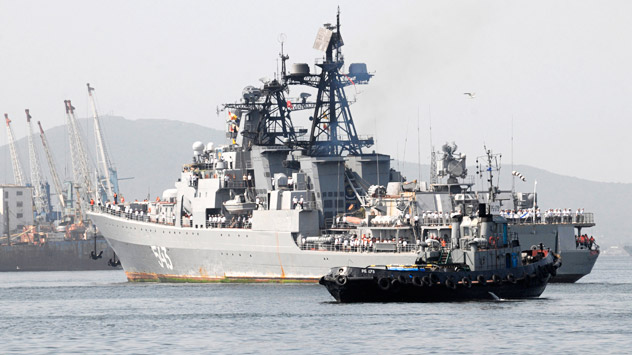 A squadron of the Russian Pacific Fleet to take part in the Indra naval exercises with the Indian Navy.

As the sunset gave way to twilight on a picture-perfect November evening in Mumbai’s naval dockyard, a group of sailors and officers from the Russian Pacific Fleet rehearsed the drill to welcome Alexander Kadakin, Russia’s ambassador to India. A few young cadets, who were not part of the protocol, spoke quietly about not being able to go out into the city and take in its sights and sounds. The sailors were not on a pleasure cruise and the strictest standards of discipline, which the Vladivostok-based Pacific Fleet is famous for, demanded that the crew to be both mentally and physically prepared for a long-term mission. These are crewmembers of the Udaloy class destroyer Marshal Shaposhnikov, which is on an official visit to the Mumbai port for phase-1 of the “Indra” naval exercises with the Indian Navy.

There is a particular degree of cordiality and warmth in the relationship between the Russian and Indian navies, with several Indian naval personnel posted in Severodvinsk, which houses the Sevmash shipyard. After a let-up in exchanges between the maritime powers, the latest round of Indra exercises promise to be a boost for extended naval cooperation. The Indian Navy’s INS Mysore destroyer and the Tabar class guided missile frigate will join the Marshal Shaposhnikov, the Irkut tanker and the Alatau rescue tug boat for the Indra exercises on the waters off India’s financial capital.

The words “Pacific Fleet” ring a bell in India, considering the role the Vladivostok-based fleet played in the 1971 Bangladesh War of Independence by keeping the American Seventh Fleet out of Indian waters. “Friendship between the fleets of India and Russia is very deep-rooted and at certain points in India’s history, it has been playing a very important role,” Ambassador Alexander Kadakin said after getting on board the Marshal Shaposhnikov. “The arrival of the vessels from the Pacific Fleet shows and very graphically illustrates the strategic and privileged partnership that our countries have.”

Large anti-submarine destroyer Marshal Shaposhnikov was laid down at the Yantar Shipyard in Kaliningrad in 1983.

The Marshal Shaposhnikov, which is named after Red Army hero Boris Shaposhnikov, has a chequered recent history. The ship went on an anti-piracy operation in the Gulf of Aden in 2010, when it freed a Russian merchant vessel that was hijacked by Somali pirates. The anti-submarine destroyer has 2 Ka-27 helicopters and a naval infantry unit on board.

The Russian ambassador, who rubbished media reports about a cooling in Russia-India relations, said he was happy to see increased naval exchanges between the countries. “There was a lull in the exchange of our military ships but we are now again working with India and continuing an old tradition from even before 1971,” Kadakin said. He added that the second phase of Indra will held next year off the coast of Mumbai and will be a much larger set of exercises.

The word Indra is a portmanteau of India and Russia. Since 2003, the two countries have held five Indra-series joint ground and naval exercises with the last one being held by army units in 2010.  The first Indra naval exercises were held off Indian waters in 2005.