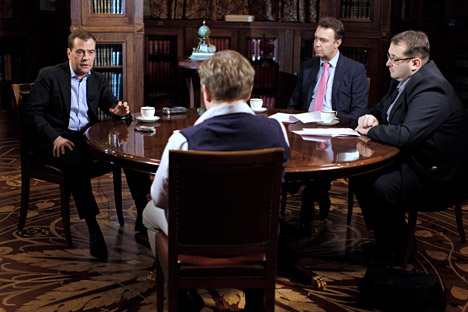 The Russian Prime Minister's recent interview with Kommersant Daily indicates that Moscow will stick to its previous position in foreign policy and come up with flexible approaches to deal with future challenges.

Russian Prime Minister Dmitry Medvedev discussed Russia's domestic and foreign policy with the Kommersant daily on Thursday. The list of issues ranges from military reform to the Moscow expansion.

From the Moscow expansion to the relocation of the authorities

Medvedev also touched upon the country's domestic policy and, particularly, the expansion of Moscow. He raised his eyebrows when the possible merge between Moscow and the Moscow Region in the near future was mentioned.  "I would put it straightforward: This is too much for our country," he said. "Some 20 million [of people in Moscow and Moscow region] is one seventh of the country. I think it will be difficult to manage. However, such ideas will definitely be discussed," he said.

At the same time, he thinks that a feasible merge is the one between St. Petersburg and the Leningrad region.

"In my opinion, if we speak about unification, then for example the unification of St. Petersburg and the [Leningrad] region is a more realistic task. It is primarily because there are fewer people there, no more than 7 million. It can be managed. However, this is very difficult from the judicial, administrative and even humanitarian point of view. Size matters."

The Russian Prime Minister also clarified the situation on the relocation of high-ranking officials and authorities to the territories recently attached to Moscow.

"Despite the now popular opinion the project is not closed. Every task is assigned and is being worked on," he said.  "Talking about the presidential administration, the government and the parliament they can theoretically be moved to New Moscow, but technologically this is a difficult task."

A plan on the relocation of the authorities has not been approved.

"There was just an idea based on the assumption that it is uncomfortable that administrative bodies are scattered all over the territory of Moscow," he said. "This is uncomfortable for Muscovites and officials who have to go from one building to another and waste time. In many countries authorities are centered in one place. But of course one should count how much this will cost."

The decision to relocate authorities was not made for the sake of relocation.

"I am sure that we will witness a rather tumultuous development of new territories," he said. "And it is good for these territories as well, because living standards are higher in Moscow than in the Moscow region."

Medvedev also talked about Russia's energy sector and the state's role in it. According to him, a 20-25 percent stake would be enough for the state to control Rosneft  if the oil company has a large enough free float, he said.

Owning a controlling stake is not, in the legal sense, mandatory for the state to retain levers of influence, he explained.

"What do we mean by preserving control? The controlling stake [which is 50 percent plus one share in Russian law] is very rarely concentrated in one pair of hands in world practice," he said. "If ownership is spread out, then it would be enough to have 20-25 percent if the free float is significant," Medvedev told the paper.

BP itself is a classic example of a large free float. If last year's aborted strategic partnership deal and equity swap between BP and Rosneft had gone ahead the Russian company would have become the biggest co-owner in BP with just 5 percent.

"There's no final decision," Medvedev added. "Practical parameters have to come first. Is it beneficial to pull out of the company entirely? What can we raise from the sale?"

"This is currently a very big player and is destined to become the biggest player on the oil market [with the TNK-BP buy], but at least it's a state company which is subject to privatization," he said. "Right now this is a very large company and with the acquisition it will become more expensive, its capitalization will grow, dividends will grow and so will revenue from the privatization of Rosneft."

A time will come when we have to decide what to do with the controlling stake. That of course will be a separate choice, but everything up to a controlling stake can be sold, depending on the market," Medvedev said.

When asked about Rosneft's takeover of TNK-BP, Medvedev said: "This is the exception rather than the rule. I'm always careful about these deals because I don't think it's right to boost the state's stake in companies, let alone such commercially successful companies like TNK-BP."

"But I'll tell you something else," he continues. "If things go as far as a divorce, then the Russian Federation will not be indifferent to whom the new owner is going to be. I won't name the companies that could have laid claim for TNK-BP, nor the states behind them but, if the choice were to be between a Russian state company and some other companies when the future of a very large Russian oil company is at stake then I'd choose the Russian state company."

In addition, Medvedev discussed the situation in the financial market, Central Bank and corruption.

Related: How far will the Kremlin’s corruption crackdown go?

"But there is no financial decision. Therefore I gave instructions to analyse all options, starting with strengthening the current institution that handles regulation on financial markets and ending with the complete transfer of these powers to the Central Bank," Medvedev said.

Intensive discussions within the government on the idea of creating a financial markets megaregulator based on the Central Bank and obtained by merging the Federal Financial Markets Service (FFMS) into it began in the August.

At the end of October, Medvedev gave government agencies a month to analyse the options for creating a megaregulator, as well as work out the possibility of preserving and strengthening the FFMS. However, most observers believe the government will pick the option of having the Central Bank take over and gradually absorb the FFMS. The deadline for carrying out Medvedev's instructions has already passed.