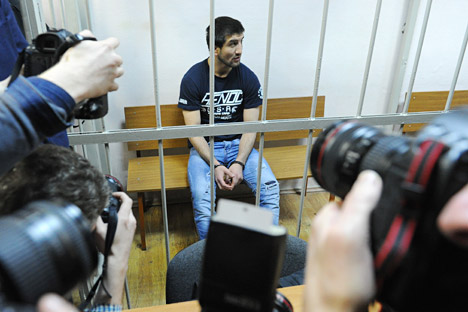 After 15 months in jail, world mixed martial arts champion from Dagestan charged with manslaughter of ethnic Russian is released by court decision which has outraged nationalists.

A Moscow court recently gave its verdict in one of the most high-profile cases of the last few years. Russian combat-sambo champion Rasul Mirzaev, 26, received a sentence of two years in prison for the negligent homicide of 19-year-old student Ivan Agafonov.

Mirzaev had spent 15 months in jail prior to the verdict and was released immediately in the court building after sentencing, since one day in detention counts as two in prison.

In a country where 19 percent of the population supports the slogan “Russia for Russians!,” and 40 percent believe that this slogan “should be brought to life, albeit within reason,”* the death of Agafonov (an ethnic Russian) at the hands of Mirzaev (a Dagestani national), has caused a nationalist hysteria.

On Dec. 1, a nationalist rally in St. Petersburg demanding a revision of the court sentence for Mirzaev brought together relatively few people and involved no incidents, Interfax reports. Witnesses of the rally, which had been permitted by the authorities, estimated that the turnout had been around 40.

Initially, the sole purpose of the rally, as stated in the organizers' application for official permission, was to protest the stricter rules on the possession of weapons. However, organizers decided to put the Mirzaev case at the top of their agenda.

Organizers also decided not to drop the weapons issue, in order to avoid accusations of illegal departure from the stated agenda. During the rally, an official warned those present that the organizers would face legal action if the stated agenda was not followed.

Interfax has not been able to obtain information on whether legal proceedings were launched against any of the rally participants.

“Moscow’s Zamoskvoretsky Court has proved yet again that the life of a Russian in the Russian Federation is worth nothing,” the nationalist movement Russkie said on its website.

As Kommersant reports, the sentence was passed as the crowd outside chanted “Shame!” and “You won’t get away with the death of a Russian on Russian soil!” According to an Interfax source in law enforcement, “Mirzaev was taken from the court building in a guarded police van and was delivered to his brother and lawyer.”

The incident between Mirzaev and Agafonov took place outside of a Moscow nightclub in August 2011.

Friends of Mirzaev and Agafonov, who were present during the disagreement, gave different testimonies of the events. The only genuine fact the investigation managed to establish was that the spat between Mirzaev and Agafonov was caused by Mirzaev’s girlfriend.

Mirzaev punched Agafonov, causing him to fall and hit his head on the pavement. Agafonov lost consciousness and was taken to the hospital, where he fell into a coma and later died without regaining consciousness.

Mirzaev turned himself in and was arrested on charges of willfully causing bodily harm, which resulted in manslaughter. The charge carries a maximum sentence of 15 years in prison.

In January 2012, the Zamoskvoretsky Court reviewed the charges and decided that Mirzaev would face a maximum sentence of two years. In February, the court decided to release Mirzaev on a bail of 100,000 rubles ($3,240). The decision was reversed by the higher Moscow City Court the following day, and charges were once again brought under an article carrying a harsher sentence.

In August 2012, the prosecutor requested that the court amend the charges to those carrying a less severe sentence. Five examinations were conducted in order to prove that Agafonov’s death was caused by his fall and impact, rather than the punch delivered by Mirzaev.

“When the day of the verdict came, I swear to you, I thought I would lose it… I’m still shocked… I was in a fog, I couldn’t believe that it was happening,” Mirzaev told Moskovsky Komsomolets after the verdict was announced.

The victim’s family plans to appeal against the court ruling. “We did hope that the verdict would be objective,” Oksana Mikhalkina, Agafonov’s attorney, told Kommersant. “But it turns out that Mirzaev is innocent, and we need to blame the pavement.”

Each hearing of the Mirzaev case required a security upgrade around the court building. On Nov. 25, the police had to cordon off Manezhnaya Square adjacent to the Kremlin, for fear of “possible clashes between various groups of young people.”

Experts interviewed by the Russian Legal Information Agency (RAPSI) were split on the ruling. Lawyer Aleksandr Arutyunov believes that the judge had no option, because the conclusions made by forensic specialists were clear.

“Naturally, the victims disagree with the decision, but the court based its ruling on the forensic evidence,” said Arutyunov.

Aleksei Melnikov, also a lawyer, argues that the verdict is unfair to the martial arts champion. “Even the Soviet criminal justice system worked out an approach that, if a specially trained person makes use of their skills in everyday life, the court can’t regard it as negligence,” said Melnikov.

Aleksei Mikhalchik believes that it is wrong to put athletes into a separate category. “We can only speak about the direct or even indirect connection between Mirzaev’s punch and Agafonov’s death if the offender was aware of the possible consequences,” the lawyer said.

Defense counsel Maksim Dombrovitsky points out that the case is aggravated by “the ethnic factor,” which is why it has received so much publicity. “Such cases are not infrequent, but they never get this kind of coverage,” said Dombrovitsky.

Agafonov could have been the one to face trial had it not been for the incident outside the club, Kommersant reports.

In May 2011, he was charged with robbery. According to the police, Agafonov ordered three iPhone smartphones and then robbed the delivery man with his accomplices, who were cadets at a police academy at the time. Agafonov was not arrested then, although the court made a relevant ruling. He had been released before the incident with Mirzaev took place.

The article is based on materials from Kommersant Daily, Interfax, the Levada center website, Moskovsky Komsomolets and RAPSI News.