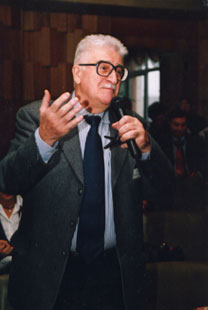 ‘Simonia, Selected Works’ has a series of insights on political discourse that would be of great benefit to younger readers.

Works reviewing Russia’s recent Soviet past and juxtaposing the specific features of the country’s development with its global peers inevitably draw a lot of attention. This is precisely what the new book by one of the most respected Russian experts in Oriental Studies, Nodari A. Simonia, is destined to do. It brings together articles from both the Soviet period and those written in the past two decades.

Oriental Studies (just like the entire range of sciences about the so-called Third World) were originally the least dogmatised branch of social sciences in the USSR. With the intellectual level of scientific discussion being fairly high, Soviet Oriental studies exceeded the best global standards in key parameters.

There were two factors that helped advance Russian Oriental Studies: the systemic, cross-disciplinary nature of scientific work and the freedom of our efforts stemming, in no small measure, from the fact that the Communist party had insufficient insight into the peculiarities of Oriental societies. The party bosses, incidentally, were planning to turn these societies into the “avant-garde of anti-imperialist struggle.”

The “struggle” depended heavily on such people as Nodari Simonia, who made full use of the freedom he was allowed on this space. In a multi-author study, ‘Synthesis of Traditional and Modern in the Evolution of Third World Societies’ (1984), Simonia laid down a few fundamentally new approaches, which sparked bitter controversy in the academic circles at the time.

Indologists attacked Simonia for his “authoritarian parliamentarianism” concept first illustrated through Indian materials. I must admit, we were dazzled by the catchy name, “authoritarian parliamentarianism,” which prevented us from sensing the transitory nature of this socio-political phenomenon, and the fact that it was setting the stage for a new quality of meaningful democracy which, in my view, India now enjoys.

Continuous regroupings of socio-political forces in the country in the past two decades have justified Simonia’s right to carry out research in the field of methodology of political analysis.

Chapters contributed by Simonia to ‘The City in the Formational Development of Oriental States’ (1990) are, in my view, the most mature work he produced during the Soviet period. His collaboration with A. Petrov, as well as his other colleagues from the Institute of Oriental Studies of the Academy of Sciences of the USSR, helped him create a fundamental work, which has so far remained unrivalled in Urban Studies (and even Third World studies) in terms of its depth and systemic coverage.

The work is purely academic in style, with almost no debate. But ‘The City’ also has a hidden agenda. Written during the height of Perestroika, it hints at shaping a certain concept of changes that would, according to its authors, address specific modernising transformations and avoid the deadlock both the government and the society are facing today.

Simonia’s works of the Soviet period were also politically relevant. Particularly notable is the spread of his ideas (possibly, involuntary) in political theory.

To clarify, Fareed Zakaria’s “illiberal democracy” can, strictly speaking, be regarded as “notes on the margin” of “authoritarian parliamentarianism.” Furthermore, I think the theories of political and social revolutions developed by Simonia have given much food for thought to his colleagues in the West and the East, especially in the past two decades.

The second part of the book featuring works of the past, post-Soviet, decades is not merely a chronicle of “liberal reforms,” but also an attempt to conceptualise the path of “development” which has brought Russia to an historic impasse. And as we are groping for a way out of it, the “resurrection” of society (to use Leo Tolstoy’s metaphor), we will have to answer a number of fundamental questions.

First, Simonia is perfectly right to point out the formation of “bureaucratic capitalism” in Russia. Obviously, an economic (and political) system of this type has little in common with “democratic capitalism” – a cherished idea of the mastermind of the liberal reforms of Yegor Gaidar and his team in the 1990s. Meanwhile, the sort of “transformations” they launched could not have produced any other result.

Respected American scholar and professor in Russian studies Stephen Cohen had every reason to call the political process of the 1990s, at the height of “liberal reforms”, “de-democratization”.

At this point, it is worthwhile to ponder, together with Simonia, the fundamental specific features of Russia’s socio-historical reality.

It would also be useful to contemplate the well-known maxim of historical and economic studies which implies that the leaking of “democratic capitalism” resulted from the Reformation and Enlightenment, which, putting it mildly,  had a “subdued” nature in Russia. It follows from this simple statement that the historical/economic/political subject of social transformations had not been formed. This has been discussed and argued in detail, not only by Simonia, but also by his colleagues L. Reisner, R. Landa, V. Krylov, M. Cheshkov among others.

India: A century of struggle and The rise of a Superpower

In the 1970s–1980s, the question was put in a straightforward and simple way: what social force could “cement” an inhomogeneous economy and a “mosaic society”? The “Arab Revolutions” have demonstrated convincingly that the question is by no means irrelevant.

Secondly, Simonia raises the question of the quality of power, which modern western scientific discourse addresses as “governance.” Max Weber saw a rational bureaucracy as a synonym for the quality of governance. The question is whether Russia actually has it.  I am afraid that bureaucracy has not yet emerged in Russia as a stratum responsible for the organisation of administrative processes in the country and the rational regulation of our chaotic existence.

In Russia, the class of incompetent officials, referred to as chinovnichestvo, ever coveting more power and money still sets the pace. Naturally enough, Russian literary classics, especially Nikolai Gogol and Alexander Ostrovsky, have been in great demand among Russians for a few decades now.

Furthermore, the government’s anaemia prompts the most fantastic ideas to spring up in society, from anarchism to national fascism, which are spinning out of control and getting harder to deal with legitimately. This has led us, my humble self and G. Shirokov, a colleague and friend of Simonia, whose relations go back many years, to coin a new term to describe the recent decades: ‘The Revolution of C Students’, and not the bourgeois-democratic transformation of our society.

Still, a number of questions arise. What political form should it take: authoritarian parliamentarianism or nationwide agreement/consensus? What will be the balance between the elements of spontaneity and activism as the process unfolds? What is the strategic goal of the concept of Reform – to build capitalism, or to modernise Russian society thoroughly and comprehensively, building a society where everyone feels like a Man and a Citizen?

We understand perfectly well that authoritarian parliamentarianism, to use Simonia’s term, can no longer maintain an equilibrium in society. Society must, however, use its newly found freedom wisely, with the “consciousness of necessity”, that is, it must leave the fragile social tissue of contemporary Russian society intact.

The decisive role here will certainly be played by the more “grown-up” common sense of the Russian people and academic research, of which the government and officials are equally suspicious.

This, in my opinion, is the culmination of the idea. In his works, Simonia raises the issue of “civilised Russian capitalism”. He advocates “civilised capitalism” in Russia, and we believe that it is possible.

Meanwhile, Russian history shows that the country has already had some philosophers who, long before “historical materialism,” believed that capitalism would be nothing but a dead end for Russian society. Take Dostoyevsky, for example. He drew attention to the fact that the reforms of Alexander II, to which he became the main victim, were followed by the harsh counter-reforms of Alexander III which did not, however, derail the first industrial revolution in Russia (which took place in the 1850s–1890s).

Meaningful Reform (with a capital “M”) is precisely what will serve as the antithesis to extremities of every kind. Specifically, capitalism in Russia must not be deformed or disfigured, with the only way out being social disturbances that the country will simply not survive.

The author’s message “urbi et orbi” can be easily read between the lines: without academic research and formidable intellectual support, the government has no resources to pull the country back to the path of sustainable and predictable development.

The book addresses mainly the generation that is just starting out in life. Therefore, the value of this edition of the Selected Works is in its potential to restore the now defunct culture of reading and critical thinking among young people. The young reader must remember that the fate of the country is in his hands.

events RIR Fall of the USSR