Will Palestine's new status resolve its conflict with Israel? 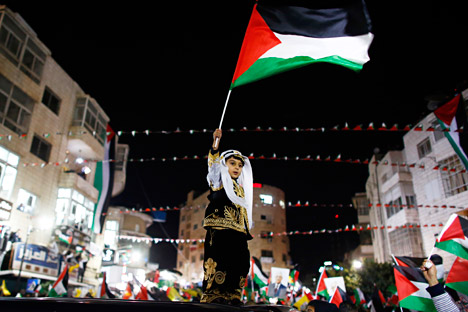 Russia’s UN envoy Vitaly Churkin: “We are hoping that Israel will also take this as a serious signal from the international community, which is tired of the unresolved conflict between Palestine and Israel.” Source: Reuters / Vostock Photo

The UN General Assembly's vote on Palestine's new status as a UN non-member observer was a way of putting pressure on Israel. The results of the vote indicate that an overwhelming majority of UN members sympathize with Palestinians. Still, a lot needs to be done toward resolving the Israeli-Palestinian conflict.

Palestinians have certainly scored a moral victory by winning a UN non-member observer state status. How far this move will take them down the road to full-fledged statehood is a completely different question.

The U.N. General Assembly vote on this issue was a way of putting pressure on Israel. The results of the vote showed that an overwhelming majority of UN members — with 138 states “for” and only nine “against” — sympathize with Palestinians. And this has opened up the opportunity for Palestine to appeal to the International Criminal Court in The Hague to investigate Israel’s war crimes.

In theory, such a situation should encourage the resumption of Palestinian-Israeli talks. Russia’s UN envoy, Vitaly Churkin, noted after the vote: “We are hoping that Israel will also take this as a serious signal from the international community, which is tired of the unresolved conflict between Palestine and Israel.”

France’s President François Hollande made a similar statement: “Direct dialogue is in fact the only way to find a definitive end to this conflict. France, as a friend of both Israel and Palestine, is willing to contribute to this process,” the president’s statement read.

The Palestinian National Authority president, Mahmoud Abbas, is also ready for negotiations: “We are committed to gaining our rights through peace and negotiation. We will not be afraid; we will continue to apply all possible efforts to achieve the end goal peacefully.”

Tel Aviv has yet to give an official reaction to the decision, but Israel’s position is unlikely to be much different from America’s.

Susan Rice, U.S. Ambassador to the UN, said that the “unfortunate and counterproductive resolution places further obstacles in the path to peace. That is why the United States voted against it.”

“Today’s grand pronouncements will soon fade. And the Palestinian people will wake up tomorrow and find that little about their lives has changed, save that the prospects of a durable peace have only receded,” said Rice.

One of the problems is that Palestinians in the West Bank and Gaza are deeply divided.

“We, Palestinians, have our own internal problems, our split. The time has come to bridge this divide, to unite all Palestinians,” Abbas said.

The West Bank, ruled by the Abbas-led Palestinian National Authority, largely supports a course for political settlement. The Hamas-ruled Gaza strip is an entirely different matter, and sentiment there is totally different.

According to Alexander Shumilin, who directs the Center for Studies of Middle East Conflicts at the U.S. and Canada Institute of the Russian Academy of Sciences, “Gaza’s Hamas leaders don’t repudiate the UN General Assembly’s decision, but they never really sought it in the first place. And Hamas leaders’ comments on Mahmoud Abbas’s initiative have been mostly critical — that this is yet another step on the path of Mahmoud Abbas’s capitulation, before Israel as well, and on the way of wrapping up the Palestinian problem […] The Hamas leaders see the solution for Palestine’s problem differently — as the liquidation of the state of Israel.”

Whether Abbas would be able to unite Palestinians with such differing approaches is a moot question, and a lack of unity is not the best bargaining position.

Another problem spawned by the UN decision is the devaluation of key negotiating principles.

The current peace process is based on the 1993 Oslo Accords, the main outcome of which has been the mutual recognition and establishment of the Palestinian National Authority. The status of Jerusalem, Israeli settlements, and the problem of refugees have all remained unresolved. They constitute the subject of further negotiations, which have stalled.

However, under the agreements, Israel and the Palestinian National Authority must negotiate those issues directly, without interference from any third parties. The UN resolution has changed the status of Palestine without consulting Israel. This is a cause for abandoning the Oslo Accords. While Israelis are unlikely to make full use of it, they now certainly have a tool for applying counter-pressure, which will be handy at any future negotiations — and negotiations are inevitable.

Palestine did not just receive any 138 votes: These included almost the entire European Union, Russia, China and the Arab countries. This reflects an understanding that, for all of the controversy of the UN General Assembly resolution, the Palestinian-Israeli settlement needs to be expedited, given the current instability in the Middle East.

If the U.N. vote is any indication, three of the four Quartet members are ready to start consultations.