Putin reassures Turkey that Syria is no threat 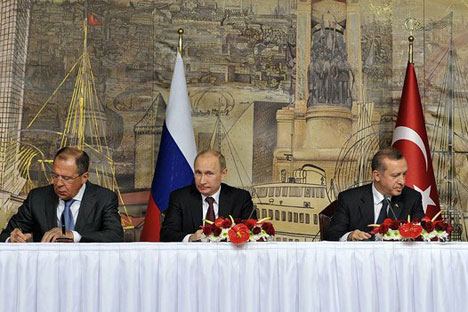 Putin reassures Turkey that Syria is no threat. Source: Kremlin.ru

Putin said that Moscow shared Turkish concerns over recent incidents on the Turkey-Syria border, but urged both sides to show restraint in dealing with the volatile situation.

Russian President Vladimir Putin on Monday reassured Turkey that Syria is too busy dealing with its internal conflict to plan any attack on its neighbours.

“It’s common sense, you don’t have to be an expert or use intelligence reports to see that Syria is far from plotting an attack on its neighbours – it is absolutely unrealistic,” Putin said at a joint news conference with Turkish Prime Minister Recep Tayyip Erdogan in Istanbul.

He said that Russia shared Turkey’s concern over recent incidents on the Turkey-Syria border, but urged both sides to show restraint in dealing with the volatile situation.

Turkey has opened fire several times in recent weeks across its border with Syria in retaliation for shelling from Syria, which killed five Turkish civilians in October. It has also provided shelter to refugees fleeing the violence in Syria, and has been one of President Bashar al-Assad’s harshest critics during the almost 17-month revolt against his rule.

Related: Russia-Turkey ties slip downhill to the lowest level with over grounding of Syrian plane

Tensions between Turkey and Syria flared dangerously this summer, after Damascus shot down a Turkish fighter that had violated its airspace. Turkey threatened retaliation if there was any repeat of the incident, although it admitted its plane had mistakenly strayed slightly into Syrian airspace.

The Russian president downplayed the possible deployment of NATO Patriot air defence systems in Turkey along its border with Syria, and stressed that this would only complicate the situation in the region.

“First of all, Patriot is not the best air defence system in the world, and, secondly…the deployment of additional [military] capability on the border does not ease the tensions but aggravates the situation instead,” Putin said.

Turkey formally requested Patriot missiles from the military alliance after weeks of talks with NATO allies about how to shore up security on its 900-kilometer border with Syria.

Putin also said that Russia and Turkey had agreed on the need to end the conflict in Syria, but acknowledged that Moscow and Istanbul did not yet see completely eye to eye over how to achieve this goal.

“We discussed this issue today with our Turkish colleagues, and came up with some new ideas, which require further analysis and planning,” the president said.

The Syrian conflict has claimed tens of thousands of lives since the uprising against Assad started in March 2011, according to UN reports. The UN said on Monday it was pulling as many as 25 out of its 100 international staff out of Syria in response to the deteriorating situation around Damascus.

Russia, along with China, has drawn heavy Western criticism for its refusal to support UN sanctions against Assad's regime, Moscow’s sole remaining ally in the Arab world. Moscow said the proposed UN resolutions in fact betrayed a pro-rebel bias and would do nothing to bring peace.

Putin reiterated on Monday that Russia’s stance on the Syrian conflict was not aimed at protecting Bashar al-Assad’s regime, but rather reflected Moscow’s concerns over the broader outcomes of the crisis in Syria.

“I have said many times that we are not advocates of Syria’s current leadership, but we are concerned about what will happen [in Syria],” he said.

“We do not want the repetition of the mistakes which we believe have been made in the recent past,” Putin said, implicitly referring to the “Libya scenario,” which saw the ouster and murder of long-time Libyan dictator Muammar Gaddafi after a NATO military campaign.