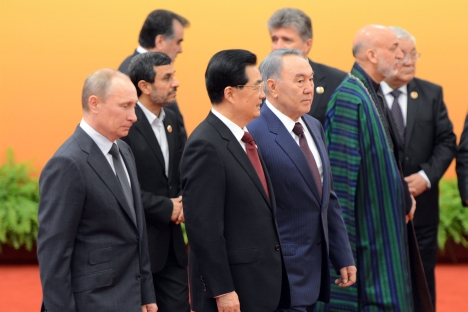 The leaders of the Shanghai Cooperation Organization at the 2012 summit in Beijing. Source: Reuters

Issues such as Afghanistan, extremism, terrorism and drug trafficking, economic cooperation particularly in the areas of infrastructure and energy will likely form the main agenda.

The 11th prime ministerial meeting of Shanghai Cooperation Organization (SCO) is taking place on 4th and 5th of December in the Kyrgyz capital of Bishkek. The meeting assumes significance as some of the members like Russia and China bear international clout, and the Central Asian members too acquire a special position in the emerging power matrix in Eurasian region.

Issues such as Afghanistan, extremism, terrorism and drug trafficking, economic cooperation particularly in the areas of infrastructure and energy will likely form the main agenda during the meeting. Chinese Premier Wen Jiabao will be visiting Moscow after the meeting to deliberate with Russian President Vladimir Putin. The meeting at Bishkek is certainly instructive as the deliberations will bring into focus the crucial policy agenda of major players in the region, and also how the players perceive not only issues of regional concern but also global concern such as the Syrian crisis and Middle East crisis, both of which will likely figure in the deliberations.

Pakistan’s Information and Broadcasting Minister, Qamar Zaman Kaira told the press in Islamabad that his country will bid for permanent membership during the meeting in Bishkek. Currently, Pakistan along with India, Iran, Afghanistan, Pakistan and Mongolia are observers in SCO, conceived in Shanghai in 2001. As the Chinese daily Xinhua on 3 December 2012 articulates, the ‘Shanghai Spirit’ behind the formation of this organisation stipulated that it would be based on “a spirit of mutual trust, mutual benefits, equal rights, consultations, respect for multiculturalism and endeavor to common development.”

Since the last decade, the organisation has conducted joint military exercises, established a SCO bank, and made trade agreements though mostly bilaterally among members. China has substantially increased its stakes in the region. Like Pakistan, India too is interested to be a permanent member of the grouping. While Russia appears to be supportive of India’s possible inclusion, China seems to be dithering on such an idea. China will perhaps prefer Pakistan than India, as it perceives Pakistan as a close ally, though the bilateral trade between India and China far surpasses than that of Pakistan and China.

Though China will vigorously pursue its economic agenda in the meeting as highlighted by Chinese media, issues of strategic stability and peace will likely be part of the deliberations. Particularly the issue of Afghanistan will figure prominently. On 29 November the US Senate passed a majority amendment appealing the US government to hasten the process of withdrawal of forces from the war-torn country. The two main reasons forwarded by Senator Jeff Merkley the chief sponsor of the amendment were: the weakening of Al Qaeda in Afghanistan and its lack of capability to target the US; and the refocusing the US forces to other areas. Notwithstanding the US objectives, Afghanistan still remains a quagmire and the SCO meeting will likely broach some broad ideas as to how to develop a regional format to evolve peace and stability in the region.

Pakistan, a crucial player in Afghanistan, with its presence in the meeting may play a crucial role in the evolution of a regional mechanism to address the situation. Already negotiations are going on between Pakistan and Afghanistan in the context of peace and stability in the region. Pakistan has released some of the Taliban members from its prisons. Other players like Russia, India and China, and Central Asian countries need to play crucial roles in fostering an inclusive peace process in the region.

Issues like extremism and terrorism may surface during deliberations. China confronts this menace in its northeast, Russia in its south and India in its northwest. This issue is also linked to Afghan peace process. It is still unclear what role the Taliban will play in this process, and whether it will camouflage itself as a peacemaker as a strategic bargain and then emerge as a peace breaker.  Its rule in 1990s betrays the moderate perception that it will support the peace process in long term. In this context, the regional players have bigger roles to play to ensure that peace process remains sustainable. Groups like Taliban and Haqqani network, and border areas of Pakistan-Afghanistan have played critical roles in fomenting extremism and terrorism in the region and worldwide with money generated from drug trafficking.

Economic issues will be crucial during deliberations at Bishkek. As reports suggest, China is keen to broker a gas deal with Russia under which Russia will supply 68 billion cubic metres of gas to China each year for the next three decades. Though the deal is not finalised yet, the visit of Russian premier to Moscow may further bolster the process of finalisation.

Issues of infrastructure such as building transport corridors connecting all countries of Central Asia, or building pipelines, roads and bridges will likely figure in the deliberations. China is keen to enhance its role in Central Asia. It is interested to develop cooperation with countries both ‘multilaterally and bilaterally.’ It implies, if multilateral ideas of cooperation fails, China will go ahead with bilateral deals with the countries. It exposes China’s single-minded determination to make deep inroads in Central Asia.

There are strategic fall outs no doubt, and how far China takes along other players, particularly Russia, while launching its policies will determine the shape of its game plan in the region.

The Syrian and Middle East crises will likely figure in the deliberations. In its June summit, the grouping had raised its voice against any foreign intervention in Syria. The Bishkek meeting may reiterate the same position. And in the context of Middle East conflict, the grouping may adopt a balanced posture urging the countries to shun violence and return to peace table.