The Voice of Russia
Sergey Duz 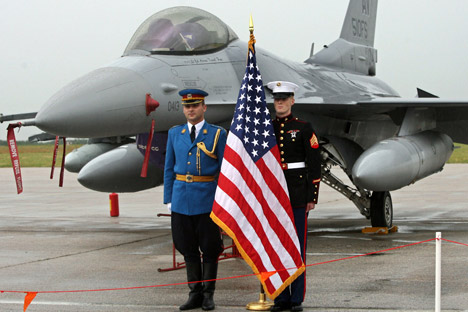 Russia and India are among the countries that are eager to know of NATO’s strategy after the withdrawal of coalition forces in Afghanistan.

Russia is interested in NATO’s strategy after 2014 for when the withdrawal of the coalition forces from Afghanistan is planned. Other countries which have interests in Afghanistan would also like to receive an answer to the question raised by the Russian Ambassador to NATO Alexander Grushko in Brussels.

As you know, Afghanistan is often called a crossroads between the East and the West.

For the time being, Americans either remain undecided over the number of the remaining contingent or are unwilling to make this information public. According to The Wall Street Journal, the figure is 10,000 servicemen. The Pentagon gives another figure – 25,000. In any case, this is far less than the current NATO contingent that numbers nearly 70,000.

“They would like to pull out their main forces and to leave sufficient forces there so that they could feel confident,” says Fyodor Lukyanov, Editor-in-Chief of the magazine Russia In Global Affairs. “Hence – new attempts to reveal the so-called moderate Taliban fighters. After Obama’s re-election a boost was given to this process. Americans want to stay in Afghanistan as a guarantee that their interests will be taken into consideration there.”

Lukyanov added that no one knows how the situation in the war-ravaged nation will turn out. “Their bases are being strengthened there, and all this is an object of continued suspicions that Americans will stay for long there. Explaining their conduct, Americans say that this is something they always do to settle in a new place. The truth is nobody knows. I think that Russia will receive an answer to the above-mentioned question in time. Obama’s administration does not want to aggravate the situation.”

Whatever the answer, it is rather doubtful that Russia will share the Afghanistan responsibility with the Americans after 2014. However, Moscow will provide logistics support. The significance of the so-called northern route to transport both the forces and cargoes of the coalition forces in Afghanistan via Russia will only grow in the future. Moscow is calling for making efforts to prevent Afghanistan from turning into a hotbed of international terrorism once again and does not want it to remain a world drug lab.

Related: The Russian navy as an instrument of grand strategy

Remodelling of the NATO mission in Afghanistan, a considerable reduction of the Western coalition’s contingents and the handover of responsibility for security in Afghanistan to the local authorities – all this will inevitably lead to changes. There is reason to believe that the country will face a new outbreak of a civil war as a result of which Taliban fighters inspired by the long-awaited victory would come to power in Kabul with Pakistan’s support. Americans will have to reach an agreement with them and also to compete with China that has serious economic and geopolitical interests in Afghanistan.

Moscow does not want the political temperature in Central Asia to rise above the critical point of self-ignition, when a word dropped by somebody may trigger a fire storm in the entire region between India and Russia.