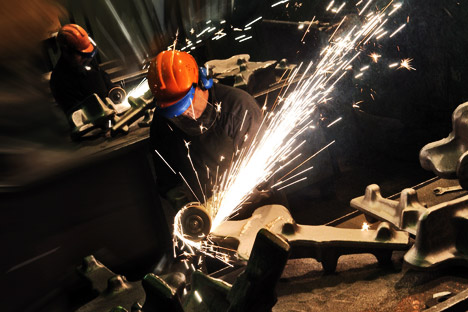 The production of titanium details at a plant of the VSMPO-Avisma corporation, the world’s largest titanium producer. Source: ITAR-TASS

The state-controlled hi-tech corporation Rostekhnologii (Russian technologies) has decided to sell a 45.42 percent stake in the world’s largest titanium producer, VSMPO-Avisma, to the producer’s management. The managers earlier acquired a 4.6 percent stake in VSMPO-Avisma on the open market.

These two blocks of shares will be transferred to a joint enterprise that was created especially for this deal, in which 75 percent, plus one share, will be held by the management and 25 percent, minus one share, will be held by Gazprombank. Thus, this joint enterprise will control VSMPO-Avisma. After the deal is closed, a blocking stake in the titanium producer (25 percent, plus one share) will continue to be held by Rostekhnologii, while the rest of the shares will remain in free float.

The stock price of VSMPO-Avisma was set at $187 per share for the buyers, as compared with the average-weighted price of $161 per share on the Moscow Stock Exchange for the past three months.

“The acting management of VSMPO-Avisma has contrived to significantly increase the volumes of titanium produced. In 2012, the maximum amount of titanium ever produced was exceeded by 10 percent. We expect that production volumes will continue to increase by 10-15 percent a year, until 2015,” said Sergei Chemezov, general director of Rostekhnologii.

“Since the new management team led by Rostekhnologii began work, strategically important contracts have been signed to supply titanium alloys to Boeing, Airbus, Embraer and Rolls-Royce." he added.  "The enterprise is now financially stable and has received many orders. For example, Boeing plans to buy hi-tech products from VSMPO-Avisma until 2018, which will create very good prospects for growth. We see this as the right moment to transfer control to the management, which will buy back assets from us at a substantial premium.”

That VSMPO-Avisma’s strategy will remain the same after the deal is closed.

“When we become the enterprise’s main shareholders, we will continue to augment our share on the world titanium market, both by increasing supply volumes to the world’s largest aerospace concerns, and by expanding into new dynamically growing market niches such as medicine, car manufacturing, and oil-and-gas extraction,” said VSMPO-Avisma’s general director, Mikhail Voevodin.

Today the corporation controls roughly 30 percent of the world titanium market. However, in the very new future it plans to dramatically increase this share, in part by working more actively on the domestic market in Russia and on markets in the Commonwealth of Independent States.

“This year we signed our first long-term contracts with Russian companies, as a result of which the share of orders in Russia increased by 5 percent for the first time in several years to reach 35 percent of our total portfolio,” said Voevodin.

VSMPO-Avisma’s most immediate task will be to increase its resources.

“Buying drilling companies in Ukraine will give us a stable base of raw materials," Voevodin said. "We’re already covering 30-40 percent of the enterprise’s demand for raw materials. In the future, we plan to make new major investments in this direction.”

It should be noted that the team formed by Sergei Chemezov came to VSMPO-Avisma in 2006, having bought a 70.42 percent stake from the corporation’s managers at the time. Rostekhnologii gained control of the enterprise when, due to a dispute among shareholders, the world’s largest titanium producer was about to suspend production.

Luckily, it did not. One year later, an investment program worth $1 billion was put in place. This allowed the enterprise to survive its crisis and increase production volumes.

If VSMPO-Avisma produced 27,000 tons of titanium in 2007, then today it produces closer to 40,000 tons. And, if before the enterprise produced mainly titanium products, then now it also manufactures stampings and details with a high added value. As a result, the company’s net profits have increased more than 40-fold, from 173 million rubles ($5.5 million) to 7.1 billion rubles ($225 million).

The sale of VSMPO-Avisma is only the first step on the road to ridding Rostekhnologii of its non-profile assets. This hi-tech corporation currently controls some 600 Russian enterprises in various industries: defense, automobile, chemical, electronics, aerospace, etc. But most of these will be sold over the next five or six years. The proceeds will be invested in projects of strategic importance for Russia — primarily unmanned flying systems and new attack helicopters, complete with engines.