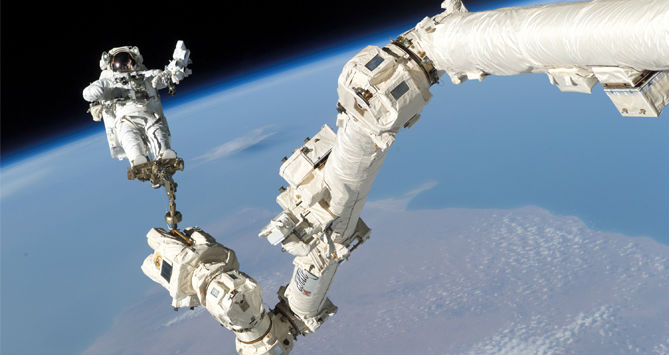 India and Russia are expected to take their cooperation in the field of space to a new high later this month and a couple of key new agreements are likely to be signed between the two sides when Vladimir Putin visits India.

A major area of opportunity for the two sides to take their cooperation in the fields of space and science and technology further would be GLONASS. The Russians have recently opened a huge door for India when Russian Deputy Prime Minister Dmitry Rogozin announced his country’s willingness to offer India joint participation in development of its GLONASS satellite navigation system on an equal basis. This was the first time when Russia made such an offer to India. “We have offered our Indian counterparts not only use of the GLONASS system but also participation in upgrading it. We practically see it as a joint effort. I think our Indian counterparts will be interested in it,” Rogozin, who has been given special responsibility for Russia's military-industrial complex, went on record as saying.

The Indians are understandably enthused by the Russian large-heartedness. Foreign Secretary Ranjan Mathai alluded to this in his major speech in New Delhi on November 22, 2012 when he said: “Access to the whole spectrum of GLONASS signals by Indian agencies is a major component of the Indo-Russian space cooperation. This is matched by robust cooperation on important projects like Chandrayan 2, the Human Space Flight and YOUTHSAT.”

Importance of GLONASS for India

GLONASS, an acronym for Globalnaya Navigatsionnaya Sputnikovaya Sistema or Global Navigation Satellite System, offers India a very important strategic leverage with a vast array of applications in civilian and military spheres. GLONASS, a radio-based satellite navigation system operated for the Russian government by the Russian Aerospace Defence Forces, is a valuable alternative to the US-controlled Global Positioning System (GPS).

In December 2011, India and Russia had signed an agreement for receiving precision signals from GLONASS, which will allow missiles, including those fired from nuclear submarine Chakra, to strike within half a meter of distant targets. GLONASS is the only alternative navigational system in operation with global coverage and of comparable precision.

Space is one important sector of Indo-Russian bilateral cooperation where the Indians would be looking forward to working closely with Russia to push some major investment projects during Putin’s upcoming India visit. India is well aware that some Indo-Russian investment episodes in other fields have been mired in controversies and been log-jammed, but the space-related agreements in the pipeline would compensate for glitches in the past.

GLONASS is not just a project but also a powerful statement of Indo-Russian synergies. It is the most expensive program of the Russian Federal Space Agency, consuming a third of its budget in 2010. The Russian gesture of inviting India with open arms for this project points to the high orbit the Russians have placed India in.

GLONASS is a Soviet era project that began in 1976. From October 1982 onwards numerous rocket launches added satellites to the system until the ‘constellation’ was completed in 1995. GLONASS achieved 100 percent coverage of Russian territory by 2010. The GLONASS project achieved a major milestone in October 2011 when the full orbital constellation of 24 satellites was restored, enabling full global coverage.

The expanding Indo-Russian cooperation in space would not have come at a more opportune time as India has a busy calendar for the next five years which would require an investment of almost three billion dollars.

India’s flagship space agency Indian Space Research Organization (ISRO) has plans to launch its first manned space flight in 2017. The Indians are also eyeing deep space missions to be topped by lunar human landing, possibly by 2020. India’s space budget would be enormous by 2020. The maiden manned space flight of India would ensure that India arrives on the global stage in a big way, having a significant edge over several developed countries.

ISRO’s ambitious programmes include the setting up of several ground facilities like launch pads, the mission control centre, astronaut training centre, all permanent assets on the ground including what goes into the orbit. India and Russia have collaborated on technologies in the space sector which can integrate into platforms that India is developing.

India could not have made such deep forays into space without the Russian cooperation. It was the erstwhile Soviet Union that had launched first Indian satellites - Aryabhatta and Bhaskara from its Baikonur cosmodrome – in the seventies and eighties. Rakesh Sharma, the first Indian astronaut, travelled to the Soviet Salyut-7 space station in 1984.

The half a century old Indian space programme is now poised for a major leap as it has seamlessly moved beyond practical applications-based thrust to deeper and technologically far more difficult newer areas like India’s first lunar mission (Chandrayaan-1), navigation and joint ventures in space science. Space and Technology is one of the major arenas where India and Russia share a long standing and successful cooperation. Both the countries actively participate together in many fields of exploration and peaceful uses of outer space. Currently it has many operational agreements in the fields of moon exploration, global navigation system, human space flight and spacecraft building for atmospheric studies.

The Indian sense is that while the Indo-Russian collaborating is on the right trajectory there is scope for further improvement. India needs to play catch up with other countries who are investing heavily in research and development. A major challenge is also how to apply these from the laboratory to the assembly line and use them for the greater public good. In this context, Mathai has paid rich compliments to the Russian scientists by remarking thus: “The great record of Russian science (just recall the extraordinary achievements of the Academicians) makes this a partnership of great value.”