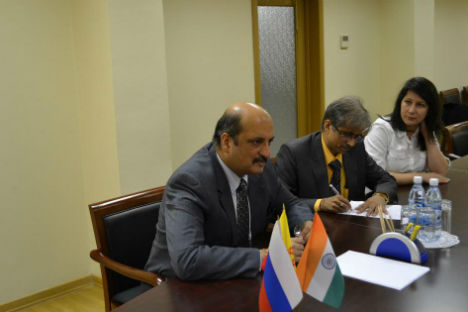 India has taken a quantum leap forward in developing bilateral cooperation with Russia’s regions, this year. Indian ambassador to Moscow, Ajai Malhotra visited six regions of the country with the special purpose of exploring the possibility of enhancing Indo-Russian cooperation in various spheres through boosting India’s interaction with the regional leaderships and people to people contacts. In the outgoing year, Malhotra has already visited several republics, including Tatarstan, Bashkortostan, Kursk, Sverdlovsk, Irkutsk and Chuvashia.

The Indian Ambassador, in the last leg of his trips to the regions this year, arrived in Cheboksary, the Chuvash capital, on a two day official visit on November 26-27 on the invitation of Chuvashia Governor Mikhail Ignatyev. “My visit to Chuvashia was very interesting, useful and fruitful for promoting bilateral ties,” Malhotra said after his visit to Cheboksary.

Chuvash republic, a Russia’s constituent republic with a population of over 1.3 million in the European Russia centre, is in the middle Volga valley. The region, consisting largely of the Chuvash plateau, is wooded steppe.

The most dynamically developing branches of industry in the region include electrical engineering, machine building, chemical industry, innovative sphere. Agriculture takes a special place in the economy of the Chuvash republic. There are a number of perspective projects in these branches, which require lot of foreign investment, a special sphere in which India can play a major role.

The programme of Malhotra’s trip to the republic included meetings with government officials, visiting a number of industrial enterprises, including Promtraktor, Tekhmashholding, Cheboksary Electric Apparatus Plant, Galen and Akkond.

During his visit, Malhotra held talks with the Chuvash Economics Minister Alexei Tabakov and Education Minister Vladimir Ivanov and exchanged opinions on a wide-ranging issues in order to further strengthen India’s bilateral relations with the region.

On November 26, Chuvash Minister of Economic Development, Industry and Trade Alexei Tabakov, had a meeting with Malhotra. At the Promtraktor, Malhotra examined the production, which includes CHETRA lines, and also took a test-drive of powerful new generation bulldozers.

During their meeting, Malhotra and Vladimir Ivanov discussed the questions of bilateral cooperation in the sphere of education. The Chuvash education minister told the ambassador that students from India have studied at the medical faculty of the CHSU n.a. Ulyanov in different years. The sides agreed that another important aspect of cooperation could be bringing students to know the ancient Indian culture, its traditions and customs.

“We can organise various contests on the history of India, compositions and other events to involve youngsters. I believe it will be very interesting for our children,” Ivanov said. On his part, Malhotra expressed readiness to support the winners and invite them to visit the Jawaharlal Nehru Cultural Centre (JNCC) in the Indian Embassy, Moscow.

His visit to museums also included participation on November 27 in events devoted to the 7th anniversary of the Indian Cultural and Information Centre “Maharaja” in the Cheboksary Raduga centre which was opened to promote cultural ties between the Chuvash Republic and India. In the past seven years, since its opening, over150,000 visitors have acquainted themselves with various aspects of Indian art, including music, dance, cinema, life and activity of outstanding people.

On the occasion, an exhibition titled “India through the eyes of Chuvash artists Anatoly Rybkin and Georgy Fomiryakov” was launched. It comprised more than 50 paintings and drawings by artists, who visited India and the Himalayas as part of a creative expedition. As a result of their trips, their works have been exhibited in the State Tretyakov Gallery, Moscow.

Malhotra visited Cheboksary Electric Apparatus Plant on November 26. Accompanied by the plants Director General A. Fedotov and other heads of the factory, he examined the assembly lines of low-voltage package modules. “India is interested in deliveries of electric equipment by the electric apparatus plant,” Malhotra said.

According to the Chuvash Economic Development Ministry, India has the largest share (7.1 percent) in total exports of Chuvash companies.

Malhotra also visited the Sverdlovsk Region on the invitation of Governor Evgeny Kuyvashev on September 4-6 and discussed with him ways to enhance bilateral cooperation in trade, economic, S&T, educational, cultural, and other fields.

India’s trade with the Sverdlovsk region was worth $315 million in 2011 and it has long standing ties with “Uralmash” in Ekaterinburg, “Uralvagonzavod” in Nizhniy Tagil, “VSMPO-AVISMA” in Verkhnyaya Salda, and several other enterprises in the region.

Malhotra noted that during 2011-12 there had been a good increase in Russian tourists travelling to India from the Urals and from Siberia, in general. Ways to further boost business and tourism were discussed.

He also informed Kuyvashev about the visit of a delegation of Indian scientists, led by Dr G. Sundararajan, Director, Delhi-NCR Branch of the Indo-Russian Science & Technology Centre, to Verkhnyaya Salda, Sverdlovsk region, in early September to explore partnership with “VSMPO-AVISMA” for producing titanium based products in India.

The Indian Ambassador visited the Ural Geological Museum (which Jawaharlal Nehru and Indira Gandhi had visited in 1955) that is part of the University.

In August, Malhotra visited the Irkutsk Region and held talks with regional governor Sergei Yeroshchenko on August 27 to explore the ways to intensify bilateral cooperation in trade, economic, S&T, technology, educational, cultural, and other fields. India’s trade with the Irkutsk region is expected to reach $300 million in 2012.

He also visited the Irkut Aviation Plant and met its Director General Alexander Veprev. It may be recalled that a Protocol on licensed production in India of an additional 42 SU-30 MKI Aircraft, was signed in Moscow in mid-December 2011 during the visit by Prime Minister Manmohan Singh to Moscow.

During his visit to Kursk region on August 21-22, Malhotra met with Nikolai Ovcharov,  the Kursk City Administration head, and explored ways to intensify bilateral cooperation in different fields. It was also agreed that Kursk would host a festival of Indian films, besides other cultural events showcasing India.

On June 27-30, Malhotra visited Bashkortostan and met with republic’s governor Rustem Khamitov in Ufa. Both sides expressed satisfaction that India has long-standing and close ties with several institutions and organisations in Bashkortostan. The trade between Bashkortostan and India is currently $250 million annually. The sides discussed the prospects for intensifying trade and economic cooperation, including in fields of aircraft engines and oil and gas.

It was agreed that India would participate in the Third "Big Chemistry" International Forum to be held in Ufa in May 2013.

Earlier this year on March 12-15, Malhotra paid a visit to Kazan, the capital of the Tatarstan Republic and held talks with its president Rustam Minnikhanov, key ministers and other high-ranking officials. Both sides agreed to further increase the bilateral cooperation potential.