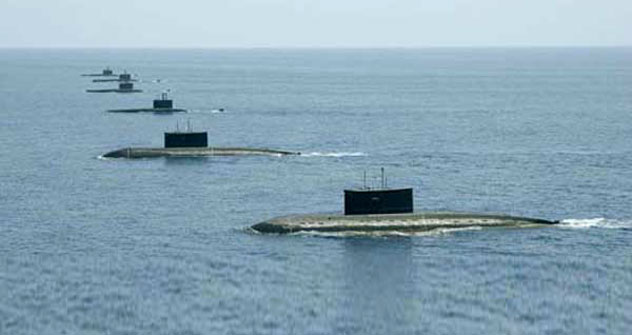 Rosoboronexport would be high among the competing companies for a $10 billion deal to supply new generation submarines.

India is set to loosen its purse strings for some big ticket arms acquisitions in the coming months. The latest order about to come out from the Indian repertoire is for submarines, which is going to be worth a whopping ten billion US dollars. The Russians will be close competitors for this deal and Rosoboronexport of Russia would be high up among the competing companies. Other serious contenders would be HDW of Germany and Navantia of Spain.

Earlier this year, India had released a 15 billion dollar defence deal which went to the French, much to the chagrin of the Russians and other players in the international arms market. In February 2012, India had awarded the highly lucrative deal worth $15 billion to the French company Dassault Aviation for 126 fighter aircraft for the Indian Air Force.  The talks with Dassault on fastening the nuts and bolts of the deal are presently going on.

The upcoming defence deal is for the Indian Navy. It is aimed at buying six state-of-the-art submarines, mainly with an eye on China. The deal with Dassault for 126 fighter aircraft too was aimed at developing Indian defence capabilities vis-a-vis China.

The Indian government is soon going to come up with a Request for Proposal (RFP) for six next generation submarines. Indian Navy Chief Admiral DK Joshi has gone on record as saying that the Defence Acquisition Council a high-powered body of the defence ministry, has already given the green signal for buying six submarines under a project codenamed P-75I and a global tender would be floated “very soon”.

This will be a huge opportunity and a challenge for the Russians to bag the deal because the RFP would be a global competitive bid process in which the winner takes all. The Russians and the French are expected to be among the top contenders. Both would have plus and minus points for getting the deal, and needless to say, no country would like to miss the bus.

Russia will inevitably face a stiff competition from the French for the new submarines deal. The French have an edge because they are already building six Scorpene submarines for India. The argument for them is that since they are already working on a submarine project with India it would be logical to have continuity as the French already have an elaborate infrastructure in place. But the flip side is that the upcoming $10 billion submarine deal would be a global competitive bid. It is like playing an entirely new match on a new turf where it would depend on which players emerge as performers of the day.

The Russian USP would be that India is already operating over a dozen Russian-made submarines and Russia is a tried, tested and trusted arms supplier for India. The latest order, as an when it materialises, is aimed at significantly beefing up the muscle of the Indian Navy whose existing humble submarine fleet comprises of just 10 Russian Kilo-class, four German HDWs and an Akula-2 nuclear-powered attack submarine leased from Russia at $1 billion. This will be in addition to the six Scorpene submarines which are being built in India with technology from Dassault under a project codenamed P-75.

A USP of the new to-be-ordered submarines, according to Admiral Joshi, would be that these would be bigger than the Scorpene  and would be equipped with air-independent propulsion (AIP) systems to recharge their batteries without having to surface for more than three weeks. Besides, the new boats would also have land attack missile capability.

The Indian submarine fleet got a valuable addition when INS Chakra, the nuclear submarine from Russia was finally inducted in April 2012, thus once again heralding the Indian Navy into the nuclear age after an interregnum of two decades. However there is a flip side to INS Chakra, the Akula-2 class submarine given by Russia to India on a lease for ten years. INS Chakra cannot be armed with strategic weapons or nuclear tipped ballistic missiles. Its symbolic importance is that it will certainly help India keep a watchful eye on the vast expanse of Indian Ocean which of late has emerged as the epicentre of global naval activities.

Related: ‘Chakra reincarnation’ on the eve of a memorable date

India, a principal littoral state with fourth largest naval fleet in the world, needs to have a robust navy in Indian Ocean and beyond considering the rapid advancements of the Chinese Navy. China is stepping up its naval presence in the Indian Ocean though it is not an Indian Ocean power. China has almost five dozen submarines, including a dozen nuclear submarines, which give them a head start over India in naval terms.

The upcoming RFP for the six submarines is aimed at correcting this anomaly.  India, which at one point of time had 18 submarines, is now down to just 14 submarines, including ten Sindhughosh class Russian Kilo submarines and four Shishumar class German HDW diesel submarines. For 17 years India did not construct indigenous submarines. Further bad news from the Indian perspective is that its submarine fleet is expected to go down to half as the Kilo class submarines acquired in late eighties are facing retirement after two and half  decades  of service.

Under the six-submarine Scorpene deal, India is expecting to get the first two submarines in 2014 and 2015. The delivery schedule for all the six boats is likely to be completed by 2019. But the flip side is that the first two out of six would be simple diesel submarines and the next four would be equipped with Air Independent Propulsion (AIP) technology called MESMA in French parlance.

This is where the Russians can smell the kill for the new $10 billion submarine deal. While the Scorpene deal with the French did not focus on the AIP technology, the proposed deal would have all six submarines equipped with AIP technology.  The Russian engineers have already mastered the AIP technology, in vogue for the past one decade. India has retained Russian engineers since 2011 in Vishakhapatnam to understand complex operational aspects of a nuclear powered submarine.

The writer is a New Delhi-based journalist-author and a strategic analyst who can be reached at bhootnath004@yahoo.com